18. Picking : During printing one can sometime notice that the surface of the paper has been slightly lifted showing the area scratchy. This problem occurs due to the high tackiness of the ink which plucks away the paper fibers during image transfer. The reason basically is due to the use of ink which mismatched with the type of paper used in printing. 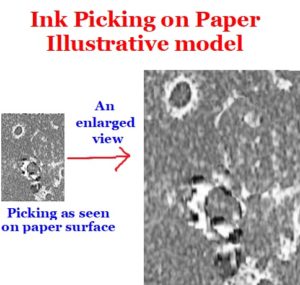 19. Prismatic Printing : This term is also called as Rainbow printing. Rainbow printing is a special printing technique where a background is printed in two or more colors from the same printing plate in single run. The effect is achieved by putting different shade of ink in the same duct from where the inks are supplied to the plate through the form rollers. Different shades of inks will be put in the same duct with a small divider that does not allow the inks to merge in the duct. But the different shades of inks flowing from the same duct will cause the rainbow effect due to the oscillation ink rollers which merge and blend the shades where they meet in the roller. (See illustration to understand this concept clearly) . This is considered to be one of the security Overt (Seen visually) feature in the art of security printing. The special varying effect is very difficult to reproduce by a scanner, computer or copier.

The Penetrating inks contain a special Red colored dye that penetrates into the paper surface to show trace of Redness on the back side. Another variety is that the Red strain is seen around the printed image. Both the type of inks are used in the numbering only and are patented products of few firms. If some one try to rub off the ink, the Red strain will show of the theft. Such Penetrating inks are mostly used for MICR numbering on Cheques and also on the numbering for Lottery tickets, Raffle tickets, Bank Bonds, Several Legal documents etc. The migration of inks serve as one of the security features to authenticate the documents by special gadgets which pick up the specific wavelength and authenticate the genuineness of the document. The penetration also depends on the substance used and therefore the ink maker will have to be told on which the authentication will be required so that suitable inks can be supplied. 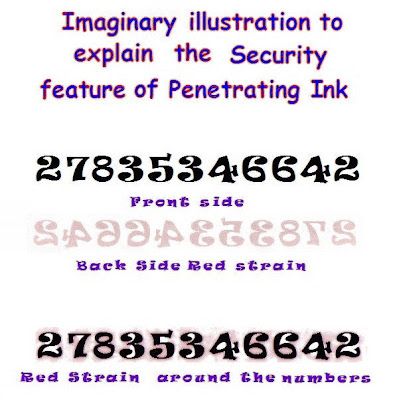 21. Process Inks: Process ink means the transparent inks that are specially formulated for use in four color process printing or the four color inks used in Flexo, Gravure processes except Silk screen where the four colors are opaque in nature. The four color Process inks are Yellow, Magenta, Cyan, and Black shortly named as CMYK (K means black). While the four color inks are superimposed on top of the other to create the illusion of many more colors in Letterpress, Offset and Flexo processes, such effect can not be achieved by Silkscreen inks Intaglio inks as the process inks used in them are Opaque colors in nature.
………..Additions to alphabet P to be continued under P/5