Some interesting information on Bank Notes:-
The bank notes issued by the Reserve Bank of India are in packets of 100s. The earlier practice of stapling the 100 note packs – carried out since introduction of the Bank Notes – have  been discarded two decades ago  as they cannot be used for dispensing the notes by ATM. Also the life of the stapled notes were far less than the non stapled notes.  Similarly one more deviation in  the usual practice was introduced by RBI by introducing Star Series Notes.
The Bank Note production process is complicated and involves several procedures and steps. One of the standard practices followed universally is to issue the  bank notes in bundles of 100 notes, each 100 notes placed in sequential serial order beginning from one particular no. During the production process especially during  numbering process, as is normal in any other printing process, some sheets get printed with some unforeseen, unavoidable  printing errors called ‘numbering defects’ thus disturbing the continuity  and therefore they have  to be replaced.
The Process, Paper and Inks used for Bank Note Printing being costly, the entire defective sheet containing defective/ wrong numbers in one or two notes in  whole sheet cannot be expected to be destroyed  totally.  Moreover in order to simply replace few defectively numbered notes the entire process cannot be redone to get correct  serial numbered note because the process is  time consuming and also involve additional cost. This is not the case in India alone but is universally faced phenomenon.
Therefore in  order to reduce the cost  a new practice was introduced  to issue specially numbered notes called ‘Star Series’ which will not have sequentially numbered serials in a bundle of 100 notes.  Such Star Series  notes were inserted replacing the defective notes in the bundles containing  100 nos of serialized notes. The Star Series note bundles  though will contain 100 notes per packet may not have sequential serial   beginning from a particular number and may contain one or two Star Series numbered note s  in  between.
The Star Series Notes will be printed with a special mark like a Star symbol  in  suitable place in the numbering panel to identify that the 100 note packet is Star Series numbered notes. Since no two serial numbers can remain  the same, the note is simply printed with a  Star mark symbol in the serial number panel, identifying it as a replacement for an error notes.

For example in a bundle of 100 notes, there may be few wrongly numbered  notes, say, from 97 BA 552701 to 97 BA 552710 one note may have been wrongly numbered and need to be replaced. The replaced note  will be something like the one  illustrated below: 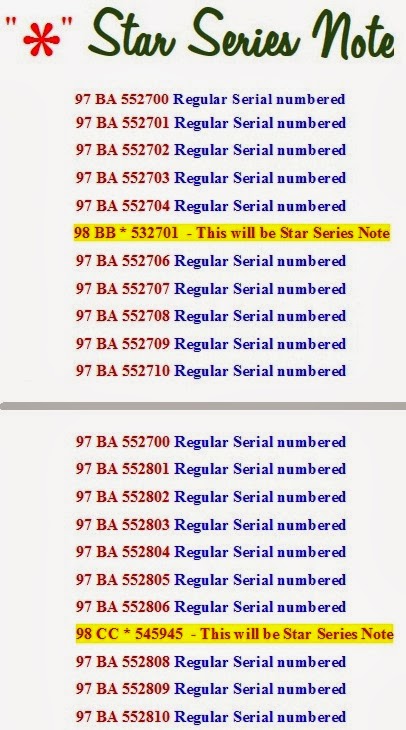 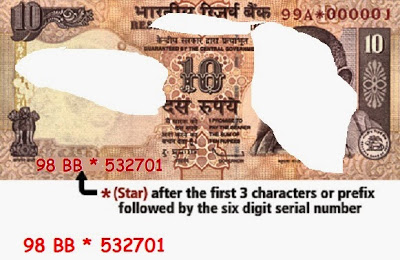 The Bank Notes issued by RBI prior to 2006 were in sequential number. No bundle had discontinued serial number. In this process whenever the  notes were seen to contain wrong  numbers they were separately printed and inserted in the bundles of 100 notes replacing  the defective numbered notes.  This process was time consuming, involved several avoidable and repeated process cycle in addition to  increase the cost of printing.

However as the said process continued  over the years,  keeping pace with international best practices, in India too the Reserve Bank too commenced issue of ‘star’ series of bank notes from 2006 in various denominations like Rs 10, Rs 20 and Rs 50. RBI adopted  Star Series numbering system for replacement of defectively printed banknotes.

The Star series banknotes were exactly similar to  the existing  Mahatma Gandhi Series banknotes, but with an additional character say a star symbol like * in the number panel in the space between the prefix (Two Alphabets printed followed by numerals) and the serial number. The 100 note  packets containing those bank notes will not have sequential serial numbers, but contain 100 banknotes, as usual. To facilitate easy identification of the bundles that carry star series notes, the paper bands that are fastened on 100 notes bundle carried captions like ”contains non serially numbered notes” .

Some of the other countries that introduced star series notes were the following:

One rupee note – Coin or Currency?