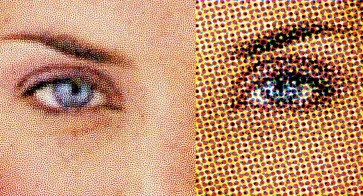 FM and AM Screen

The Halftone screening process first surfaced in the year 1878 and dominated the industry in the next 200 years and still continues to be the main process of reproduction in small print units. To our knowledge the halftone screening technique was not in vague Wet Collodin photographic reproduction process (where a glass plate was hand coated with sensitive photographic emulsion, exposed, developed and dried for making printing plates) of making negatives for production of printing plates was introduced. The Wet Collodin process was introduced in the year 1850.
The halftone screening process commenced only with the advent of Glass plates and then extended onto polyester films some of which were at later stages developed as auto screens content films too. The photographic film embodying the invisible halftone screen, called auto screen, when exposed to a continuous tone image, produced dot pattern of the same image as if a halftone screen had been used in the camera.
The Halftone screening process is the reprographic technique that converts the continuous tone image into dots of varying size, shape and spacing between dots to show gradient like effect similar to the shades in the original. 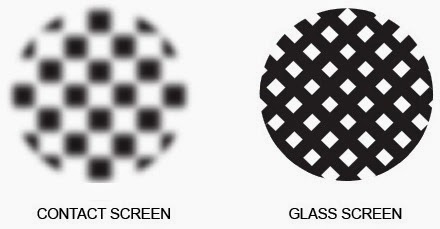 Halftone images are created using a ruled glass screen which has lines crisscrossing in opposite directions forming a grid like pattern to break up the continuous tone image into tiny dots of different sizes. The glass screen consisted of two sheets of optical glass with fine parallel lines etched on one side of the glass, those lines filled with a black opaque pigment. Both the glasses when sealed together with the etched surface facing each other, the parallel lines crisscrossing each other at right angles left transparent openings in between them that produced dots. The formation of the dots produced by the glass screen depended on the distance from the film to the screen, size and shape of the lens aperture, intensity of light, the length of exposure, and the speed and contrast characteristic of the film in use.
The halftone screening process also employed Contact screens made of color dyed film based emulsions as against glass plate based screen. Three varieties of contact screen were made available, namely Magenta, Grey and Orange contact screens, each by different manufacturers for specific purposes. The contact screen is made up of vignetted translucent dots on a film base instead of crisscross lines. Their use is almost extinct now.
In the contact screening process, as the name implies, they are used in direct contact with the sensitized material. The use of these screens freed the operator from setting screen distance, lens openings etc as they have no effect on dot formation.
The principal difference between the glass screen and the contact screen is that each of the dots formed in between the opaque lines in the glass screen are uniformly transparent and each of the the dots in the contact screen have variable density. 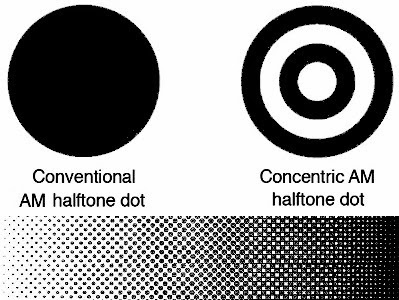 The Conventional screening is referred to as AM (amplitude modulation) screens, or amplitude modulation with screen rulings such as 150 lines per inch- referred to as lpi, 175 lpi, 200 lpi. Amplitude (AM) screening modulates the screen area by changing the size of halftone dots that are in an ordered pattern in a given area. This has been the typical method for creating halftones and process screens for the last 100 years or more. The traditional technique of creating screens i.e. amplitude modulation (AM) produces a regular grid of dots that vary in size that represented the tonal gradation. Traditional amplitude modulation halftone screening is based on a geometric and fixed spacing of dots, which produced dots of varying sizes depending on the tone color represented. In AM screening process, the printable dot gets transformed as irrational imaging i.e. dots transformed into variable width of dots in numerous permutation combinations like round dots, oval dots etc.
In AM half toning, the density of dot clusters, which we define as the number of clusters per unit area, is fixed. The most commonly used AM half toning algorithm is clustered dot screening. One drawback of cluster dot screening is its limited ability to render fine detail and are vulnerable to moiré patterns. Thus, it is not fully suitable for half toning images scanned from printed material.
While conventional screening referred to AM screening process, Stochastic screening (Staccato) process refers to FM screening. Frequency screening (FM) modulates the screen area by changing the number of randomly distributed dots of the same size that appear in a given area. This is the method used in the various stochastically driven methods for creating screens and halftones using special software. The frequency modulation (FM) processing is a halftone process based on pseudo random distribution of halftone dots generated through software application. No special screen like glass screen or contact screens are separately put to use in this process and only suitable software inbuilt equipment converts the continuous tone images to printable tonal image.

Frequency modulation (FM) changes the density of dots according to the gray level desired but not the size of dots. The stochastic screening or FM screening uses fixed size of micro dots and shades are obtained by varying the density of the dots as reflected by the color tone in the original. The micro dots are rendered as though they are weaved together to create true and smooth tonal variations. The technique of stochastic screening, which existed since the seventies, has had a revival in recent times thanks to increased use of computer to plate (CTP) techniques. 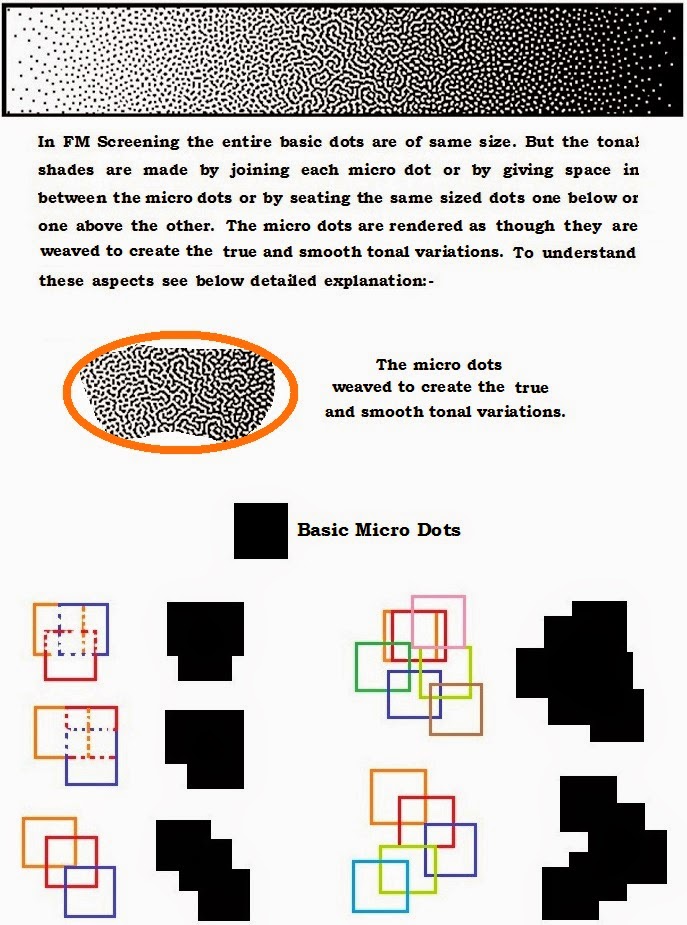 The basic micro dots which are fixed in size and produce the shades in the images by sitting one on top of the other, sitting side by side, sitting in half area  or one third of other dot or sitting at a distance etc. The shapes of basic dots may differ depending on the selection of screen pattern in the software used.It can be square, round, elliptical or even oval.

In respect of multi colour separation negatives or positives, the dots sit in rosette  pattern (see illustration) to reproduce the colour effect. Sometimes recopying the coloured printed original will cause moiré pattern that will disturb the true reproduction. The FM process eliminates the moiré pattern as the FM screening process does not create rosette pattern producing dots. 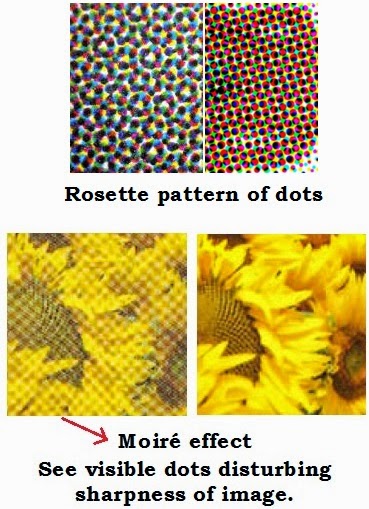 FM Screening helps printers produce high fidelity, artefact free images that exhibit fine detail without halftone rosettes, without causing moiré effects, gray level limitations, abrupt jumps in tonal values etc. It places dots of the same size, in different concentrations, to reproduce continuous tone. With the FM method, it is possible to produce very fine detailed print, highlight, and shadow areas, and eliminate the moiré and broken lines associated with AM screening. FM screening software also improves colour and halftone stability on press.
In one process of FM half toning, the dot density, spacing between dots and the dot size gets automatically measured to determine the screening process as the printed tonal value depends on the combination of the three factors. This process also allows the operator to incorporate tone correction wherever necessary i.e. the dot density and size of dots to match the original. Depending on the print process chosen, the sizes of the dots will be modulated in the software. Remember that the dot density and dot size are critical parameters of any FM half toning algorithm and therefore the original i.e print out for reproduction by FM process is converted into grey level image first.
Some of the FM dots and patterns
Then the  the halftone patterns are generated by printing gray patches with varying dot sizes and dot densities and they are compared with the tonal values of the original to finalize the  absorbance values of the pixels in each shade to determine final processing.

How to balance Taggant with Ink -2

How to balance Taggant with Ink – 3 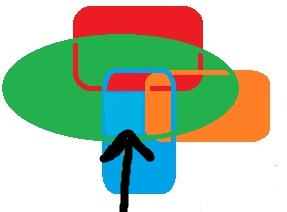