8. Screen Printing : One of the printing process in which the inks are squeezed through a screen to form the image. The screen is also called the stencil. The ink is forced through the mesh screen opening by rubbing it with a hand held squeeze in the hand operated screen printing machine or in the automatic machines. The  same act  is also done with the help of  a revolving roller positioned inside the cylindrical shaped stencil machine.

The process of making the screen with image is simple. A fine mesh special screen meant for screen printing is mounted tightly on a suitable frame and then coated with a light sensitive coating. The same is exposed through a positive (Not negative) and then washed. The image areas will leave out the coating thus making them pores while the non image areas will become hardened and blocked thus not allowing the ink to travel through. 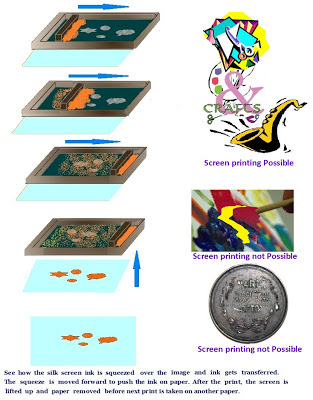 This process is popularly used for making invitation and greeting cards, Table calendars, Display posters, on clothes etc. Multi color illustration can also be produced provided that they are cut color i.e, where the secondary or tertiary colors are not required to be produced by super imposing color on color. Therefore multi color halftones cannot be reproduced by Silk screen process because the superimposing of dots, one on top of the other in 15 degree angle can not be perfectly done. Also the secondary, tertiary colour effect can not be produced even using colour separated halftone work. However the halftone images can be produced provided they are in single color. Though smaller jobs are done by hand operated process, the screen printing is also done on semi automatic machines and on Rotary machines. Special machinery and equipment are all available for such purposes.

9. Screen Tint : Tint means a flat color – preferably lighter shade- of any sort. The tint color is printed on the paper by specific size solid design element using lighter shades of inks to form the background on which the text or other images are printed. However instead of printing the solid color which will consume more ink, the lighter background is also printed using halftone dots or other Benday screen type of patterns called Screen tints that will give the same shade when printed. The overall image display will be same as solid printing. It is not necessary that the background tint should be created only through halftone dots. Various other design elements are also available which can display the shade like a solid tint. All these tints are generally known as Screen tint. 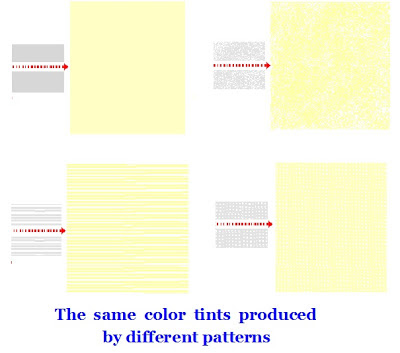 10. Screen Angles : The screen angle refers to the halftone screens used for color separation and black and white work to convert the continuous tone images into printable image through a process camera. While for black and white work, screen angle of 45° or 90° is used, in the case of multi color printing, different angle screen will have to be used while making negatives to pint Magenta, Cyan, Yellow and Black colors. If different angles are not used, then all the dots will fall one on top of the other to produce one color image. Therefore the screen angles with a difference of 30° is made to cause juxtaposition of dots i.e. printed side by side. The common screen angles for color separation work is Magenta 75°, Yellow 90°, Black 45° and for Cyan 105° or 15°. 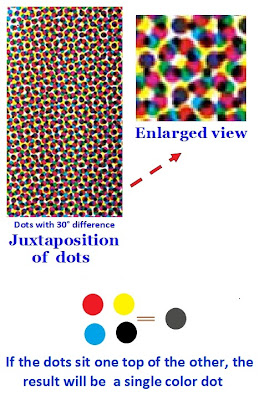 11. Separators : The Separator is a nothing but a stopper or a divider that is used in the ink duct to ensure that the inks put in the fountain do not get mixed up with other color in the duct if more than one color has been put. Even when only one color is put into the ink duct, the separators are still placed in such a manner that the inks are supplied to only the portion where the print image is to be inked. Supposing the text and images are only in the center of the plate or only in the two edges, the ink need not be supplied to the other areas on the plate i.e non printing areas. This will reduce consumption of ink. (See the illustration to understand this) . The separators are made of either cast iron metal or on thick plastic material. The Separators will have half-moon shape in the front side while the back edge will be conical shape whose angle will match the ink duct fountain body. A Separator of one machine can not be used on another machine ink duct since they can differ in the angle and size of the duct. 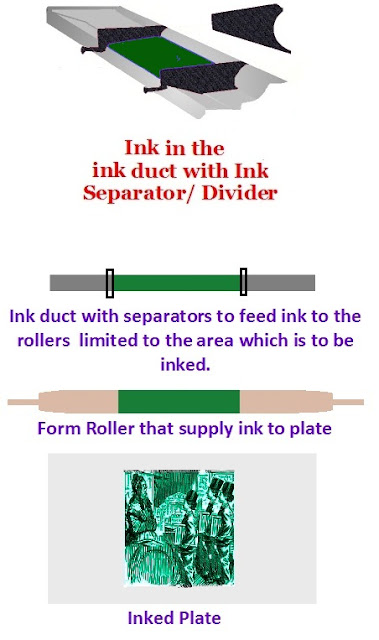 12. Serif: Each type face of the type family will have a cap like appearance or a small decorative line like square, hairline etc added as embellishment to the basic form of a character on the ends of the letter strokes. Such extended portions are called Serif. Serif fonts are widely used in traditional printed material such as books and newspapers. Some may not have any cap like appearance and will be plain faced. They are called San Serif faces. San means without and therefore San Serif means Type faces without Serif. 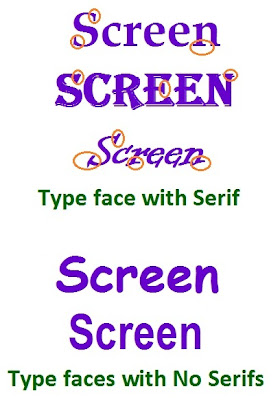 ……….Additions to alphabet S to be continued under S/3