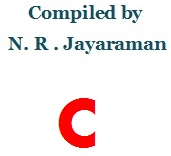 15. Computer-To-Plate: Called CTP, by this technology the design to be printed is directly transferred on to the plate by digital process eliminating the traditional use of process camera in which the negatives or positives are first prepared  followed by plate making process to make ready a plate for printing. Earlier the direct computer to film technology called CTF, was introduced to directly prepare the negatives or positives from the originals without intervention of process camera   followed by the development of CTP by which even preparation of the plates for the Intaglio process was made possible. While processing of negatives and positives and plate making process were eliminated for the production of direct printable plates by Dry Offset process, in the case of Intaglio process of printing, the images are directly engraved on the Intaglio plates. This eliminated the manual hand engraving process in which a master die had to be first prepared engraving on a metal plate from which several moulds were taken, assembled and master plates prepared by electrolysis process. From the master plates thus prepared  multiple plates for printing by Intaglio printing machines had to be made.
Again while the CTP is based on chemical free technology, and Eco friendly, this will not suit small presses due to the cost involved in establishing such equipment. Some of the leading firms which offer varieties of CTPs and CTF technology includes Agfa, Fujifilm, Glunz & Jensen, Heidelberg, Kodak, Mitsubishi Imaging, Screen (USA), KBA Giori, Komeri etc.
16. Contrast: The tonal range in the original i.e gradual variations from the lightest and darkest colors in an image can be expressed as contrast.  A good contrast original will show the tonal values gradually flowing from light to dark in several areas, where as in the flat original, there will be less graduation from light to darker areas. You can see the illustration below to understand the term contrast in an original.
In general three tones govern the contrast. They are called Highlights, Middle tones and Shadows. If you see the grey scale  below you will understand the three terms. In an original the tonal values should gradually flow from highlight areas to shadow areas to give clarity to the images. Unless the original  have gradual tonal values,  the resultant print  will appear to be flat. A full contrast artwork will have complete range of tonal values, from white through middle tones to dark areas called shadows. The light and dark areas of the original contribute more to the success of a original’s composition than any other factor, including color. Therefore contrast is an important factor to guide the  designer/artist in forming an image for reproduction. Similarly the term also guides the photographers to make  pictures showing various tonal values for better reproduction. Even if the picture had less tonal differences, to some extent they can be corrected in the process work while taking negatives or positives. They can be adjusted by suitably changing the apertures to control the reflected light for highlights and shadows. 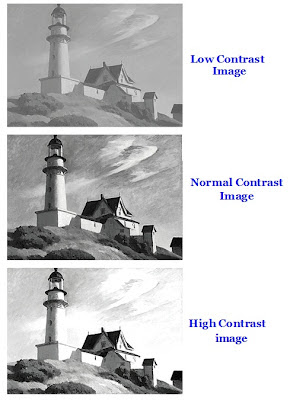 18. Crop Marks: This is nothing but marks meant for guiding trimming area. They are printed as lines , cross marks etc at the edges of a printed sheet indicating where the paper is to be trimmed. Some of the printers prefer to use the crop marks as register marks instead of separately using a register mark. 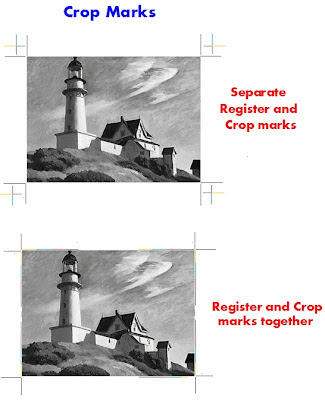 19. Carbonless Paper : Special variety of paper coated with chemicals on  their  back side to produce second or third copies with pressure from writing or typing thus avoiding use of Carbon paper for making multiple copies. The paper is coated with micro encapsulated dye or ink or some sort of reactive clay for this purpose. However the coating will remain invisible to naked eyes. With pressure from the tip of the pen or typewriter keys, the micro-capsules of color dye breaks and form images by a chemical reaction with the color acceptor on the surface of the  front side of the front side coated sheet below. These paper eliminates the use of carbon ribbon or carbon paper thus increasing the efficiency of the user as time wasted in keeping the carbon paper in between sheets, then removing them etc are saved. These are used by business concerns to produce duplicate, triplicate copies in the business deals.

20. Chalking : This is one of the defects attributed to Ink-Paper relationship. The images on the printed stocks appear to fade away or show dusty image after the sheets are printed. The deterioration on the printed image is caused by ink carrier vehicle that gets absorbs into paper too fast leaving the ink pigments in semi wet condition on the paper surface or are not getting properly absorbed into the paper thus causing improperly-dried ink getting rubbed off from the surface of the paper. This powdering defect is due to the ink that has not been properly formulated to suit the paper. The other possible reasons for this defect could be acetic paper, fountain solution too acetic (in wet offset ),too soft an ink which emulsifies etc. 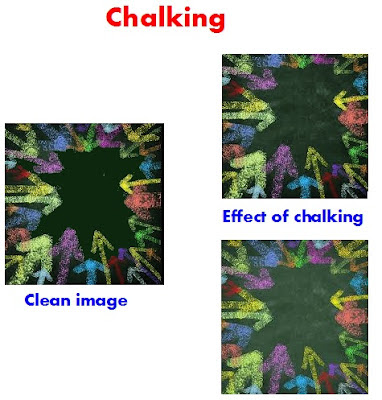 21. Coarse Screen : This term is applicable both in Process reproduction as well as Silk Screen printing. The continuous tone originals are converted into printable form by the use of something called halftone screen. The halftone screen (Read  further under Halftone Screen) Halftone screen breaks the tonal values into minute dots of varying sizes while preparing negatives through process camera. The halftone screens are made up of fine ruling of lines that cross each other leaving small gap between them. Such screens are made with different screen rulings. The resolution of a halftone screen is measured in lines per inch which is indicated by the term ‘lpi’. Therefore the resolution of the screen is written as “150 lpi” or “150#”. The term Coarse screens refers to screens having 65, 85 or 100 lines per inch. For finer work fine ruling screens such as 250 lpi and up to 400 lpi are used. 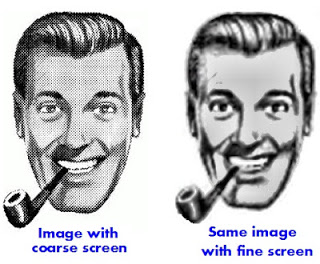 22. Color Separation : Color separation is the process by which original color artwork is separated into individual color components for printing in certain sequence. The components are cyan, magenta, yellow and black, known as CMYK. By this process the colored originals are first converted to printable image using a process camera or a scanner. 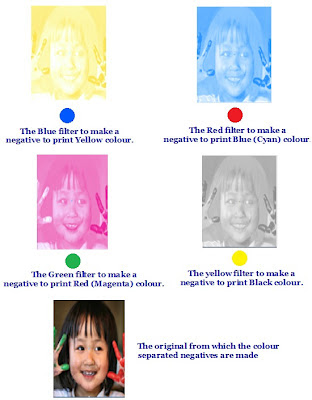 …………Additions to alphabet C to be continued under C/3