2. Emulsion : Though there are two types of emulsions referred, when some one refers to emulsion, it is meant to be for the photographic films or photographic papers. The emulsion is a chemical coating material   spread on a gelatin or plastic material. It is a mixture of  light-sensitive chemicals like silver halide and similar silver salts and other  chemicals which when exposed to light rays, turns them into proportionate black in colour commensurate to the quantum of light received.  The emulsion is the heart of the photographic  papers and  films.

Silver halide grains are irregularly shaped crystals like pebbles, or grains of sand and is found to be a very useful material for coating on photographic emulsions as sensitizer.  The size of the crystals determine the sensitivity of the film, contrast and resolution rendered by them after exposure to light. The gelatin supports, separates, and protects the crystals. The typical emulsion is approximately 10 micron thick. In short the emulsion is main part of the film that records the image by physically reacting to light that reflects from the original being processed. 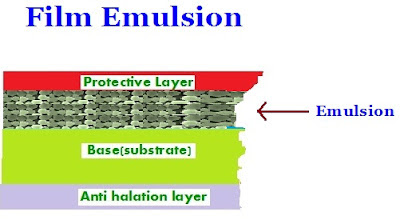 Even after exposure to light, the silver halides or silver salts in the emulsion   remains invisible to naked eye called latent image till they are treated with special chemicals called developer to convert them to black image visible to naked eye. While there is usually one layer of silver salts (emulsion) in black-and-white photographic film, in the case of panchromatic films (colour), the crystals are formed in  three different layers (emulsion).

In the case of black and white films when the exposed grains are developed using certain chemicals, the silver salts are converted to metallic silver, which blocks light and appears as the black part of the film processed. In the case of colour films each of the three layers in the colour film will remain sensitive to one specific wavelength of the emitted light rays and when exposed, the silver salts are converted to metallic silver, just as with black-and-white film, but when treated with the chemicals known as developer, they get converted to colored dyes.

The second type of emulsions referred are pre-coated material found on the sensitized ready to use printing plates and stencils which  becomes hard and not black when exposed to light source. The hardened areas are then treated with certain chemicals to make them ink receptive.

3. Etching: Etching is the  process of etching away or removing the metal from  the unexposed areas of the  light sensitive coated and photo processed metal plate. The metal plates in use for the preparation of  printing plates are many such as Aluminum, Zinc, Steel, Copper and Bronze etc.

After coating the metals with light sensitive coating,  which when exposed and treated with certain chemicals, the  unexposed portions of the plates are removed to allow only the  relief image remain on it  for printing. Thus the process of facilitating  removal or lowering the height of the non image  areas below the surface of the image areas of the metal plate  by biting away the areas with the use of certain selected acids and chemicals is  called the etching. The longer the plate is exposed to the acid, the deeper the pit they will cause.

When more different depths of undercuts (pits) to give sufficient relief to the images for printing are required, then it is  achieved by covering some areas or lines in the images with acid-impervious coating (stop-out) and continuing the etching process a second or third time till satisfactory result is acieved . The illustration will show how the process of etching is used in three basic techniques of image making.

4. Electro photographic process: This is a general term given for the  Xerox process in which the Selenium coated plates are used for copying the originals on to the plates and  then taking away copies from the selenium plates which is treated with a toner before the copies are taken from them. This process works on the principle of corona discharge. In short, this is also one of the branches in the family of the printing process and works on the  principles of  electrically charged areas  accepting and retaining special powders called toners  to create images on the electrically charged areas of the selenium plate to  transfer them on to the paper.

5. End Sheet or End Paper : This is a bindery term for the sheet that bonds the inside pages of a bound book stick to its cover (Wrapper). In short this is nothing but an attachment to cement the entire printed material of the book  with the thick cover material attached on both ends of the book to protect them like a wall.

Normally the end papers will be thicker than the main printed sheets and are pasted on top and last page of the  printed book  so that one leaf from each of them will get pasted with the cover at both ends while the other leaf  will remain as empty page when the book is opened. In other words the end paper serves as a protective sheet for the title page or other leaves that follow it including the last sheet of the book. See illustration below to understand it better. 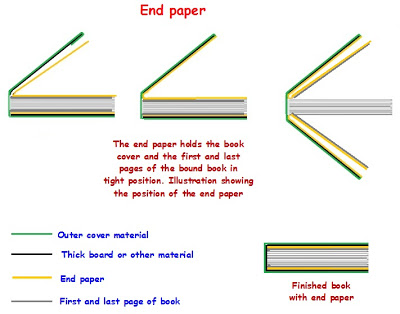 6. Engraving : This term need not be confused with etching. It is an art whereby the images required to be printed are engraved i.e cut into the surface of a metal. The engraving is done either by manual process using special tools or by special engraving  machines. An expert engraver can engrave various shades of the images on to a metal plate with  his skill and experience. The  engraving process forms an important process in the Intaglio printing process, especially for security printing purposes. 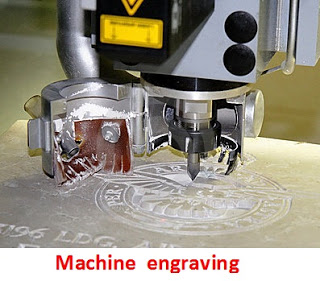 7. Effluent: Effluent is the liquid discharge or waste products of the paper making process, or printing process. The effluents in the printing technology include small amount of suspend solids, contaminated water, dissolved chemicals, inks etc. Effluent is usually discharged into rivers or if the effluent generated is of huge volume, a separate plant is set up to treat the waste to environmental regulations and then discharge them in a suitable manner into the land or river. Stricter law governs the effluent discharge.

8. Easter base: This is a substrate used for the production of films and is a proprietary product of Kodak film company. This substrate has the quality of high dimensional stability.

9. Estimate : Technical term meant for calculation of various factors including the cost. By proper estimation, the requirements of various material to complete the work or book of ‘n’ no of pages, approximate time that may take to complete the work etc can be calculated in a press. A prospective buyer always desire to know beforehand the probable cost of the printed material which he propose to get printed.  The estimates should be near accurate, lest, the customer will not be satisfied and go away or the printer will incur loss due to wrong calculation.

10. Estimator : The individual who works out the  the time frame required for each work related to delivery of the product produced. Accuracy of estimation is possible only when an estimator knows exactly what operations are involved in a job and how long a process normally takes for completion. An estimator need not be an expert in arithmetic, but near accuracy in analyzing the time factor and cost of each  processes involved are necessary coupled with speed in estimation. Most of the running presses  have standard rates for calculation of a fixed variety of job like printing of letterheads, small booklets, visiting cards, greeting cards, single page pamphlets etc on ‘n’ size and quality of paper with ‘n’ no of sheets in ‘n’ no of colors. However for work of huge quantity and size, and multi colour work, the estimate will have to be carefully worked out. The model sheet of estimating a work is given in E/2