7. Page proof: Every printed material whether book, circular, pamphlet, leaflet or any other print material will have some text material or some images. The first task of book printing is to compose the text material or the manuscripts into a printable format. Once the matter is composed, the composed matter will have to be corrected for mistakes if any to match with the original manuscript or copy.
It is customary to first make corrections on the composed text material and compare it with the original for making corrections if any and then they will be split into pages. So the page proof showing the actual position of the matter in each page along with the illustrations (blank spaces will be left for accommodating illustrations)  will be submitted only in second stage.
In the cases where the  books are printed by letterpress printing, the composed matter will be submitted for correction in the form of galley proof, i.e  continuous text material without any pagination.  After the entire matter is composed and corrected, the pagination i.e splitting them into pages   will be done, which may include the spaces for illustrations, headings, sub headings, page nos etc. The paginated proof will be submitted for second correction mainly to see continuity of the texts in pages and they are called Page proofs. The copy thus  given in page form for correction is called the Page proof. 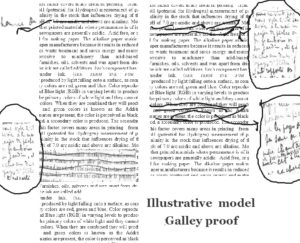 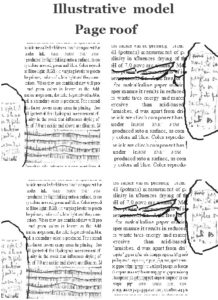 In the case of Offset printing also initially the composed text matter will be submitted for correction in sheets either in page format or in sheets containing continuous composed text similar to the Letterpress proof where the initial proof submitted is called Galley proofs. In Offset they are not called galley proofs, but are called first proof. The first proofs of the composed matter for Offset printing may or may not  be in the form of pages but not numbered. Once the first proof is read and corrected, they will be paginated i.e split into pages, headings and subheadings in appropriate size  inserted, spaces kept for incorporating illustrations and submitted as Page proof for correction.  The copy thus  given in page form for correction is called the Page proof.
8. Proof Readers Marks: Whenever some manuscript is taken up for printing, they are to be first composed by some means- hand composing for letterpress printing, mechanical or cold composing ( typed on a suitable font incorporated  electronic typewriters  or by photo processor like word processing or in some other means of type setting including composing on computers for Offset or Flexographic printing) . Once the manuscript is composed and made ready, the errors and mistakes in the composed matter  like spell mistakes, missing words or letters, missing parts, insertion of suitable symbols in appropriate places, paragraphs beginning and end etc are to be detected and indicated for corrections with suitable marks which are universally understandable to the typesetters and composers.
Those special marks have been developed as each and every correction can not be explained elaborately in writing which will be time consuming. Therefore certain simple characters  named  ‘Proof Readers Marks’ have been created to communicate between the person pointing out the the correction and the compositors who will  understand the meaning of those marks and  make the corrections in the proof. 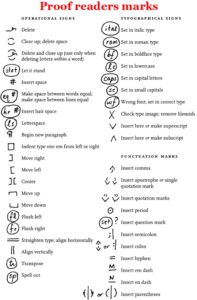 9. Parchment: This refers to a variety of paper. There are two varieties of Parchment papers in use. One is used in the printing industry for printing special  print material such as  Awards, Certificates, Business cards, Menus in the restaurants’, Poetry books, and several such rare and unique material. The print design on them may be of calligraphy and ornate script fonts in nature to give antique look to the print material. The Parchment paper used for such work will be thick, tough and design embedded as most of them are hand made papers.

Another variety of silicone Parchment paper is also in use for packing baked products, cooking or food packaging as they withstand high temperatures, and are grease and moisture resistant. The said quality Parchment paper is coated with a nonstick material, typically silicone, to give them nonstick properties.

Earlier parchment papers used in 15th century were made out of the skin of certain animals like calf, goat, or sheep. Subsequently instead of animal skin, plant based parchment papers came into being. The plant made Parchment Paper is made from fir trees or plants such as cotton or flax or alpha cellulose, known as water leaf, which contains no sizing or filling materials. The pulp is treated with sulfuric acid converting a part of the cellulose into a gelatin-like colloidal. When the sulfuric acid is washed off, the colloidal film hardens on the paper. The strength of the paper thus gets increased and will not disintegrate even when fully wet.

The finer variety of Parchment paper is called Vellum. Vellum is Latin word meaning made from calf, and a thin skin material thus  prepared was used for writing or printing single pages, scrolls, or rare manuscripts books, Bible etc in medieval period. Since the Parchment paper made with animal skins were not weatherproof, the books printed on with parchment pages were bound with strong wooden boards as cover and kept firmly clamped by metal caps to keep the pages remain flat and to ensure that they do not get distorted due to changes in the humidity. Now similar paper is manufactured treating the cellulose fibers with sulfuric acid to make them weather proof. Because the paper is thicker and has a non uniform textured surface, printing will have  to be done with care to achieve good results.

Unlike Orthochromatic films which are sensitive to all colours except Red, the Panchromatic Film is sensitive to all colors including Red.  In the case of Graphic arts panchromatic films, one can find the recorded images represented in greys and blacks instead of  in color where as in the Photographic Panchromatic films, the recorded images will show actual colors after developing.   In  Graphic arts Panchromatic films, the densities of gray can range from dense black to lightest greys as they depend upon the brightness of the the  color in the original and the color sensitivity of the film used. Several Photographic film makers like Agfa, Gevaert, Fuji, Ilford, Kodak, DuPont, Fomapan and some more firms  produce the films in sheet form and as Glass plate films for use in Graphic arts industry. 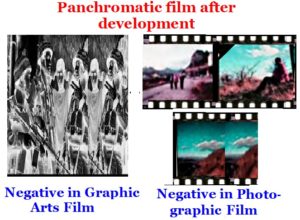 11. Paste Drier: The inks dry generally by three major processes such as Oxidation, Polymerization and Penetration. There are two types of driers available for adding with the ink to facilitate drying of the inks on the printed stocks. They are Liquid drier and Paste drier. Amongst  the two, a compound in the form of a paste which is added with the inks to accelerate the drying process is called Paste Drier. The Paste drier contains some metallic portions such as Cobalt, Manganese, or Lead  along with some liquid form of resin or oil. The Paste drier act as catalyst to increase the speed of drying along with Oxidation and Polymerization process. If excessive Paste drier is added, that may cause some of the printing problems. Therefore care may have to be taken to add suitable proportion of the driers in consultation with the ink maker.

12. Perfect Bind or perfect binding: A technique of binding the books with some strong adhesive like glue, Fevicol etc and to fix the outer cover on them.  The edges of the books will not be stitched or threaded, instead they will be tightly held and glued or some strong adhesives applied on their back  in such a manner that the glue or the adhesive intrude slightly into the book edges and hold them firmly without allowing the loose leaves to fall. Perfect binding is  solely adhesive based binding.

How is it done? The printed books or pages will be first well jogged to keep the back edge straight and in level. The well jogged books or pages will be clamped on the clamping machine and edges applied with glue or some adhesive and allowed to dry. Thereafter, they are taken out, and cover material pasted on the book covering the back of the book as well. Finally the book will be trimmed on all the other three sides to complete the process. Paperback novels are one example of perfect binding. Other books that are bound in this manner includes Booklets, telephone directories, Periodicals and some Magazines that are several inches thick. This binding is also called Lay Flat Binding because the books can be opened fully up to the back edge.  This kind of binding  can be quickly and easily done and the binding is durable too. 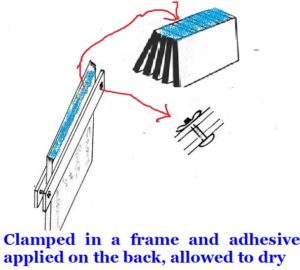 ………..Additions to alphabet P to be continued under P/3