1. Quality : It is a subjective term relating to expectations of the customer on the print job given by him. The level of expectation may vary between the Customer and the Printer, but when some one says ‘I need Quality job’, he expects the finished job to be on par with internationally accepted standards in terms of print quality, appearance and neatly executed job. However there is no measurement to weigh the quality aspect except by comparing one job with another job provided they are of the same variety.

2. Quarto: Any sheet when folded twice, i.e lengthwise once, again another fold lengthwise in the folded Sheet will show ¼ of the original size. The said ¼ th size is called the Quarto. Supposing the sheet is folded twice in irregular manner as shown in the illustration, can each piece be called Quarto?  No, unless  all the four pieces have equal length and width, and are either rectangle or square in shape,  they are not to be called Quarto.

Again another question. If the sheet is folded twice dimensionally and cut, will each triangled sheet be called Quarto? No they will also be not called Quarto but they can be called Quarto tringled paper in non technical way which again is not a standard name. 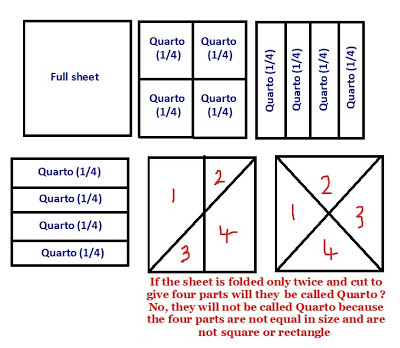 3. Quotation: There are several meanings for the term Quotation in Printing. The first is the space filling metal material used for locking up the hand composed matter in a metal frame for letterpress printing. They are also called quads or Quadlets or quadrats. Quads are extra wide spaces in the form of thin metal whose height will be less than the type fonts. The thicknesses of the quads will be expressed in terms of multiples of 1 Em space, 2 Em, 3 Em and 4 Em space. Occasionally 5 Em space is also used. The word Em is one of the unit level measurement in hand composing. 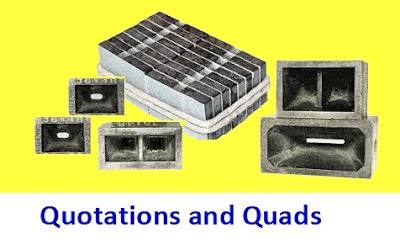 The second meaning for the term Quotation is the rates expressed for executing a specific job. The quotation will include cost of all items like paper, materials etc which may be used in the work, labor charges, service charges etc. Some of the charges may be hidden charges.

The third meaning for quotation in printing is suffixed with the word ‘marks’, thus reading quotation marks. Quotation marks always come in pairs. The general rule is that one should remember to open a quotation and close it at the end of the quoted material. The Quotation marks are written as a pair of opening and closing marks (given in Red color) in a sentence as shown below. 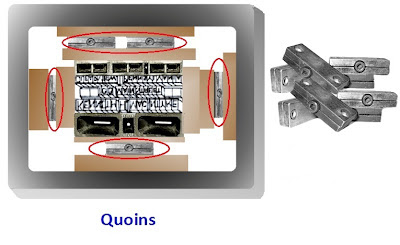 5. Quire — This is a term generally used in the Stationery shops to indicate the quantity of sheets. Students bound writing Note books are also sold in terms of One Quire, two, three and four Quire note books. One Quire measure unit is equal to 25 sheets. Even loose sheets are sold in multiples of 25 sheets called Quires. However quantities beyond 100 in numbers are mentioned like 100 sheets, 150 sheets, half ream (250), one ream (500) and so on.
6. Quick-set Inks: This variety of Ink is one of the most important inks used in printing that prevents Set Off and rapidly dries in delivery pile. Quickset inks are used mainly for printing Coated and Enamel paper stocks, and used on high speed presses. The Quickset inks generally dry by Absorption cum Oxidation cum Polymerization process as they contain balanced Oil, Solvent and Carrier vehicle ratio. Quickset Intaglio inks is another new development in the Printing industry as they are extensively used by the Bank Note and Currency printing Presses where the speed of the machine will  require rapid drying on delivery pile,  retain their relief on printed sheets, and do not cause set off problem. As modern development Infra Red light  devices are also used to speeden up the drying process by the time the sheets are delivered on the delivery pile.

7. Quality control : In any industry, the Quality Control aspect plays a vital role. In major Printing Presses the Quality Control is essential to execute the work to the fullest satisfaction of the Customer. Quality Control doesn’t start and end on printing machine alone. It needs to be practiced right from the stage of  procurement of material to the finishing end activities for the product. In order to maintain  quality control,  certain standard trade practices are followed  in each and every processing zone. For example the quality of the negatives made, quality of the plates made, the process and specific chemicals or materials    used in those areas, the type of paper and ink procured, paper conditioning, cooling period for the printed stocks, the manner in which they are handled and so on are closely monitored by the Quality Control department by random checking.  Random sampling checks to assess the quality of the material used is also done.

8. Quarter tone: This again relates to the formation of the halftone dot pattern. The dot formation between the highlights and Middle tones are generally referred to as Quarter Tone which will be 25% of the size of  dots as seen in the darkest area.  The darkest areas in an image is  called Shadows. The lightest areas are called the Highlights. The rest of the areas in between them are generally called Middle tones.
However when the Middle tone is also broadly split into two areas to express the tonal values i.e between the middle tone and the High light areas, the areas which have dots showing almost 25% value compared to the dots in shadow areas or the mid value of dots in between the dots in High light and the darkest Middle tone areas are called Quarter tone dots. This is a guide to the process operators who can accordingly improve the imaging by giving four groups of dots to increase the clarity of the image. To understand this see the model illustration. 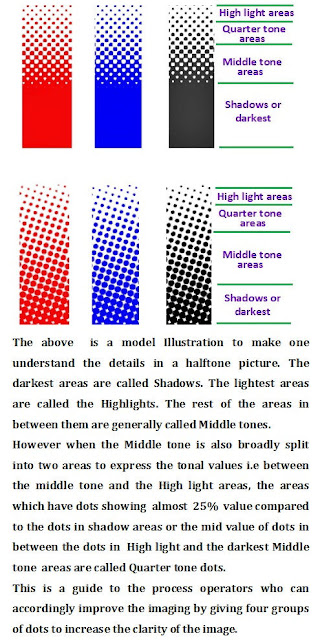 ………..Additions to alphabet Q to be continued under Q/2