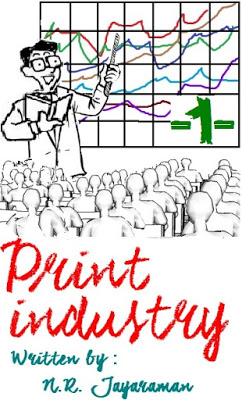 [This four part article on ‘Print Industry’ analyzes how the growth of several industries like Pharmaceutical, Label printing, Food products, Consumer products, Book publications, Periodicals, News Paper and Packaging industries inter se help the growth of Printing Industry in India. Some of the information contained in these articles are based on data derived from several other sources and wherever they have been used, due acknowledgement has also been given. This article has been published with the intent to provide few inputs to the research students community in Printing for compilation of thesis or any such material needed for pursuing higher studies — N.R. Jayaraman]
Print industry in India is poised for a big leap in the next few years, and its growth depends not only on the development of machineries and equipments, but also on the printed material produced. The invention of several sophisticated printing machines has helped the print industry to increase the production and transform the pattern of information distribution. Equipping presses with sophisticated machineries and equipments alone will not be suffice, but their effective use coupled with methodologies deployed too are needed for the the optimum utilization of those machineries and equipments for the productivity in shortest time.

Actually the saga of the growth of the print industry in India emerged only after the arrival of the missionaries from Europe. The establishment of presses and growth of printing began from the then called state of Bengal in India when several British offices under the alien rule were initially established there and they needed their own machineries to print official documents and other such material most of which were mostly black and white format. This slowly spread to other areas where their offices were established. Though the first modern press reportedly entered in Goa which was under Portuguese occupation in India in the year 1556, the credit for the printing of the first book in India certainly goes to a German born Christian missionary named Ziegenbalg who perhaps printed a full book in the year 1716 in Thanjavur district of South India, so say the researchers in printing. If one stretch back their childhood memory, they would remember during the periods 1950-1960, thousands and thousands of printed leaflets, pamphlets and booklets carrying the contents of Bible in several titles, filled with attractive illustrations, printed in smaller presses were distributed free of cost in India by the missionaries in various languages propagating Christianity. Thus the dawn of mass communication through print format as practiced by the Britishers and missionaries in India began to spread during conversion of people to Christianity beginning from several parts of South India and the Eastern regions. 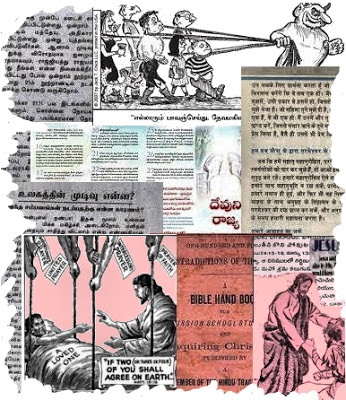 From late 1800, the art of publishing books began to spread and rapidly expanded over next few decades. Compared to many other countries more no of recognized and private printing institutions to impart print education from simple certificate course in printing to B. Tech. Printing technology and M.Tech printing technology began to emerge in India, spread over in several states. Since Printing is part of the mass communication process in which technical skills holds the prime importance, well over 50 recognized institutions impart education and training on printing. It is estimated that on an average 4000 to 5000 students come out of these institutions per annum and enter into the print industry comprising of  small, medium to big- spread over in several states. The effective role of the trained personnel is utmost importance for the growth of any industry and thus the same is rightly performed by the educational institutions in printing.

The printing industry has undergone revolutionary changes and began to bloom forward from the year 1900 when several reforms were introduced by the govt of India. Globally Indian Printing Industry ranks amongst the top ten countries with USA leading top of the table. One of the reports states that the print industry in India grew by nearly 73 % till the year 2011 if one compared the growth from the period 2006. It will be interesting to read one of the documents titled ”Review of The Press in India (2008–2012): Report submitted to  ‘The Press Council of India’ by the Department of Communication and Journalism, University of Pune,  compiled for the period 2008-2012″ that explains that the effects of slump in global economy in the year 2009 were also felt in Indian news paper industry which contributes substantially to the growth of print industry. It further stated that the growth of the News Paper industry remained flat in 2009, but in the next year when things settled down, the News Paper industry rose by 11.7 % contributing its share to the print industry by 89.3 %. Amazing!  As per the same document the overall size of the print industry which was valued as  178.7 billion Indian rupees in 2009 registered a growth of 11.7 percent equivalent to the value of  161.5 billion Indian rupees in the year 2010. The same document cited a report from E & M (Entertainment and Media) sector projecting a growth of 9.2 % per annum for the print industry ending up to the period 2016. Indeed very interesting forecast on the growth of print industry. We have to wait for reports for the period 2016 to know whether the forecast has come true. Newer technologies in printing emerged from several countries during last two decades with the intent to enhance the production with quality and speed in delivery, the concept which was well utilized by Indian printers. This approach laid perfect road map for the growth of the print industry in India.

There are several factors responsible for the growth of the print industry, one being the higher rate of literacy which actually induces interest in the reading habit. The sudden spurt of several printed Publications, Periodicals and News Papers in various languages besides E publishing during last one decade can be attributed to this aspect- higher rate of literacy.

Over the years, the Printing Industry has rapidly grown in all parts of Globe and so was in India. With allied industries like Printing Machinery Manufacturing, Packaging industries, Paper manufacturing, Ink manufacturing and manufacturing of raw materials and consumables for printing growing steadily, India has emerged second in the growth of this industry in the world market.

The Printing Industry in India, one of the biggest and fastest growing sectors is estimated to have 225,000 to 250,000 printing presses of small, medium and large sizes if the registration of the presses are taken into consideration. However according to conservative estimates these figures could be anywhere near 200,000 only since it is quite possible that many in-house printing presses included in the list of 225,000 to 250,000 presses may not have been registered with the Registrar of Shops and Establishments act and operating as non registered print houses or cottage industry to avoid taxation and other formalities. Some of the registered print houses may also be existing only on paper for the sake of deriving revenue or other benefits from the govt like advertisements and license for the importation of newsprint paper etc. They thus cannot be taken into consideration  for fair assessment for the growth of the print industry. It is also true that in India about 75% of the printing presses are family owned.

The assessment of one forum called ‘The Federation of Asia Print Exhibitions, China (http://www.asia-print.org/Item/124.aspx)’ while commenting on the growth of the print industry in India states that:-

Quote:-
…………The Indian Printing Industry revenue growth rate has consistently outpaced national GDP growth. As per one of the Economic Survey reports, the Print Industry’s growth rate was between 12 to 13% per annum in the year 2011. It is generally projected in all surveys that the overall growth in Printing Industry since 1990 has been to the extent of 12 to 14% per annum including allied industries. As per one of the Economic survey reports, the current annual turnover in Printing Industry has been to the tune of 50,000 crores in Indian rupees. As per another report available, the Capital Investment in this industry is over 83,000 Million rupees and a third report mentions the figure as 80,000 Million rupees (ITPO). The collective growth of Indian printing and packaging industries has a compound growth rate of over 13% ……… 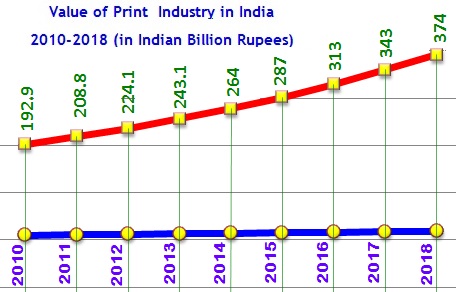 ‘The Print Industries Market Information and Research Organization (PRIMIR)’, Virginia, USA is a premier market research association of the graphic communications industry. According to their assessment, the Print market growth in India which slowed down during global financial crisis will again grow up at the rate of 6.8 % from the year 2017. They have also projected the growth of two sectors Packaging and Publishing to grow by 7.8 % during the same period.

Let us now  see how the growth of some of the industries or sectors substantially contribute to the growth of the print industry.

An analysis on Printing and circulation of Paper Money – 3 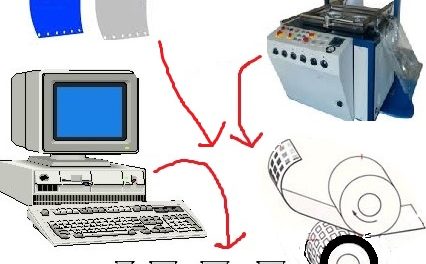 An analysis on Printing and circulation of Paper Money – 6