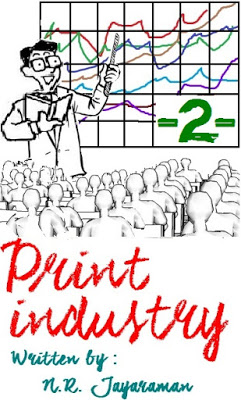 [This is the second of the four part article on ‘Print Industry’ which analyzes how the growth of several industries like Pharmaceutical, Label printing, Food products, Consumer products, Book publications, Periodicals, News Paper and Packaging industries inter se help the growth of Printing Industry in India  — N.R. Jayaraman]
News papers and other Periodicals
The ever increasing reading habit in general can be attributed to higher rate of literacy. It has also come as a boon for the increased production of Newspapers and other Periodicals & Publications. One of the most important sectors, Newspapers and Periodicals publications, which is responsible for the growth of the print industry is published with the backbone of the well organised in house print houses. According to one survey, the readership of newspapers and magazines have gone up by 15% per annum. As on 31st March, 2015 a total of 105,443 newspapers and periodicals that include bi monthlies, tri monthlies and weekly magazines and periodicals were reportedly published in India. This figure is based on News papers and Periodicals actually registered with the Registrar of News papers of India. Even though the entire periodicals are not printed in house printing presses equipped with machineries and equipments of their own, still a majority of the News Paper and periodicals have most advanced print houses to publish their own publications while the other periodicals get their publications printed from thousands of quality printing houses in major metros in India on contract or rental basis.
Survey of top 10-12 National News papers and Periodicals published on national level revealed that the increase in the circulation was 8% on an average per annum from 2013 till 2014. This information is based on the data from the Audit Bureau of Circulation. Similarly the circulation of the local news papers have also gone up by 3.5 % during the same period. Remember that the Digital publications or their increase in readership have not been accounted for growth of print industry. Only the increase in the circulation of the printed News papers and Periodicals have been accounted as they aid the growth of print industry as every increase in the quantum of copies needs to be actually printed on some kind of printing machines.

The report published in ‘Economic Times’ news paper dated 31st May, 2016 states that :

Quote:-
…………….Circulation of print publications, which include newspapers and magazines, has been growing at a Compound Annual Growth Rate (CAGR)* of 5.04 % over the past eight years, according to the Audit Bureau of Circulations (ABC). The agency attributed the growth to launch of new titles and expansion of existing ones.

…………..The print medium grew and expanded in India despite stiff competition from other media such as television, radio and digital media.
-: Unquote

* The Compound Annual Growth Rate shortly called CAGR is a useful measure of growth over multiple time periods. It can be thought of as the growth rate that gets you from the initial investment value to the ending investment value if you assume that the investment has been compounding over the time period.

A total number of 22,787 publications furnished their circulation figures online for the year 2014-15 to Audit Bureau of Circulation claiming total circulation of 51,05,21,445 copies. During the period 2013-14 the claim of circulation was 45,05,86,212 copies per publishing day. When we compare the circulation of these two periods, 13.30 per cent increase in circulation is seen during 2014-15 compared to the previous year.

As per the data available from nic.in, the circulation of registered publications from the year 2005-6 till 2013-14 showed gradual growth from 6% onward up to 13 % with an average of an average of 12.58 % indicating that the contribution of News Papers and Publications to the growth of the print industry could be around 12.58 %. 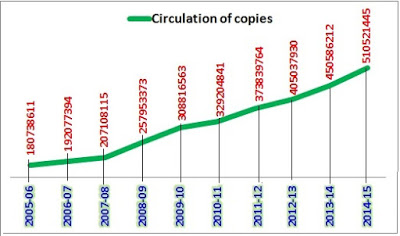 Thus though different opinions gave varying figure on the average growth of the News Papers and Publications, all their projections are fluctuating between minimum 5 % to maximum 12.58 %. We can therefore safely assume that the growth would not have been less than 8 % per annum on a conservative estimate. All the above information will reveal that the increased circulation of the News Papers and Periodicals increases the print demand which indeed supports print industry’s growth.

Newspaper industry is the only industry in the world which recorded highest growth in terms of copies circulated and this growth remained consistent even during global recession, irrespective of newspaper being published at local, national or even at global level. It is reported that during the period between 1941 – 2013 at gross national level, they have shown a growth of 18.78 % per annum.

Besides News papers and Periodicals, there is great demand for printed material for schools and colleges and other educational institutions. There is a growing demand from the readers for several general category of books on fiction and nonfiction too. There are en no of publishers who publish fiction and nonfiction books on several subjects and various titles. The higher production of all those publications contribute to the growth of print industry. If one has to assess the growth of the print industry on account of publication of educational books, it is necessary to briefly look into the growth of educational institutions and students enrolled in them.

One of the salient findings of ‘Seventh All India School Education Survey’ with reference date of 30th September 2002 as released by NCERT revealed that as on 2002 there were 1,030,996 recognized primary, upper primary, secondary and higher secondary schools operating in this country.

It pointed out that compared to the no of schools that existed in the year 1993 when ‘Sixth All India School Education Survey’ was conducted, a growth of 50.68 per cent was seen in the year 2002. (Data Courtesy: http://www.ncert.nic.in/programmes/education_survey/pdfs/Schools_Physical_Ancillary_Facilities.pdf) 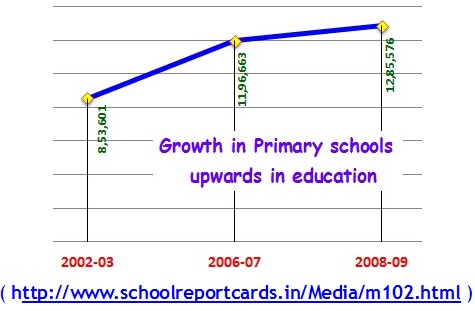 As per the statistics of the Ministry of Human Resources, the growth of educational institutions and enrollment of students for higher studies in Professional Colleges and Universities from the period 1950-51 to 2007-08 show an increase of nearly 38 % in a span of 58 years if we take the figure of 1950-51 as 100 % (base year for calculation) and 2007-08 as end period for comparison. 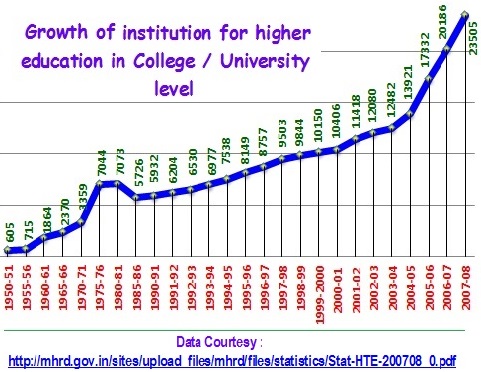 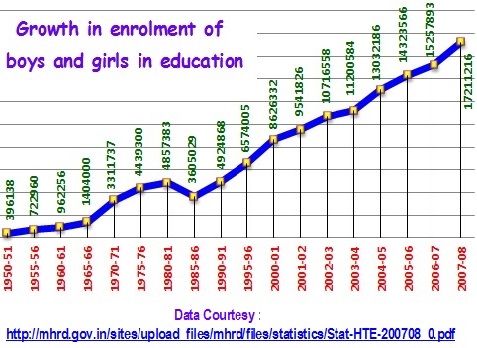 The following two charts have been prepared based on the inputs from the statistics on the higher education released by the Ministry of Human Resources development. The charts will show how the growth has taken place in the sphere of higher educational field.

When more institutions come up and enrollment in them continue to grow in all spheres of education from Primary education schools to Professional Colleges and Universities, naturally the need for the printed text books and study material including research papers and related summary books too will keep on increasing thereby substantially contributing to the growth of the print industry.

One of the survey reports – Perspectives on Publishing in India 2014- 2015 presented by the German Book Office showed the following breakup for the General book market. This supports the impression that the educational book printing dominates the General Book Market and is ever increasing as more educational institution come up and more no of students get enrolled. 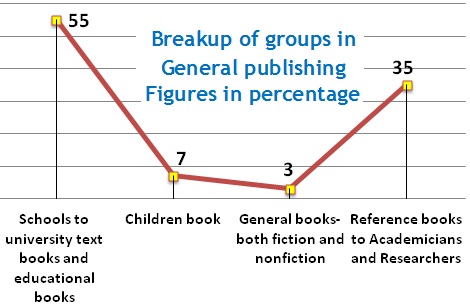 When we see the entire list of data mentioned in pre paras, it becomes clear that in the General group of publications other than News Paper and Periodicals, the educational books of all nature dominate the list in contributing higher share to the growth of the print market. India has about 16,000 publishers who publish several books in over 30 languages. Every year about 77,000 books are published in India. However the Federation of Indian Publishers claims that there are approx. 19,000 publishing houses in India and are publishing approximately 90,000 titles as printed books. The higher figure augers well for the growth of the print industry.
As per a report published in the Business standard dated 10th January, 2016, the compounded book market growth was 20.4 per cent between 2011–12 and 2014–15. The report further stated thus:

Therefore if we consider the entire scenario we would realise that besides News Papers and BI, Tri weekly and monthly Periodicals, the printed Educational books and fiction and nonfiction books of many varieties and nature substantially contribute to the growth of print industry.