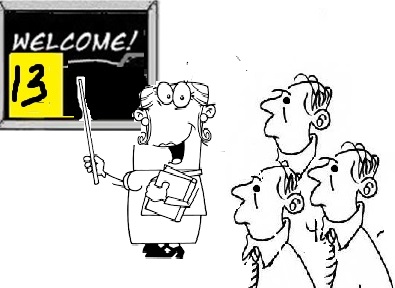 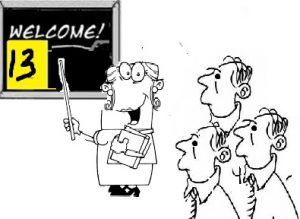 There was a query from a student on certain issues. His question and answer is reproduced below for the benefit of other students——Author

73) Which one of these is responsible for the ON and OFF Process of the cells – the RIP or the IMAGESETTER (PLATESETTER).

An image setter is a high resolution output device called printer which transfers electronic text and graphics on to film or plates or any other photo sensitive medium for further reproduction. The image setter uses  laser and a  Raster Image Processor ( RIP ) compatible to create the film,  postscript. The postscript is industry standard programming language that describes the appearance of a printed page for printing and imaging as developed by Adobe.  So the RIP is internal part of Image setter.

When the images are prepared for display or reproduction, it has to be first converted into bitmap image* which is called rasterization which is done by Raster Image Process.  In raster image process, the bunch of commands received in the computers are converted into pixels of different greys and black tonal values if the image is in black and white or if coloured image then the pixels will be in different tonal values representing the color values of the portion of image and then only the said pixeled image is printed. *In short the basic function of RIPs is to convert the vector graphics data^^ into bitmapped graphics with pixels. The ^^vendor graphics data is nothing but digital image formed through sequence of commands.

See below the bitmapped image consisting of pixels, and approximate tonal value or brightness of each pixel in the table called matrix. This is not actual representation, but only a representative illustration to explain the terms and the process. Each horizontal line is called scan line and the image is scanned by line by line in horizontal motion. 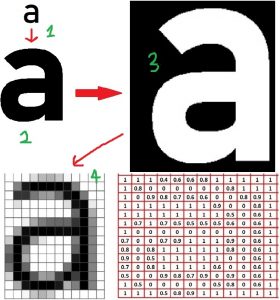 The brightest areas in the image are the white portion and represented by the larger value (1.0) as shown. The darkest portion is blacker as represented by zero value (0.0). The middle tones are represented by higher or lower values corresponding to their brightness or blackness.

In above illustration you can see that alphabet ‘a’ when reproduced on image setter or computer will show the pixels in the above manner.  The illustrations under serials 2,3 and 4 are alphabet’s enlarged appearance which show rugged edges in the form of grey areas.

This will explain that the RIP is second functionary in On and Off process of cells as it only converts the primary commands into pixel images.

74) We provide a 300 dpi file for a 150 LPI Screen, I understand that there will be 2 Pixels allotted for each dot, if those two pixels are two different levels of grey, which one does the RIP select for its dot?

First be aware that pixel is always in square or rectangle in shape and therefore each dot cannot be represented by only two pixels. If you see the illustration below you will understand that each round dot will be represented in one or four pixels unless they are different other (elliptical or straight lines) in shape. If the dots are very small and accomodatable in single pixel, it can also happen, but certainly two pixels itself cannot form a round shaped dot.

Secondly a single darker dot cannot comprise of two different levels of greys as the edges of the dots will be in invisible grayish tone as may be seen in the  enlarged illustration with the lowercase word ‘a’.

Since RIP which is raster image process, converts the bunch of commands received in the computers into pixels of different greys, it picks up entire commands in one go that contains all levels of grey to form pixels of different values to complete the image. Therefore, which level of grey will be first picked up by RIP for formation of dot does not arise. 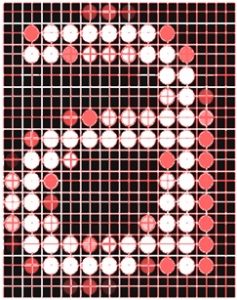 75) Third One – Am I correct If I say that all the halftones dot are not exactly round shape (considering we have selected circle shape dots for ripping) as it is based on ON and OFF process of the halftone cells and does not end in round shape as in the case of 30 % and 20 % as in the image.

If you are using commercial halftone screens in reproduction process for printing by Offset, Letterpress printing machines, then the images will indeed be in round shaped dots of varying sizes. Each rounded dot has a center point.  The variation in size of dots and their appearance (shape) depends on the shade of grey used.  If some special variety screens such as elliptical dot screens are used, then the image may be formed in those shapes.

In case the reproduction is from computers or image setters, the images are printed with dots of varying sizes, closely placing them next to each other in grid pattern. As dots make up the components of a grid, all rounded dots are formed from a distinct pattern of squared dots. The appearance of roundness depends on the resolution of one’s computer (Remember that though the dots will be visible as round in shape, when you enlarge the image you will see them formed only with square pixels of different sizes)

Thus in On and Off process of halftone cells, the round dots sit at some distance away from each other appear round in shape but when they   join together in chains representing the tonal values of the darker areas, they appear in different shape and appearance, though the chained ones are connected by only round dots even if they are 20 or 30 % reproduction. See the illustrations below –as reproduced by different screens- to understand how the round and square dots appear differently from grey to darker areas. 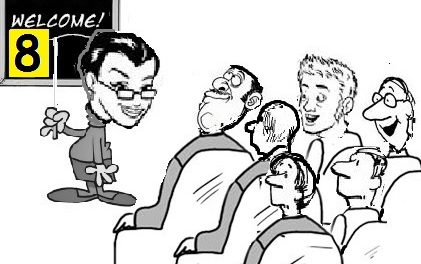 Guide to printing students – 8 a 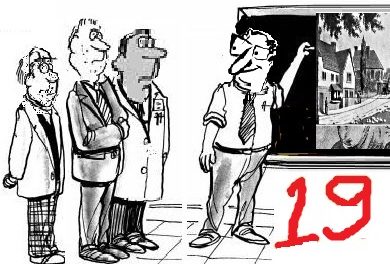 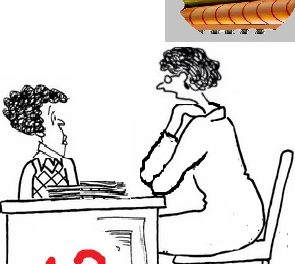