17. Linter pulp : This refers to ready made Cotton pulp sheets and pulp cakes prepared from trimmings and other processed waste paper  for making hand made paper and other good quality paper.  The Linter pulp is the mixture of short or rejected cotton fibers from the paper mills or from the go-downs, white paper trimmings and other fibers. The mixture is crushed to pulp and processed with some chemicals to clean them. The mixture is then made in cake form or thick sheets so that they can be readily added in some proportions with the good pulp in the paper mills while  processing good paper.

The litter pulp made paper will be smooth and durable, but will cause  fluff problem on Offset machines during printing as the undissolved specks in the re-pulp linter cakes will embed into the surface of the paper and get  released with sticky inks under pressure on the printing machines. Printed paper will not be used in the preparation of the  linter pulp  material as they can not be effectively bleached to give whiteness while manufacturing white printing paper. However even the trimmings of printed paper are used if they are  meant for making hand made paper. Adding some proportion of linter pulp cakes with the good pulp in the paper making process reduces the overall cost of paper making. Hence this is used by some manufacturers.

18. Ledger Paper : This paper is also called record keeping paper or Ledger paper is and will be in light greenish colourand smooth enough to take ink pen writings and prints. They were primarily meant for making registers for keeping business records. They are also meant to print important documents such as stamp paper, wills, deeds etc . Besides, they are also used as registry and legal papers for recording the proceedings as used in the registrar office, history sheets and account books. The Ledger paper is made in slightly greenish shade to give special identity to the paper. The ledger papers were initially made in standard size of 17” x 22” to facilitate making Ledgers, and other documentary papers which were also standardized in sizes.

20. Logo/ logotype : The term identifies a specific symbol for specific cause or firm or an activity, which can not be used by others or for other purposes. The origin of Logos came from the use of special character fonts used in hand composing such as © ® TM ✩ and certain standard images used in the printed marriage invitations as supplied by the foundries along with the metal fonts. Each image supplied by the foundries as logo fonts were meant to convey certain message or cause. Therefore based on the said analogy some design elements came to be created by the firms to exclusively project them or their activities. 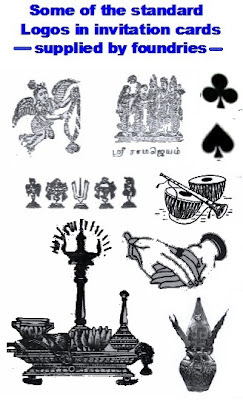 20. Laser printing: Laser printing is an electrostatic printing process and in the family of Xerox process. The images are formed over a selenium coated cylinder with laser beams which produce high definition text and graphics. The electrostatically charged drum accepts the electrically charged powdered toner called ink on to the charged areas representing the text and images.  As the drum with the toner rotates it contacts the paper when the static with toner image on the drum gets released on to the paper surface. Immediately due to combination of the heat and pressure the image (toner) on the surface of the paper gets fused and cause the print to appear. This is the principle of Laser printing.

The laser printer is different from an inkjet printer in a number of ways. The toner or ink in a laser printer is dry. In an inkjet, it is wet. Printing by deploying a laser beam to produce an image on a drum by electro photographic method to print a full page at a time.

Laser printers can easily produce images with resolutions from 1000 to 2500 dpi (dots per inch) and can produce higher quality prints. The speed will be much higher and  even multi colors jobs can be printed by Laser printers. The main disadvantage of the Laser printer is that it needs a Computer to transfer the images. If the paper is slightly damp it will not properly transfer the images and the printer can cause paper jam. 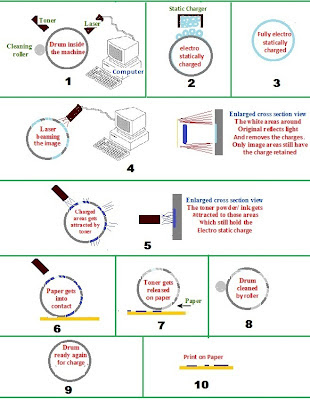 21. Lino type : The Lino type machine composing is the oldest composing process where in the machine is attached to hot melting mould from where the molten metal will flow and fill up the line of matrices containing engraved fonts or letters. Thus a solid line of metal type is cast instead of  individually hand composed material meant for printing by letter press process. Since lines of letters are cast for composing the texts as against the instead of individual letters, it has derived the name Lino Type or Lino cast type. It was known as line casting machine. When the Letterpress printing process was much in demand during earlier era of printing,  the News paper and magazine printing establishments extensively used the Lino type casting machine for composing the matter instead of hand composing which was time consuming process. The Lino type and another machine composing system called Mono type composing machines were subsequently replaced by Photo composing machines . The machine was operated with 90 Character key board to compose the matter. 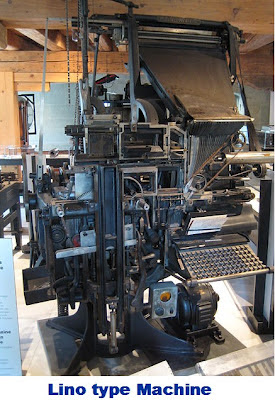 To read more on Lino type click the link below
http://en.wikipedia.org/wiki/Linotype_machine
…………Additions to alphabet L to be continued under L/3