10.Letterpress : The process where in the prints are taken from relief surface of blocks or plates. This is one of the oldest processes in the four basic processes of printing. The plates used for printing by Letterpress process will have the image areas in relief. The manually composed type fonts are also assembled in the desired format and printed by letterpress process. Letterpress printing can be done by manually operated treadle machines, semi automatic platen presses as well as on fully automatic machines. Letterpress plates do not require dampening system like Offset printing. Only the raised image areas of the plates will receive the ink in the image areas as the non image areas will be depressed. The images are printed using zinc or aluminum blocks on which the images may have been prepared either by photo mechanical process or by engraving. Letterpress printing is the oldest and most common form of printing, based on which   Flexographic printing and Dry Offset printing were developed. Letterpress printing find favor with job work such as Visiting Cards, Letterheads, greeting cards, invitations, mail forms, circulars and other small sized and small quantity jobs while huge volume of work is also done by automatic machines including multi colour work. Especially this process suits more for printing on coated stocks. 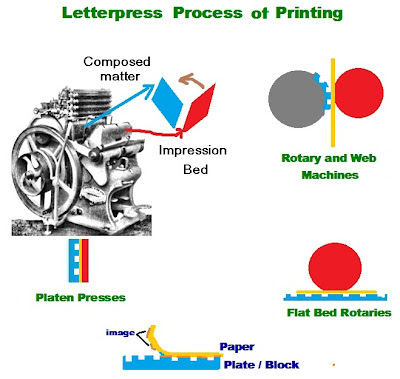 11. Lithography : In the earlier days the Offset printing was known as Lithography because instead of metal plates,  special natural lime polished stone was used as printing plates.  This process of printing is based on the ink and water repellent theory.

While using the stone as plate for printing, the images used to be drawn, text written by hand with certain semi fluid oil based inks or composed matters transferred on to the stone surface by transfer paper process. The transfer papers used to be coated with some gelatin like substance, processed, and then the prints from the composed matters taken on them, from which the images were transferred on to the stone. Lithography is best described as a planographic process of printing. This process set the basic concept for development of Wet Offset Printing using metal plates replacing stone. The process involves the following:
(i) Inking to be done manually
(ii) Dampening should be done manually
(iii) The paper is placed on the stone containing the image and impression given 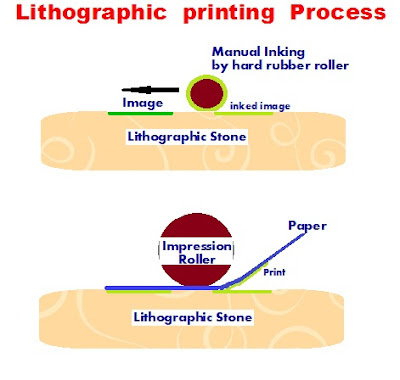 12. Light Integrator: An electronic component or device that detects and controls the changes the light intensity by integrating the reflected light and the aperture in a process camera during exposure of a film negative or positive thus assisting the shutter operating unction. This device is very essential in the process cameras in the presses where high quality multi colour work separations are carried out since the intensity of the light defers with aging of lamps which causes UV output changes and also when the lamps warm up the UV output changes. Therefore to compensate such changes the exposure time and the aperture openings need adjustment and this device becomes very useful.
13. L*a*b value: This is an important test conducted on paper to find its suitability. Is one of the important parameters for testing the suitability of the Bank note papers meant for currency note printing . This test is carried out by s special apparatus called spectra densitometer with internationally approved standard illumination device. The batch to batch variations in the shades are detected by conducting this test. Similarly this test is also carried out to test the inks. This is an important tool in Color management.  The L*a*b* color space, a device-independent color space has become the de facto standard by which the various devices and processes used in graphic arts communicate with each other in terms of color information.
14. Luminescence : The light  or brightness of an image visible to the naked eyes  differs with each person. Luminescence is a photographic measure of the intensity of the light traveling in a given direction. It describes the amount of light that passes through or emitted from a particular area. This is an important factor that guides the designers while selecting appropriate colour combination for printing, especially when the text matter is to be printed on wide areas. The most important aspect of color choice in graphics is luminance contrast which is the physical variable that controls the visual brightness difference between the lightness of the text material with the background. 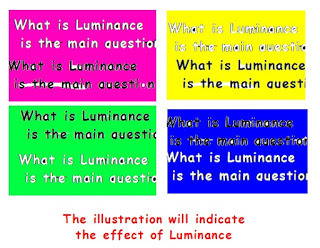 15. Leading edge: Edge of a sheet of paper that is held by the impression cylinder grippers. In short the leading edge of the paper means the gripper edge of the paper.
16. Legend: The Engineering Drawings and Maps are comprised of symbols and lines that represent certain components or areas. Although a majority of the symbols and lines are self-explanatory or standard still a few symbols and marks indicated must be explained for each drawing. Therefore Legends are printed to ensure that a person can correctly understand a drawing which has several areas marked with  Legend or key symbols to interpret the said portion.
It is like a dictionary and explain what the Legend mark in a specified area represents.  For example a miniature blue circle on a drawing, represents the location of a camping site. A legend on a drawing thus provide clear information on the symbols printed at various places in the drawing. For example in a map the park locations, lakes, and rivers, etc are represented by certain short symbols as every such info can not be printed  which if done will become clumsy and confuse the reader. 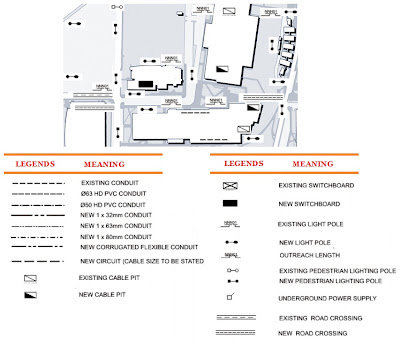 …………Additions to alphabet L to be continued under L/3