1. Overrun: – Production of print copies more than the ordered quantity is called Over run. This may occur due to inadvertent error in judgment of the printer expecting reprint order, or over printed by mistake due to technical fault on the machine. The printing of additional  printed materials occurs due to one specific reason. When the books are printed, say for example order for 10,000 copies of 100 pages each, the printer can not exactly print 10,000 prints alone to get all good sheets, is always customary for the printers to print something like 5 to 10 % extra copies as spoilage which can occur in subsequent printing. Sometimes it may so happen that at the end of printing and binding, due to lesser amount of spoilage than the anticipated spoilage, the quantity of finished product may go up by 3-4 % . Such excess product will be termed overruns and the excess quantity may be offered by the printer at some concessional rates than the actual rate that is charged. Similarly due to unavoidable reasons when the spoilage had worked out to be more and the supply had to be restricted by 2-3% then it will be called as under run. Therefore in the printing industry where such work is regularly undertaken, the contract provides for the excess or short supplies by 3-5%.
While the above over run factor is in commercial side, another meaning of overrun in technical side is that the type setting that had exceeded the estimated no of pages due to the picture blocks occupying more space than estimated pages  and the typed matter had to be rearranged from one column to the other to accommodate the print matter. This is also called Over run.
2. Offset Printing : The technique of printing process in which  the image gets transferred  from a plate to a blanket which finally transfer it on to the paper instead of directly printing the image from the  plate to paper, is called Offset printing. This is one of the three main processes in Printing. The Offset printing again has two divisions  which are called Wet Offset and Dry Offset printing. In Wet Offset printing the printing plates have the images and text matter in plain surface. They are neither in relief form, nor etched inside the plates and are in the same surface level of the plates.
In Dry Offset printing the plates  for printing has the image and the text in relief format similar to Letterpress printing, with one basic difference. The image will be in readable form unlike in letterpress which has te matter in reverse format. However the print image gets transferred from the plate to the blanket which in turn transfer it on to the paper surface.

Several models of Offset machines are available to print A4 size papers (Like Swift, Multilith, Romayor and Rota print machines)   to   bigger size sheets and even reels of paper. Of late the Dry Offset Printing remains the main medium of printing for printing Currencies as the working is found to be more easier than   wet Offset printing. 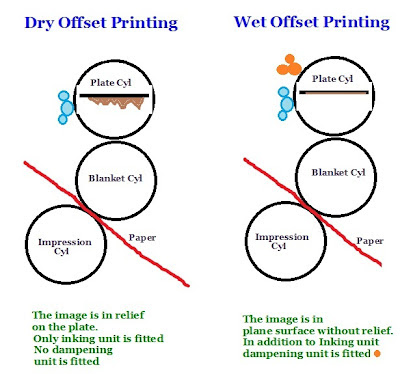 3. Opacity : The degree to which light is not allowed to travel through a substance is called the opacity of the substance. Opacity in simple term is a measure of a material’s ability to obstruct the passage of light. This term applies to the paper and partly to the film  in the printing industry. If the opacity of the paper is more it will cause show through i.e showing the front side printed matter onto the back side of the sheet of paper. Therefore opacity of the paper is important in printing and determined by the factors such as amount  of  fibers, degree of bleaching of the fibers, and the kind of coating etc.  The thickness of the paper also influence the opacity. Note however that the thickness of  paper alone is not sufficient to increase the opacity, some times even the thinner paper will have more opacity than the thicker paper because of the fiber and filler contents.
Opacity is determined by a ratio of reflectance measurements which is the measure (percent) of the amount of light passing through a sheet of paper. Several instruments and equipment  is available in the market to test the opacity. The general principle is that the paper with a black object kept at the back is  illuminated from the top side  at a particular angle and the amount of the reflected light is measured. Similarly the same paper with a white background is measured without altering any of the setting. The difference between the two is  the opacity of the paper.
In respect of films used in the process work, the opacity is indirectly termed as density. Read more under density. 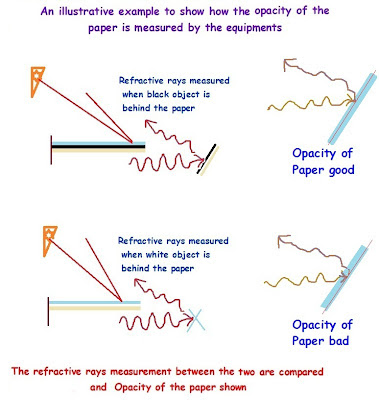 4. Opaque: The term Opaque has wider meaning in printing. An object which is not transparent or translucent is called opaque object. In printing this term refers to process films and inks. Opaque is certainly not a color, but indicates the light passing ability of the material.

When a negative is made ready to make plates or blocks for printing, due to some extraneous factors some of the non printing areas may show transparent spots in the film which if allowed to remain will pass the light during plate making process resulting in black spots to appear in the non image areas during printing. In order to stop those spots from appearing in the non image areas of the plate causing unwanted images, the spots are blackened out on the negatives with a special retouching medium called opaque ink which will be in dark reddish colour. The opaque ink will stop the light passing through its surface. This is called Opaquing process. However if the entire non image areas in the negative is not fully black and somewhat translucent due to improper exposing or developing the opaquing process can not be done and fresh negative has to be made.

Similarly printing inks too have the quality of opaqueness as their property. The printing inks are broadly categorized as opaque inks and transparent or translucent inks. The process inks used in three or four colour inks are translucent as they sit on top of one another to create secondary and tertiary colours in the print to resemble the original colored image. If the colors used in the process inks are of opaque colors then they will block the previous ink color on which the subsequent inks have been printed thus producing one single color image  instead of multi color image. At the same time opaque inks are also used in printing for some work. For example all the metallic inks are opaque inks that gives particular shiny shade are used for certain jobs. The ink used in the screen printing process are all  opaque color inks. 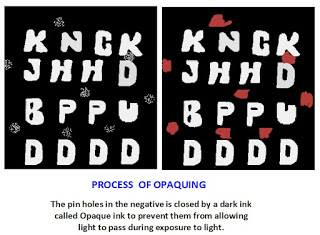 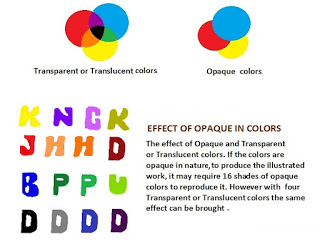 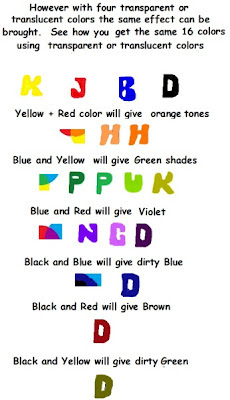 5. Overlay: This refers to the packing given over the bed of the printing machines to rectify the weak image appearing during the impression. Such overlay is done during make ready process. The Type height of font is 0.918” height and due to constant use they may have worn out and cause slightly weaker print when composed with other type fonts. Therefore wherever such defective print is seen, to rectify the defect  two types of actions are taken. One is underlay and the other overlay.  Small paper strips  pasted at the back of the composed matter to bring them to correct height or placing some kind of packing material below the form to bring it to normal height in Letterpress printing. But the same defect can be rectified by overlay process by pasting small strips of paper over the impression bed in the platen machines or the impression cylinder covered with the packing material that contacts the typed matter or blocks locked in the frames.

Note that individual type fonts (letters) can not be underlayed and only a portion of them can be adjusted. However by overlay process even such small adjustment is possible. Similarly the areas in the blocks which show weaker print is also rectified by overlaying in the weak areas  by pasting different thicknesses of paper on the impression bed. Since such an under laying or overlaying process is not possible in the Offset printing process (whether Dry Offset or Wet Offset) i.e to place strips  of packing either at the back of the printing plate or on the impression bed, to rectify such problems  the packing is given under the blankets to adjust the weak image which  that is called under packing- a modified version of  to underlay or overlay. 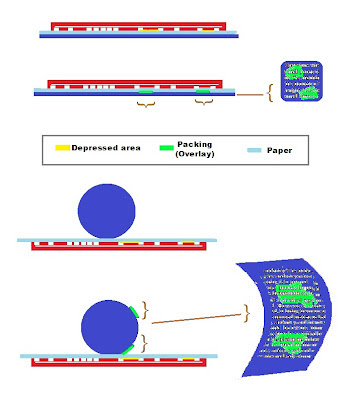 ………..Additions to alphabet O to be continued under O/2