Justification: The text will look better when justified. The alignment of text to the right  and  left margins is called justification. Setting the body of text in such a manner that the composed matter will be equal in width in every line. Every line of the text matter though will begin from the extreme left in the print area of the page will also  end in the extreme right side of the print area to give an appearance that each line begins and ends at the same point to give box like appearance of the composed matter.
Text is said to be left (right) justified if each line begins (ends) at the left (right) margin. Text can be aligned to both the right and left margins, but it is necessary to insert extra space between words, and rarely between characters when the text matter is composed by hand composing.

Job Printing: Term referring to lower volume print work or short-run print received at intervals, for example for individuals or small firms. Such work include business cards, letterheads, flyers, advertisement, pamphlets, sympathy cards or birthday cards.
Jacket : A bindery term indicating the loose cover put on the hard bound books. They will not be bound with the book, but will act as dust proof cover material. The Jackets will invariably be printed material containing the names of the book and sometimes some images pertains to the book. The jackets will always be a thick cover material such as plastic laminated or varnish coated one. 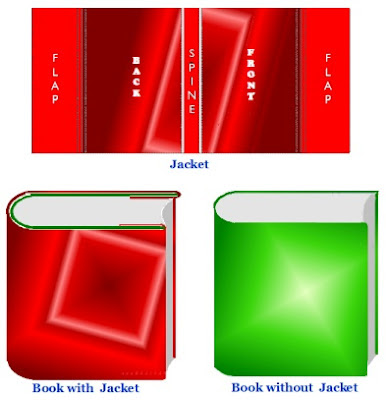 JPEG or JPG – Abbreviation for Joint Photographic Experts Group. This is a digitized or image file  format developed by the said group for storing and sending picture files via internet. It also does not work very well for non-photographic images such as illustrations, cartoons, flat color areas, or images with defined edges.

Jet printing : Jet printing is another name for Inkjet printing which is the most commonly used in a tabletop model or other printers. Broadly speaking there are two types of jet printing methods in use. The thermal inkjet printer works by using tiny, electrically heated cartridges of ink. When the ink is heated, a tiny bubble rises to the surface and propels a tiny drops of ink onto printable media such as paper.

Developed in the 20th century, the Inkjet printing  process recreates a digital image by propelling droplets of ink onto paper, plastic, or other substrates. Many varieties of Ink jet printers are available which can reproduce both Black and white as well as multi colour prints on paper.

Since the Prints emerge from the printer slightly wet they may need time to dry, hence the paper gets delivered slowly in delivery end to allow time for the ink to  dry.  Printing is slower and therefore inkjets aren’t designed for high volume printing. 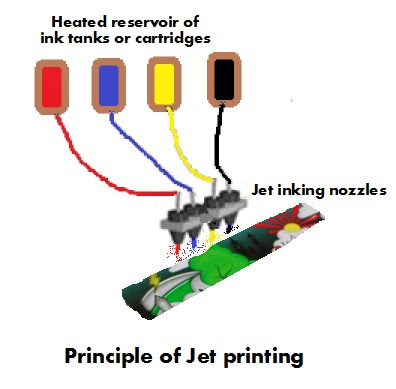 …………Additions to alphabet J to be continued under J/3