17. Set off :While printing on  smooth paper or coated stock of paper, it may so happen that the ink from the previously printed sheet may transfer some amount of ink from its front surface on to the back of the  printed sheet which fall over it in the delivery pile. Such an undesirable ink transfer is called the Set Off. This happens due to the wet ink which failed to dry quickly. Therefore suitable ink to match the paper stock is to be selected. In the high speed machines between each printed sheets some unprinted sheet of low quality will be inserted to prevent the good paper getting spoiled. In letterpress machines Anti Set Off spray used to be sprayed with the anti set off powder on the surface of the image which will prevent ink transfer to the next sheet. 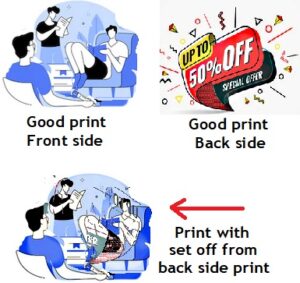 18. Stretch ink: This is a very special quality of ink supplied by specialist ink manufacturers to print on the substrates and surfaces which will stretch or shrink after printing. In such an event the printed image will show cracks on itself when the substance or the medium on which the ink is printed. Therefore to tackle this problem the Stretch ink is used on such material which are liable to get stretch during use. Such special inks are called Stretch Inks and they possess elastic tendency to stretch with the material on which they are printed. Example of such inks are those inks used on stretchable Fabrics. 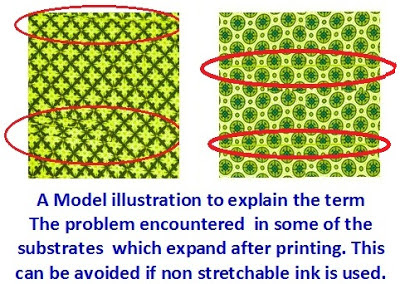 19. Shrink wrap: Packing the material in tight pack with the use of plastic or PVC or Polythene film is called Shrink Wrap. The material to be packed is wrapped around by the plastic film and pushed into the heat chamber. Due to heat the plastic film slightly melts and shrinks into a bundle. The heat chamber is so designed that it does not burn the film, at the same time ensure that the film gets shrunk tightly and adheres with its own surface. The shrink wrapping is done by automatic machines which automatically wraps the material with a layer of thin plastic film and shrink wrap it. This clear shrink wrap is used for packaging of many products including bundling of Currency notes.

………..Additions to alphabet S to be continued under S/5