21. Scanner:- Various types of Scanners are in use in printing. The scanner is a device that captures the images and converts them into digital image and stores them in the memory of a computer, which is further processed for printing.
The other type of Scanner in use is the one which color separates and produces printable negative or positive or even a metal block meant for printing. Essentially the Scanner is a device that scans an image, capture them and store it in its memory. From memory, the required format- negative, positive or plates –  is derived based on the system that is attached with it for a particular function.
A Scanner can be used to make direct negatives or positives or to capture the image to make modification, improvement and colour correction etc before using it for printing.
The latest development in the print industry is the online print inspection machine where the scanner plays vital role. The the actual images under print will be  scanned to capture the correct print image  and store them in memory console fitted on the machine as golden image which compares the printed images online with the stored image and indicate the defective areas or defects to immediately to take necessary corrective action to rectify the defect while the machine is running. 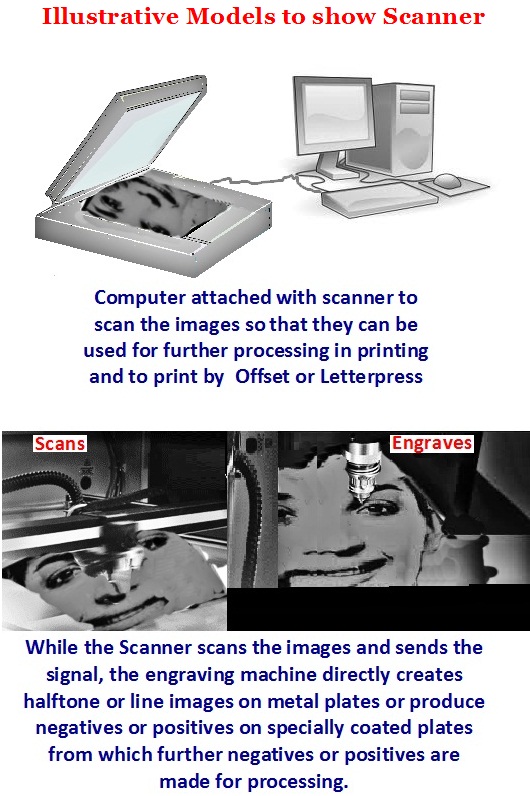 22. Sizing : This term is very important in the  paper making process and refers to the chemical which is used  to smoothen the surface of he paper. This material  fills up the inter woven fiber gaps called porosity. This will also prevent the paper from absorbing too much moisture. Sizing also protects the fibers from breakdown due to oxidation and add strength to the fibers . Sized papers show a considerably higher strength.

23. Stripping: Stripping means assembling elements of composed texts and  material to make them in one format or one page before processing for printing. Stripping is also called a film assembly or an image assembly. How is the stripping work carried out?

The process of Stripping for a single page print material or a book is the same. In general first a dummy (Model)  will be made indicating the text matter and position of the illustrations. Thereafter a master layout to actual final print job  is made on a sheet of Astralon sheet flat film (or any other highly dimensionally stable film base) which will act as a guide to position the negatives containing the text material and the illustrations and joined together with cello tapes and further processed.

Supposing it is the case of a  book work for Offset printing.  The  entire manuscript will be composed and the  running text matter will be split to fit each page   based on the pre-prepared layout and pasted showing register marks and page nos etc.  Those individual pages will processed further to get negatives. Those negatives will then be joined together  keeping them in correct position based on the master layout (astralon transparent sheet showing layout position of each page and register marks) for processing further to make plates for printing. This process of assembling the text matter  as well as processed negatives is called stripping process.

In the case of photo composing machines where you get the direct negatives, the space for pasting the illustrations will also be given and composing of the text continued. Each laid out sheet will indicate the place where the illustration will appear. The next step is to make negatives from the originals supplied.

25. Streaking: This is one of the printing defects that is commonly witnessed in Offset printing. The streaking will show a dark streak of  image in rows at a particular point of run. This defect could be due to several reasons such as improper Cylinder bearer adjustment, worn out gear, worn out bearings on rollers or cylinders or may also be due to ink drying. If the inking form roller is not properly set with plate cylinder it can also give a bounce and cause this problem. 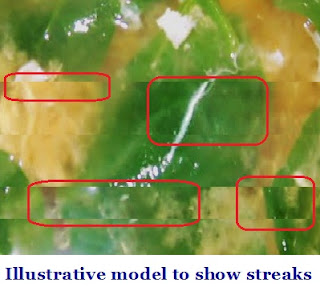 ………..Additions to alphabet S to be continued under S/6