8. Under color Removal : Technically called UCR this process involves removing the primary colors like Yellow, Cyan and Magenta from some areas of the images – Middle tone and Shadow areas- where the black color will be required to enhance the density and also in the areas where pure black will be required to be printed. Therefore the three listed color negatives having some images in the areas where Black will get prominence will be partially or totally removed.

The entire process of under color removal can be done only by the color separation masking process and can not be manually carried out. Since the Yellow, Cyan and Magenta always print below the black in the darker areas, this process of removing the Yellow, Cyan and Magenta is called under Color Removal. However this process is restricted to only special cases where pure black printing in certain areas is required. 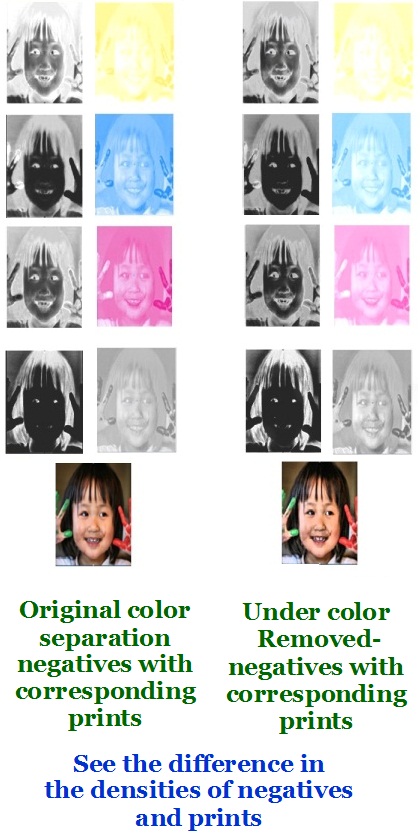 9. Under Color Addition: This process called UCA in technical term is another process- a reverse of the under color removal process- to increase the color strength of darker areas and shadows by adding colored inks in four or more color printing. In the Under Color Addition process small amount of Yellow, Cyan and Magenta is added in the darker areas of the image in addition to printing black to enhance the image since the conventional printing of Yellow, Cyan and Magenta combination alone can not give desired darker density. The entire process of under Color Addition can also be done only by the color separation masking process and  in some cases manually by increasing the ink flow on the plate if the addition required is for over all denser print.

10. Unit system: When the typographic process of type setting commenced in the  Gutenberg era, each country practiced their own standard measurements in hand composing which could not be universally carried out. Particularly the length and height of the type faces etc caused problem in combining various type fonts and faces for printing. In order to alleviate such problem and to find an acceptable  standardized  measurement  for  type faces some efforts were taken in the eighteenth century when the Point system emerged. Accordingly the  point system is the standard used today.

One point equals to 1/72 inch or .35 millimeters. Twelve points is equal to one pica, the unit which is commonly used to measure column widths. Point size is the height of the font from its lowest descender to its highest ascender plus a small buffer to prevent descender of one line of type from colliding with ascenders in the next line ( the letters extended portions such as serifs does not touch the serif of the next letter) . Typography can also be measured in inches, millimeters, or pixels. 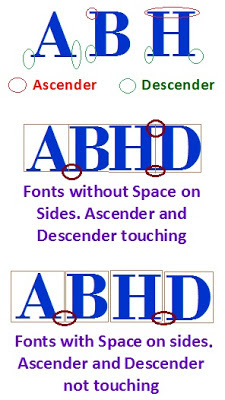 A letter also has a horizontal measure, called its set width. The set width is the body of the letter plus a sliver of space that protects it from other letters. The width of a letter is intrinsic to the proportions and visual impression of the typeface. In typography work all the basic measurements are stated in a universally accepted measurement called Point system. The thicknesses are stated as ens, ems, points, pica etc. Irrespective of the type faces, the heights of the types will be uniform which is 0.918’’. 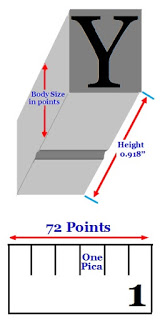 11. Unbleached paper: Paper which has not undergone the bleaching process with chemicals such as Chlorine etc during pulping process is called Unbleached Paper. The pulp consists mostly of wooden pulp. However due to environmental restrictions, chlorine-free paper is manufactured both as bleached and unbleached with oxygen, ozone and/or hydrogen peroxide. If the paper is not bleached it will be in dark color. The unbleached paper are in dull brown in color like Kraft, Ribbed, Brown papers used for packing and even the Card board box thick papers are all unbleached.

12. Universal Copyright Convention (UCC) : In order to protect the rights of the originator of an invention, an agreement was reached in the year 1952 in Geneva under Universal Copyright Convention (UCC). This stipulates stringent rules to protect the inventor from being denied the right of claim over the product which he had invented, and to protect his right over any or all the unique work of any nature if had been created by him.

However the inventor can sell the right to any one for some financial  considerations or otherwise at his will. Every Government has established Intellectual property rights and Trade Mark registration Offices in their country which entertains such claims and publishes the work to grant exclusivity rights after completing several formalities as accepted by the international convention. Once the right is given to a person, it means legal stamping has been accorded to the inventor for his invention.

13. Unsharp Masking : Normally the multi color printing is done with plates made from multi color separated negatives or positives. Basically Yellow, Cyan, Magenta and Black printing is done to get the images match to the original. Sometimes special colors are also printed with additional set of plates made from additional color corrected negatives or positives. Let us therefore confine this subject to basic three and four color printing in order to understand the process of unsharp masking. In order to sharpen the edges of the images printed, or to compensate the hue errors (when the shade of the inks do not reflect the correct shade in the printed image)  the color separated negatives are further processed in combination with another low contrast mask film (a negative or a positive) to get the suitable negative or positive to prepare plates for printing. Such a mask – low contrast negative or positive- for hue correction or edge sharpening- is called Unsharp Mask.

What is  the meaning of  low contrast mask in color separation work? It is nothing but a film positive or negative containing faint image of the same original that is being processed.

To what extent the low contrast film will be made  will depend upon the expertise of the Process camera operator and the masking film suppliers recommendation. It is suffice if one understand the basic technique and process. Even in the digital process, with suitable image editing software, the same quality of edge sharpening of the images as carried out through the unsharp masking is possible to make.

14. Unicode: Unicode is a computer font that has been mapped to contain a wide range of characters, letters, digits, symbols etc of universal standard character type face from many languages and scripts from around the world. It is universally accepted font which every computer is able to decode and translate into readable format without need to download any font. There are several thousand fonts and text letters developed by the type foundries and the artists. To name a few among them being Ariel, Calibri, Badoni, Comic sans, Bookman, Gothic etc, etc.

These scripts are usable on the computers. However when the text material composed with these scripts are circulated amongst others, or uploaded in the internet, only those who have downloaded the said fonts can read them and not others.  More over many  such fonts and scripts are not available for free download and have to be paid for.  Okay, one can download and read if it is in a single language. The same problem exist in almost every language scripts(fonts).  Therefore when the question arose whether it is possible to read the contents without downloading any font  the Unicode emerged as a solution.

The Unicode standard covers more than 100 scripts and 110,000 characters. The latest version is Unicode 6.2. If anyone typeset any matter in Unicode in any language , any one can read it in their computer without downloading any font.

With Unicode transliteration software one can even comfortably typeset the matter in any language provided they know the spoken version of the same language. 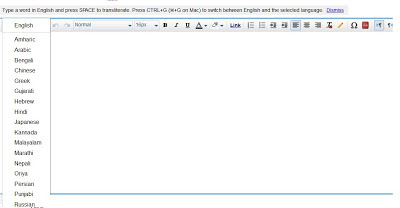 One example of such comfort is the folloing:
In Hindi ‘maeraa’ means mine. ‘Thum’ means you. If the spoken version word is typed in English in the same way it is pronounced  you get the Unicode in Hindi version .

Type ‘Maeraa’ in English, you get the Hindi version ‘मेरा’ meaning ‘mine’

Similarly Malayalam. When you write ‘ningal’ in English you get Malayalam version ‘നിങ്ങള്‍’ meaning ‘you’.

Same for translating in Tamil. You type ‘neengal’ in English, you get ‘நீங்கள்’ meaning ‘you’ in Tamil language.

This is the beauty of Unicode system.

15. Uncial : Unical is a Calligraphic style of letters, both Caps, small caps and lower case letters along with symbols. There are several styles of Unical letters available. They are hand drawn, or composed through typography or photo lettering means. This term Unical came from the Latin word ‘uncus’ meaning twisted, bent or crooked. The Unical was used only as block letters called Majuscule (Big letters) in the 8th and 9th Centuries in Greek, Latin and Gothic and later full alphabets designed with caps, small caps lower case letters etc  were released. 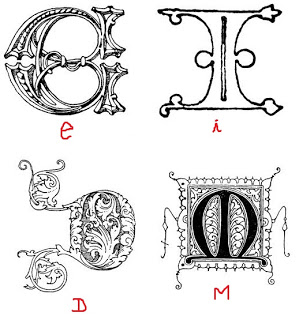 16. Uncoated: A paper manufactured without having any surface coating on it like an art paper. The Coating material is China Clay, Casein, PVA  etc. The uncoated paper will have more absorbency since the fibers are not covered with any material. The uncoated paper is used in many applications in printing including printing of books, low cost magazines, letterheads, stationery etc.

17. Ups: In printing, the term refers to many no of same image printed on a sheet in one pass. Supposing a job of printing 10000 labels of 3’’ x 4’’ size is received, it will be uneconomical to the printer to print one sheet with only one label in 3’’ x 4’’ size. Instead multiple images of the same label in 3’’ x 4’’ size will printed on the same sheet which will later be cut to actual sizes thus shortening the total run.  Thus the total no of images placed on the sheet for printing is referred as no of Ups. Each image is an up.  A job may be printed as  4 up, 6 up, 10 ups 40 ups, 50 ups etc depending upon the size of the print required, the size of the machine used and no of copies required.

18. UV Coating: In order to hasten the drying process of the printed ink, anti set off spray, interleaving and quickset inks are used. One other process in this direction is the UV drying process. Some of the inks are specially formulated to dry quickly with ultraviolet light while the sheets are delivered in the delivery pile. The UV drying speeds up the drying of the printed matter when the sheets are required to be printed again on its back side or subsequent printing is required on the same sheet. The UV curing inks are formulated to dry by polymerization process which actually hardens the ink quickly to stay on the printed surface. However a note of caution, UV drying inks are pretty costlier and are used only on special print work involving cartons of high selling consumable material whose print order will be high and required quite often in short time.

………..Additions to alphabet U to be continued under U/3