Underlay: On the printing machines when the impression pressure is not uniform, some packing in the form of thin paper is placed below the Impression bed or below the blanket to raise the non uniform surface on par with the level of plane surface. The process of inserting such packing material is called the Under Lay.

Particularly when the typographically composed matter with blocks are combined and printed, it may so happen that at some places the blocks may not be in level with the type heights. In order to bring them to type heights, packing paper will be pasted behind the blocks as Underlay.
Though the underlay refers to localized packing in offset, sometimes  the overall packing is also given normally on the machine beds or blankets for the following reasons: 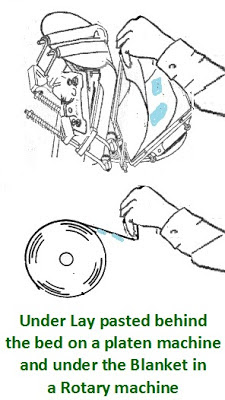 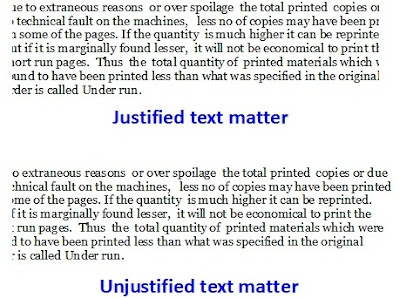 3. Underline: A thin line placed beneath every word is called the underline. This is also called Under Scoring. This is done to emphasize or give prominence to the word. When the underlining is done on multiple words that runs to few lines, the said process is referred to as solid underscoring process.

4. Under run: When the print order is received sometimes it may so happen that due to extraneous reasons or over spoilage or due to technical fault on the machines, less no of copies may have been printed on some of the pages against the total printed copies required. If the quantity is much higher it can be reprinted. But if it is marginally found lesser, it will not be economical to print the short run pages. Thus the total quantity of printed materials which were found to have been printed less than what was specified in the original order is called Under run.

5. Undercut: On an offset Rotary printing machines the Cylinders rest on bearers instead of on gears alone. The bearers can be seen as a metal ring like arrangement provided at both the ends of the Cylinders on which both the Cylinders revolve. However when both the cylinder bearer touches each other, some gap can be seen. The said gap is called Under Cut. The gap is due to the low circumference of the blanket cylinder compared to the bearer level of the same cylinder, which is provided to fix the blanket.

When the blanket covered blanket cylinder touch the impression cylinder on getting the impression, the image gets transferred on to the paper surface. There will however be no under cut on the impression cylinder as it is not covered with any material and will remain as a smooth surfaced metal body. However note that the Plate cylinder will have undercut for fixing the plates to bring it to the bearer height to transfer the image on to the blanket cylinder. The Undercut has been made to accommodate both the Plate and the Blanket and to provide room for packing below both to adjust the image quality.

6. Unleaded: Typographically when the matter is composed, no space will be provided between two lines by inserting a space called lead. Such a composed matter made ready for printing is called unleaded type matter. The lead consists of thin lead to thick lead of varying thicknesses to suit different jobs and they are called spacing material.

7. Upper case: In Typography all the capital letters of the type faces- are called Upper case letters and in the hand composing type case all the upper case letters will kept separately in the right side of the type case. The compositor, who is responsible for composing and arranging the letters to make it ready for printing would stand before the slopped two wooden cases which are divided into several boxes or sections to accommodate all the letter, both capital, small, capital and lower case letters and other symbols. Capital letters are stored in the Upper drawers and the regular letters in the lower drawers. 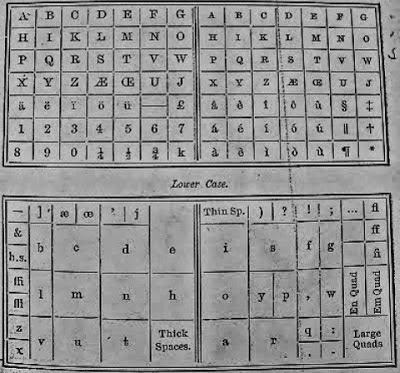 ………..Additions to alphabet U to be continued under U/1