How to cut down
Organizational cost
– A Case Study-
( Written by N.R. Jayaraman ) 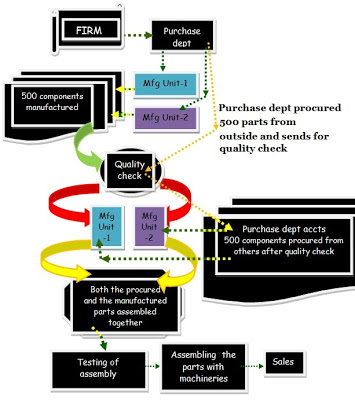 A study was undertaken for a unit which was manufacturing machineries and equipments using approximately 1000 parts/ components, some of which were procured by outsourcing them and the rest critical ones were manufactured internally. They were assembled together in different combinations to be used on the special machineries and equipments manufactured.
The parts were partially manufactured in two units and sent to the main units where they were assembled  with the outsourced parts and sent to the testing unit after which they were assembled on the main machine and sent for sale.
The outsourced parts were procured by the purchase department and sent to the quality check department. After they were checked, again they were received back by the  stores where they were accounted and issued to the user department as and when needed.  Each manufacturing unit had multiple sections where several sub parts or components were made or assembled. Each activities were almost interlinked and each component or the part was needed for some assembly or the other. This unit was set up several years back for manufacturing machineries and equipments but most of the finishing work were initially manually executed.
Over the years they modernized the plant with equipments and small machineries to augment the production of the parts thus resulting in over staffing in some of the areas, most of whom were engaged in the manual work. The excess staff had to be relocated or retired with suitable compensation as the firm decided to cut down the production cost to ensure that the sales did not drop due to ever increasing overhead as their competitors sold similar machineries at much lower rates.
The quality of the competitive machineries were poor and therefore even with marginally higher cost, this manufacturer’s machineries continued to be preferred by the users because of their quality and best performance which drastically cut down wastage in production time. However it was feared that at some stage they will not be able to effectively compete with other manufacturers unless the cost of the production is cut down.
Under the above background the unit desired study for restructuring the unit for better efficiency and redeployment of available man power to cut down the cost. Accordingly a study was undertaken and report submitted for restructuring the unit by adapting the following procedure:
…………continued