How to cut down Organizational cost – 2

How to cut down
Organizational cost – 2
– A Case Study-
( Written by N.R. Jayaraman )
See below an example to understand how the activities were analyzed since it was seen that a work may involve several steps or activities and can be completed in combination of other activities. The preparation of some of the PCB s for the machineries and equipments, each one of which consisted of 100 components or so needed the services of three personnel. 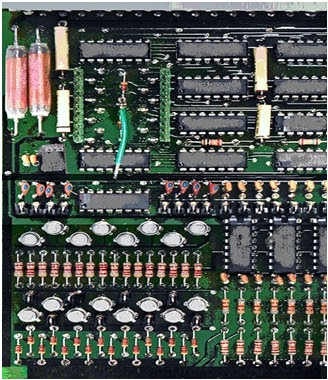 Every day the same set of PCB s were also not prepared. Out of several PCB s only when a particular PCB was needed it was fabricated. Each of the workers took three to few hours to complete the fittings allotted to them and recheck the fitting. For example ‘D’ activities ( to assemble ‘n’ no of PCB s) took five hours in a day as the person had to attach over 30 capacitors carefully. His job included the checking of the work of ‘S’ after ‘S’ fixed other parts. Similarly ‘S’ used to check the fittings of ‘Z’ after he fixed the parts. ‘Z’ too checked the complete fitting after ‘S’ and ‘D’ fitted them. So these three were responsible for not only doing their job, but also to counter check the job of others. Thus all the personnel in the three different activities had to check the parts of the others in their own group. That means checking and counter checking as the work was sensitive part in nature. It was quite a complicated work to carry on. One other important issue was the checking of the printed circuit board for connectivity before fitting the parts.

Therefore unless fittings of parts were completed the full board can not be checked and sent to the next department for processing. Certain days there may not be any PCB s to assemble and the personnel had to remain idle and they cannot be engaged in any other fruitful work as they were recruited only for this special purpose.
Such important aspects in several areas were considered along with the following factors.
Difficult to work
Avoidable repetitions
Monotony of work
Extent of responsibility required
Extent of supervision required
Working condition that existed
Extent of expertise and skill required to do the job
Volume of work involved
Minimum time required to complete the job Whether the existing worker has been remunerated in accordance with above.
It took several weeks to study the entire working pattern in depth and analyze the work pattern in relation to the product manufactured. After analyzing the data collected all the under-utilized man power, shortage of manpower and optimum personnel required to man the areas in the units were identified.
Besides the technical areas, all the under-utilized positions in the administration, purchase, stores, supervisory levels, less productive areas in production etc, etc were listed. Based on entire analysis it was decided to re adjust the staff pattern since the work flow was time tested in all areas of the Organization and one would have gained enough expertise to handle things.
To begin with, the strength of the administrative staff was downsized by computerizing many work areas in accordance with the essential operational concept. Certain procedures were suggested to be abolished. One of the better and tested mechanisms suggested was to partially enhance the pay of few personnel, give additional responsibilities, reduce workmen by eliminating certain intermediary steps which were not really adding value to the work, shift excess employees to other areas and train them to work since all the work were standardized.
See below one of the proposal to understand how one area was re organized. Both the Pre Revised and re deployed staff pattern are shown in two columns. 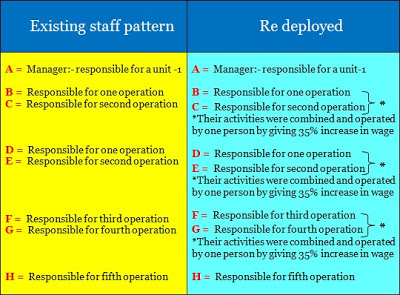 The three personnel thus saved were trained and shifted to other departments where shortage of man power was affecting work. Otherwise they should have employed afresh at least three more men in those places.
a) In the Pre Revised working the total wages paid worked out to 102,000 for three set of workers i.e. for six personnel (B,C,D,E,F and G) plus 43,000 for A and H personnel both totaling to 145,000. 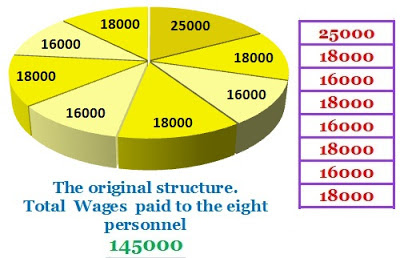 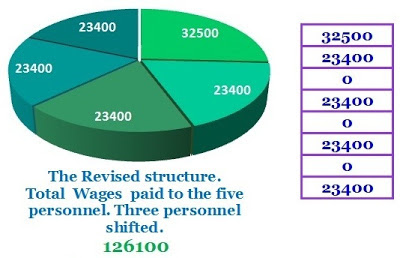 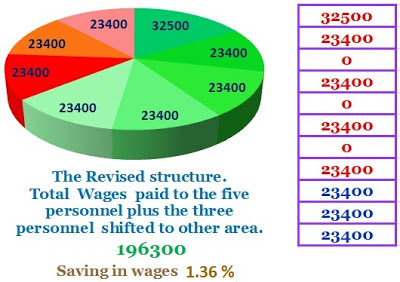 e) But in spite of increase in wages paid, and shortage of men compensated by posting personnel, there was a net saving of 1.36 % in one area alone. How ?
Had this not been done, they would have deployed minimum three more personnel in the departments where the shortage of man power was felt and which would have subsequently raised the wages level. i.e 145000 + 18000+ 18000 + 18000 = 199000 i.e for eight personnel in technical plus three in others departments.