How to cut down
Organizational cost -3
– A Case Study-
( Written by N.R. Jayaraman )

The following was another proposal given.

two shifts or increasing productivity
with more pay wherever possible

On one of the machines three men produced eight brackets in one shift . The lunch hour was half an hour in between both the halves of the shift. Due to the lunch break, the machine had to be stopped ten minutes before lunch and actual production commenced after 10 minutes after lunch because the machines had to be stopped and re started. The same is the case in the morning before commencing the work and machine had to stop before ten minutes at the closing of the shift. In view of the said action, the production also do not commence immediately and takes few more minutes. Thus around 45 to 50 minutes was actually lost in eight hour shift besides the lunch break.
Each worker was paid 200 per head and the wages per shift worked out to 3 x 200 = 600.
In the restructure scheme it was suggested to continue the work without stopping the machine during the lunch hour by giving staggering lunch for each worker. One of the three worker will go to lunch half an hour before actual lunch commenced, the second person will go in actual lunch break, and the third person will go at the end of the lunch. With the nonstop working of the machine during the lunch hour the production went up by three more brackets. Thus instead of eight brackets, eleven brackets could be manufactured. In order to encourage the workers to do the same, they were paid 1.5 hours extra wages per shift i.e. 20% increase in the per shift wage, for the staggering lunch even though they enjoyed 30 minutes lunch break individually.

Both the scenario resulted in the cost of the bracket  and subsequent profit margin as below: 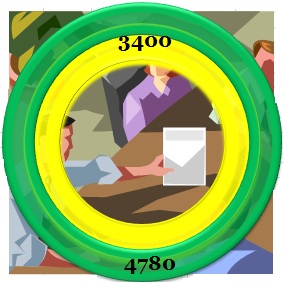 Margin of Profit per shift

If you see the graphic representation you can see that even  with increase in wages to the workmen, the cost of production per bracket has come down because the production has gone up per shift due to the staggering lunch hour working.  In the same manner the profit margin has also considerably increased. The yellow shades project the Normal working  data and the Green represents the Staggered lunch data.