Of late concern has been raised over the menace of forged bank notes and currencies all over the world. In order to strengthen the security one should not concentrate on the design aspect alone. Some different thinking is needed. Few ideas emerges in the direction of the numbering systems. They are shown below:

Over the years we have been numbering the documents only with a set of standard fonts and letters without realizing that some security can be added to them in addition to the style of font the specially prepared numerals can also have some designs which can not be copied by the counterfeiters. How could this be done ? With the special device (numbering box) it can be done.

We are using the conventional numbers so far which are of plain text as shown below.

Either the designed number panel can remain on the top or at the bottom in the manner suggested . The design element can also be country specific so that the cost of reproducing them will become very high to the counterfeiters as such Numbering boxes will not be available. More over it will remain an overt feature for the Public. Both the two Numbering boxes will have to be engraved with such Numerals. 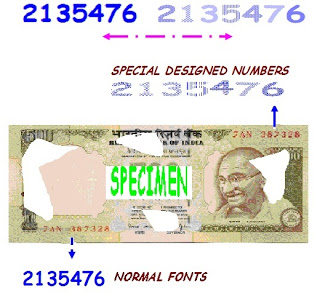 The numbers can be printed with specific shades as per the design element content in it. The numbers can also be printed alternately with colour changing ink which will alter the shade as shown above even with touch of finger which will have minimum body heat. The counterfeiters will not be able to produce such a numerical wheel which will be very costly. 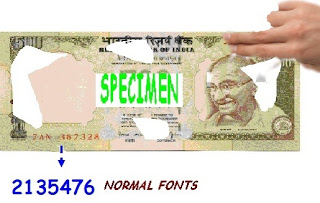 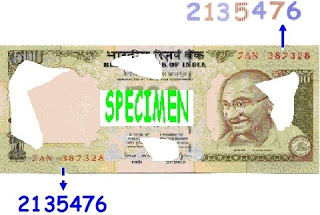 This is one of the advantage of the device patented as registration will be highly difficult for counterfeiters to register the numbers besides it is non photo copyable as the color copied print will not change the color of ink with body heat from  the finger .