Origin and growth of
Bank Notes and Currencies – 11 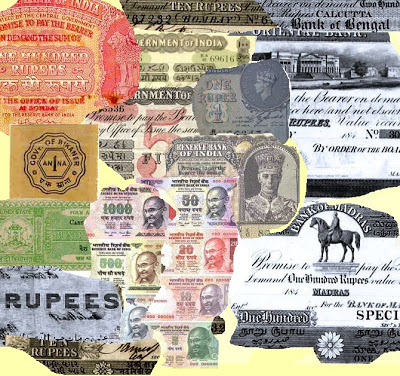 Acknowledgement: The information in respect of the Indian Currencies in Gulf Countries given below have been compiled with major and main inputs from the  article Gulf Rupees written by Mr. Peter Symes   (p j symes) who is expert author on world paper money. Researching various aspects of world paper money, Mr. Peter Symes has published the results and his findings in books and articles. Many of his articles have been published in the International Bank Note Society Journal.
I sincerely thank Mr. Peter Symes who has given me special permission to use the inputs from his articles and to reproduce them in this blogger for the benefit of the printers and students – N.R. Jayaraman
For many years the Indian rupee was the official currency in several areas that were controlled and governed  by the British  from India. Some such areas in which they issued  Indian Currencies were East Africa,  Southern Arabia and the Persian Gulf.
The Currencies that were in circulation in the Persian Gulf were received by the Gulf states from  Reserve Bank of India. There was no liability for RBI on account of this transaction since RBI held the sterling reserves against the Currencies  originally purchased  by the Gulf countries. However as the period passed, Indian Currencies were smuggled from India to the states of the Persian Gulf, where they were readily accepted as valid Currencies in exchange for gold, which was in turn was smuggled back ( gold) into India.
This smuggling of Gold led to peculiar situation as the smuggled Currencies which were taken  from India  were in excess of the Currency actually required  by Gulf states  for circulation within the Gulf states. The Currencies in circulation were found to be more than what was being procured  from RBI, India.  No country can afford to endlessly issue Paper Currencies without holding in reserve equivalent valued Gold or Silver or other precious material as  accepted internationally.  Usually it is accepted norm that a country held Gold or Silver reserve to the extent  against the value of the Currencies issued.

A  Banknote or Currency  is  generally considered  as a  type of negotiable instrument known as a promissory note and is issued by an authorised  bank of a country. The amount indicated in the same are  payable to the bearer on demand  as every Currency is incorporated  with  promising clause assuring to pay the specific sum indicated in each Currency.  For this purpose each Currency also  carry the signature of  the authorised  person  on the same Currencies. This is the general scenario.

The excess Currencies in circulation in the Gulf Countries  were therefore  a cause of concern to the Gulf authorities  and therefore  the excess Currencies were  sent back to India officially and exchanged back for pounds sterling. This illegal importation of the Gold and exchange of Currencies for pounds sterling   brought down the Reserve Bank held sterling held in reserve against the Gulf  Rupees.  Therefore the Indian government, in consultation with the governments in the Persian Gulf and the Bank of England, addressed the problem by introducing special Currencies Called ‘External Rupees or Gulf Rupees’ for circulation in the Persian Gulf by passing special ordinance in both the houses of the Parliament in India.

The special Currencies called ‘External rupees’ or ‘Gulf rupees’ were identical in design with the then existing series of Currencies issued to Gulf countries but were different in color. They were also incorporated with modified legend on the obverse, stating that  they are payable ‘at the office of Issue at Bombay’ instead of payable ‘at any office of issue’ as printed  in the Currencies used in India. The ‘External rupees’ or ‘Gulf rupees’  issued in the year 1959 were also declared not a  legal tender in India.  The serial numbers in all denominations  of the banknotes issued to the Gulf Countries were prefixed by  letter  ‘Z’. The Prefix letter ‘Z’ will also be not used  in any of the Currencies issued for  internal circulation in India.
When the ‘External Rupee’ were issued  the next act  was to withdraw the then existing old Currencies against the newer  ones  from the Gulf states. In order to replace the old Currencies with the new ‘External Rupee’ or Currencies in the Gulf Countries, RBI provided adequate exchange facilities for the exchange of  Currencies at all the banks functioning in the Gulf States and Muscat. The special Currencies issued did not cause additional liability to RBI as it was intended  to be ‘Exchange of Currency against  same Currency’ and the exchanged old Currency will be freezed from circulation.

In addition to the Gulf Currencies, from the year 1959, the Government of India also arranged for the special issue and distribution of the Currencies to ease the problem of Haj Pilgrims.  The Haj Currencies were issued to pilgrims proceeding on Haj Pilgrimage to Saudi Arabia. Earlier it has been the practice to permit Haj pilgrims to take the quota of currency allowed to them in the form of  Indian Currencies.  Since the Currencies were also forged and used for illegal transactions, the Haj printed Currencies with different Color scheme was introduced. The Haj imprinted Currencies were not legal tender in Saudi Arabia, but facilitated  Pilgrims to spend money for their travel purpose as they were valid exchangeable Currencies against local Currencies. The Indian Currencies with ‘Haj’ Imprint on them carried by the Pilgrims could be exchanged on par with local Currencies anywhere in Saudi Arabia which in turn were collected by the Banks and sent back  to India for conversion into foreign exchange. Therefore for Pilgrims from India, the foreign exchange Currency was Indian Rupee imprinted with Haj. Certain other features were also added in them. 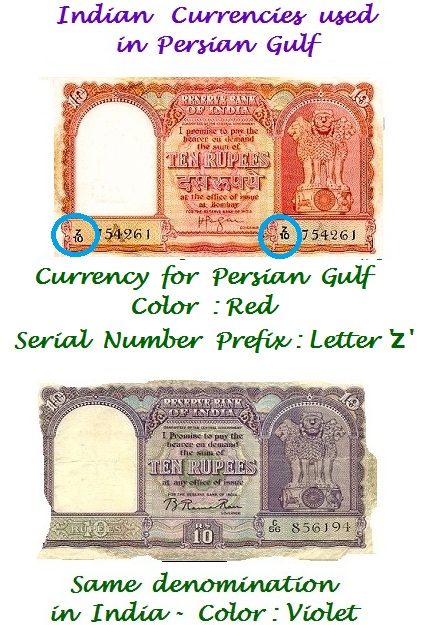 The Haj Currencies were different in colour compared to the Currencies issued to the Gulf Countries for their internal use and also the similar value Currencies used in India. The Currencies had the word ‘Haj’ printed on them. They are payable ‘at the office of Issue at Bombay’ and could be converted into Indian rupees or into pounds sterling under arrangements in place with the Saudi Arabian banks. 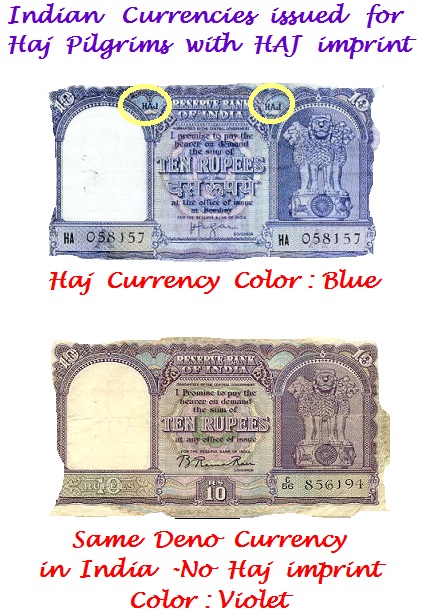 Rs 10/- deno ‘Haj’ Currency was printed in Blue color while the same Currency in India was Violet in color. The Currency issued for internal regular use in Gulf were Red in color.

Rs 100/- deno ‘Haj’ Currency was printed in Red color while the same Currency in India was  Purple in color. The Currency issued for internal regular use in Gulf were Green  in color.

On top of the Currency, the word ‘Haj’ was printed  at each   end of the sentence  ‘The Reserve Bank of India’
The Serial Numbers on all ‘Haj’ notes began with Prefix  ‘HA’.
The Kuwait Govt withdrew use of Indian Currency w.e.f. 1961 and Bahrain withdrew w.e.f. 1965.  Thereafter RBI withdrew the said facility extended to the Persian Gulf Countries. 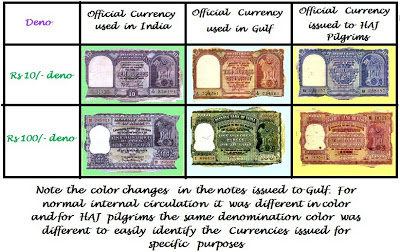 Origin and growth of Bank Notes and Currencies – 5

An analysis on Printing and circulation of Paper Money – 3