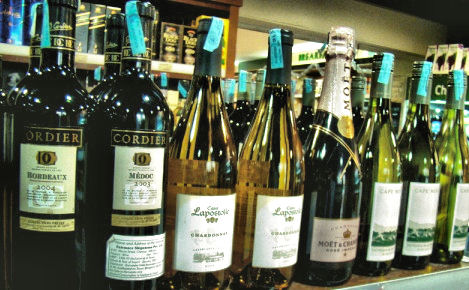 Part- 6
Written  by :  N.R. Jayaraman
In Tamilnadu seven varieties of Holographic Labels on polyester based films are issued. They have Unique codes printed both on the image as well as edge. The Labels too have machine readable feature. The production cost appears to be around 15 paisa per label.  The production/ consumption of Liquor bottle is shown below in the table. 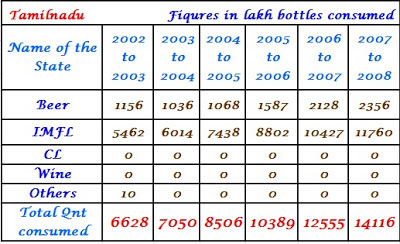 The requirement of Excise Label as per above in 2007-08 works out to 11.36 crores per month.   As per the Tender floated by Tasmac the quantity of  Polyester Hologram Excise Label required per month will be approximately 25 crore Labels of size 60 mm x 15 mm. The quantity can be increased or decreased or split up at the sole discretion of the Commissioner of Prohibition and Excise. The colors of the seven varieties of Excise Labels are:- 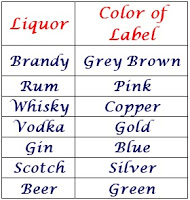 Though we tried to get some samples, the authorities were not willing to give us the same as it was security material and needs higher authorities approval.  Therefore an illustrative model of Excise duty Label has been shown as found on the Liquor bottle. 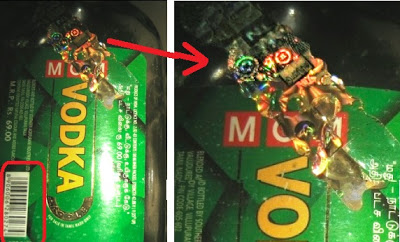 The per annum requirement of Excise duty Label has been worked out and shown in a graphical form below based on the consumption pattern of various types of Liquor.  The  requirement in 2007-08  is seen to be  over 11 crore Labels per month. 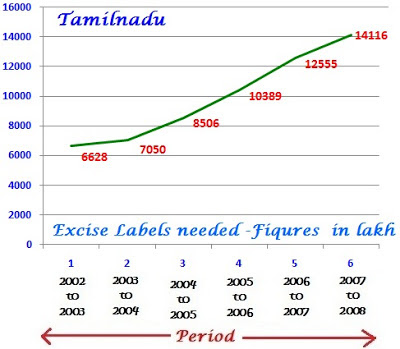 Since Country Liquor is banned no Excise stamps or Labels are issued.   As far as Tamil Nadu is concerned, the entire issue of Excise duty Label and Stamps are taken care by TASMAC (Tamil Nadu Marketing Sales Corporation). Tamilnadu ranks third in alcohol consumption after Punjab and Andhra Pradesh and therefore bulk of the use of Holographic Labels are in use here.

Also it is understood that Tamilnadu was the first state to introduce the anti counterfeitable Holographic Excise duty Labels two to three decades back which was subsequently followed by other states. The specification for the Hologram tender as seen in the Tender document floated by Tasmac is as below:

(2)  The suggested art work (at least 3 different designs) is to be submitted by the Tenderer containing the above security features along with the Tender Documents and Technical Specifications. The object for 3D Hologram and the design would however be finalized / furnished by the Department only at the time of placing orders.

(5) Type and Material to be used:   Tamper evident on Metalized Polyester Film of ultra clear EMCL grade with standard quality adhesive material on the label suitable to be affixed (non manual – mechanical application) on bottle cap and partly on the neck of the glass bottle through automatic mechanical applicator. The Hologram should fix firmly to the above portions. The Hologram should be as per the design approved and finalized by the Department.

(6) Colour:   Specific colors / Multiple colors. The Department will decide this from time to time.

(7) Thickness:   35 to 40 Microns and suitable for automatic mechanical applicator.

The logo or emblem and the 3D True Object as suggested by the Tendering Authority shall be incorporated in the hologram.

(11) Quality criteria: The quality and adhesion of the Holograms supplied should be suitable to the automatic mechanical applicator.

End Note: Sale of liquor in the state-run TASMAC outlets continue to be a major source of income for the Tamil Nadu government with a whopping Rs 21,680.67 crore earned as total revenue during 2012-13. Besides the revenue the Govt gets on account of Excise duty imposed for the sale of Liquor, the government also earns a revenue of Rs 1.73 crore per month approximately by the sale of excise labels an agency informs.

State excise labels are being issued to Indian Made Foreign Spirit (IMFS) and beer manufacturing units and Tamil Nadu State Marketing Corporation (TASMAC) to affix them on the IMFS, beer bottles manufactured locally and those imported from other states with the aim to ensure proper accounting of excise revenue and for preventing the flow of illicit liquor into the state. At present, the average monthly requirement of excise labels is believed to be 24.8 crore, the note said.

As per another data seen, the Alcohol sales in the state from 2004 to 2008 have registered a 61% increase. Also some data for the year 2006-07, 2007-08 and 2011-2012 were available on consumption of different varieties of Liquor. This will automatically reflect the requirement of Excise Labels.  All the figures seem to be incomplete as they have not described the details of all Liquors consumed.  However see  data shown below to understand the data seen in various places. 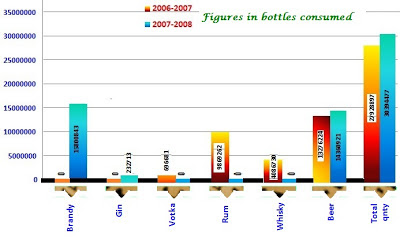 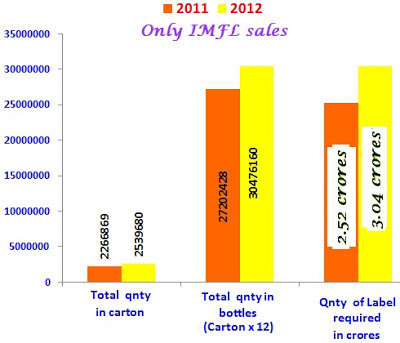 The article has been written to work out the average requirement of Excise duty Labels and not meant to study the sale of Liquor. Since the requirement of Excise duty  Label  is directly related to the consumption and production of Liquors, the study on Liquor consumption pattern was necessary. Many other states like Goa, Pondicherry, Maharashtra, Bihar and Andhra Pradesh too issue Excise duty Labels, but the data  could not be collected due to several constraints. However some picture were available from other sources.

Based on the entire data available and analyzing it, I presume that the requirement of Excise duty labels per month in various states where the Excise duty Labels are issued could work out to anywhere from 80 to 100 lakh Labels  per month. Finally I would like to repeat the disclaimer as stated below.

Important – Disclaimer: The writer does not assume responsibility for the data given for various states. All those have been obtained in personal meetings with various officials and the Print outs that we received, but were not signed even though some were hand written and given to us. Some information was also obtained from certain sites in internet.  Many officials in the Excise department were not willing to supply us the official copies as they considered the data to be confidential data.

However  the findings have been reproduced based on the data that we got in person, and in good faith though there is absolutely no reason to doubt that the data supplied to us will be incorrect.  At the most they may have some error margins.   The data  error margins could be 5 – 10 % as conversion from cases to bottles or bulk liters to bottles were difficult to work out since each state worked out the data  in their own  fashion.