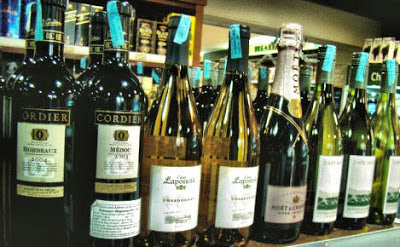 Written  by :  N.R. Jayaraman
The annual requirement of Excise duty Labels/ Stamps in different states were worked out basically on the production and sale of Liquor Bottles. The Liquor Bottles were in capacity of 100 ml, 200 ml, 350 ml, 500 ml and 1 litre. Since our survey was limited to the total quantity of labels required, the total no of bottles containing Liquors manufactured or produced for the state agencies that attracted Excise duty Labels/ Stamps were only accounted. If one tend to convert the liquors packed in the bottles into total volume of Liquor produced, the figure would run to several lakhs of liters alarming to us.

Delhi
The Labels pasted over the Liquor bottles will have to  have the  manufacturers name and address besides having Excise duty Label of the state in which the Liquor was produced. Since the Delhi state do not manufacture the liquors within the state no Excise duty Labels/ Stamps of their were issued.  See the consumption of  Liquor bottles  over the period from 2002-03 till 2007-08 . This will be the basis for computing the requirement of Excise Labels. 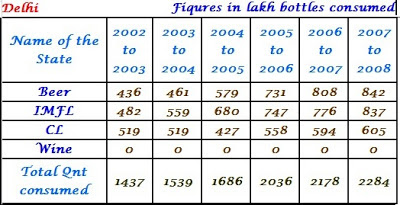 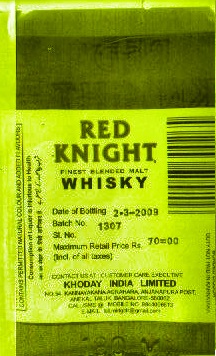 Delhi: Label on the Bottles indicate place of
manufacture and also the  Excise duty  label of the
state where they were manufactured.
These  Excise duty Labels found on the bottles
were not  issued by the Delhi State 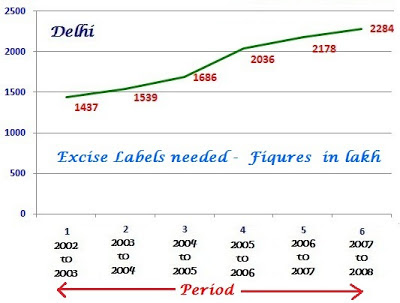 From the year 2009  the state has decided to issue Excise duty Labels/ Stamps of their own. The Excise department official opines that the  use of holograms as Excise Duty Labels in bottles have checked the sale of spurious liquor and has in turn increased alcohol consumption which in turn  account for the increased demand of  printing of Excise  duty Labels which they propose to print in India Security Press, Nashik.
Haryana, Punjab and Chandigarh

The issue of Excise Labels were proposed to be introduced by the Haryana Govts w.e.f . 2009.  The requirement per month was anticipated to be 5 crore labels per month as per the Excise department officials.  Since Haryana state did not manufacture the liquors within the state no Excise duty Labels/ Stamps of their were earlier issued.

The following graph will show the  quantity of bottles used  consumed in Haryana alone  so that the future requirement could be worked out whenever the state commence issuing Excise duty Label of their own.  However all the Liquor  bottles imported into these two states  were to be pasted with label with caption ‘For use in Haryana only’ and ‘For use in Punjab only’. 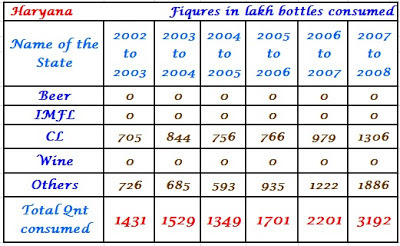 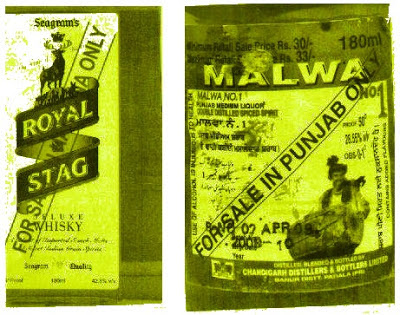 Haryana & Punjab : Label on the Bottles indicating place of
manufacture and caption reading  ‘ For sale in Haryana Only’ and
‘For sale in Punjab only’ with other state Excise duty  labels
where they were manufactured. 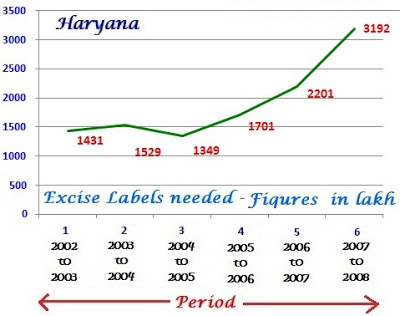 End note:- The figures for Punjab and Chandigarh were not available. The liquor consumed in both the states were brought from outside the state and  therefore did not warrant Excise duty Labels.  However it is understood that both the States have decided to issue Excise Labels from the year 2009 onwards and accordingly  Punjab state Excise dept has floated tender inviting supply of  Hologram and Excise Adhesive Labels for the period 2010-11  to be affixed on Liquor bottles of Punjab Medium Liquor (PML)  and Indian Made Foreign Liquor (IMFL). The tender states that the annual requirement will be 50 crore labels approximately which works out to 4.2 crore per month. Similarly the tender issued by the Chandigarh mentions the requirement of Excise duty Labels as approximately  0.85 crore Labels per month. This therefore puts the projected  requirement of  Excise duty Liquor Labels of all the three states to  2.66 +4.2 + 0.85 = 7.71 or roughly 7.8 crore labels per month  which simultaneously will speak the volume of liquor expected to be consumed.

The specification of Labels for Punjab as per the tender floated states the following features as requirement for Paper based Labels.
1. Intaglio Printing
2. Intaglio Rub Mark
3. Micro Lettering
4. Six Colour printing with Online Numbering
5. 12 Digit sequential numbers to be generated through electronic mode to be printed on every label as specified by the Excise and Taxation Commissioner. Three numbers of check digits to be generated out of 12 digits serial numbers of the same label through software by using mathematical formula. These 3 numbers to be printed on the label by using computerized variable data printed machine.
6. Specimen signature of the Deputy Excise & Taxation Commissioner (D)
7. Guilloche Design.
8. Emblem of Government of Punjab
9. Secret Code.
10. Printer Code.
11. Visible Fluorescent Ink.
12. Micro Printing with U.V.Ink
13. Nano printing
14. Die Punching
15. Colour Changing Ink
16. Any other Security Ink or security feature that may be considered useful.

One piece of information by way of interest here. The quantity of Labels does not reflect the quantum of Liquor consumed which will be much more as the bottles range in capacities like 100 ml, 200ml, 350 ml, 500ml and 1 Liter !!