Finally at the end of 1980 , the Reserve Bank of Australia were successful in developing a new polymer substrate intended to improve banknote quality. This plastic substrate called Guardian® was first used in 1988 for the Australian ten dollar commemorative note, which also incorporated a a see through window with a foil element called Optically Variable Device (OVD). However, this foil feature turned out  to be sufficiently not  durable and alarmed with the extent of public interference with the OVD, the notes were withdrawn and never re issued. So the central bank printed its next denomination, the five dollar note, on plastic and replaced the foil with a white printed element. Australia gradually switched its entire series to polymer notes from 1992 onwards.
The substrate Guardian® is manufactured by a firm called Securency International, a division of Innovia films under an agreement with Reserve Bank of Australia. These were also rolled out in smaller neighboring states around the same time. Innovia Security is the supplier of Guardian® substrate to other countries. It is learnt that over 24 central Banks spread in Canada, Chile, Costa Rica, Israel, Malaysia, Mexico, New Zealand, Paraguay, Romania, Singapore, Vietnam, Guatemala, Brunei, Mauritius Nigeria, Hong Kong etc have adapted Guardian® for the production of some of their Bank Notes and Currencies. Guardian® consists of three major elements. They are the base film called ‘Clarity®C’ the opacified print layers that enable offset and intaglio inks to adhere to the substrate, and security features that are either printed or embedded in the 75µ deep substrate. Clarity®C is base film that forms the foundation of Guardian® polymer banknote substrate. It is a high performance, biaxially oriented polypropylene film, ideally suited to banknote production. 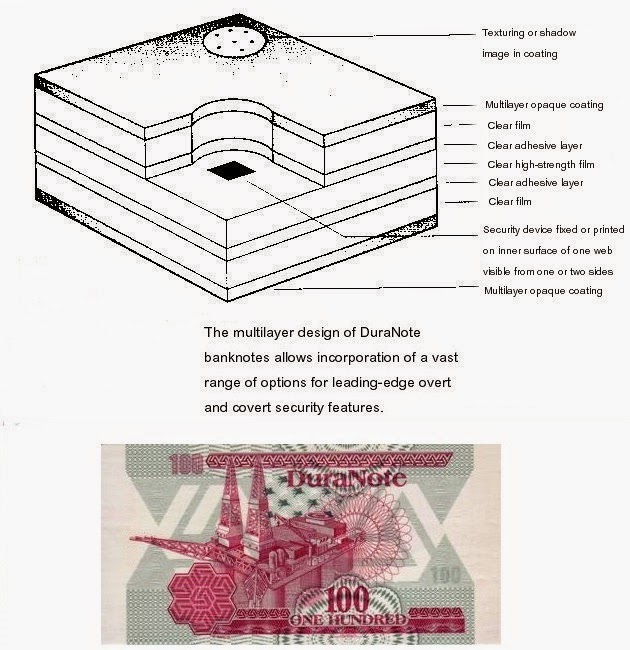 DuraNote
On the other side, in the year i.e 1980, Canadian engineering company AGRA Vadeko and US chemical company US Mobil Chemical Company in a joint venture developed a polymer substrate trademarked as DuraNote. DuraNote offered advanced counterfeit protection. One sheet of Duranote consisted of twenty one ultra-thin layers of OPP film, adhesive, coatings and printable surfaces. The field trials claimed that it had four times more life circle than the conventional paper substance and stayed crisp and did not dirty easily. These properties translated into reduced printing costs. In addition the manufacturers claimed that clear plastic window provided in each note along with choicest embedded security features would make the copying of notes very difficult. It had been reportedly tested by the Bank of Canada in the 1980s and 1990s, and test notes were printed for twenty one countries in regular currency printing plants with the same designs as per the regular Bank Notes. They were reportedly put for field test from the year 1997 besides testing by eminent security printer like Bureau of Engraving and Printing of the United States Department of the Treasury.
What exactly is Polymer substrates and their  the quality which is proposed to replace the paper substrate to print Bank Notes and Currencies? The substrate proposed is not pure plastic material, but is a combination of Cotton and Polymer substrate. The development is combining polymer and cotton to prepare the substrate sheets. 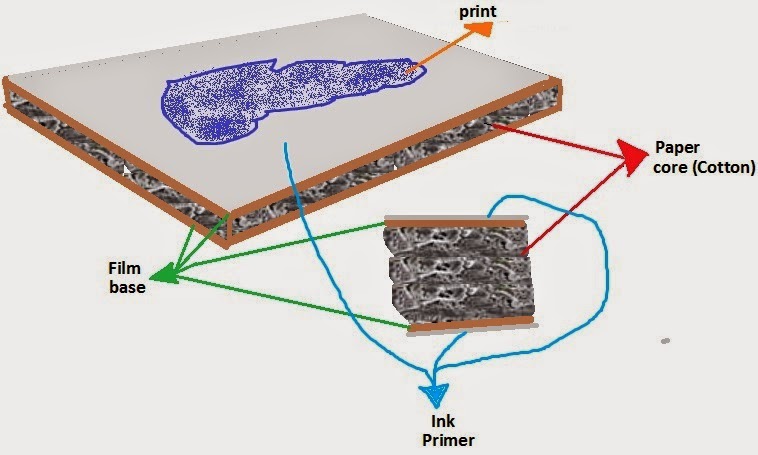 Structure of Polyester based substrate

An alternative approach is a cotton paper core protected on each side by thin film layers. The film layers provide protection against soiling and tearing. Both approaches enable common banknote paper features such as watermarks and threads to be used.
Giesecke & Devrient GmbH, parent company of Louisenthal Paper mill in Switzerland, recognized this potential and started to develop a completely new banknote substrate that would combine the benefits of cotton and polymer. In 2008, G&D launched this pioneering substrate called Hybrid™. The G &D produced substrate is a sandwich material composed of paper inside and polymer on the outside . 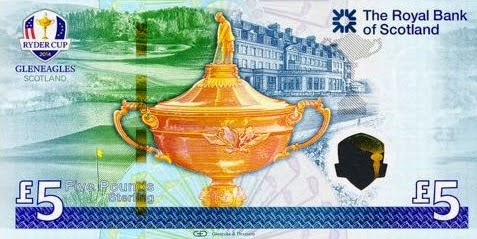 Printed on Hybrid™
The first ever commemorative banknote on Ryder Cup, Europe issued by the Royal Bank of Scotland (RBS) used the Hybrid™ substrate including substrate embedded features. The Royal Monetary Authority of Bhutan (RMAB), Bhutan’s central bank, has reissued its two lower denominational banknotes using Hybrid™, a paper/polymer substrate made by Louisenthal. The Bank of Jamaica issued a new series of banknotes in 2012. The $100 Jamaican note is made of the Hybrid™ substrate. The notes were printed by Giesecke & Devrient.
Quote:-*
HybridTM banknotes are ideal for challenging conditions. By uniting cotton and polymer banknote technologies, we have succeeded in creating a perfect composition. HybridTM banknotes combine proven security with a considerably longer service life – and the result is a banknote that is slow to soil, does not become limp, and yet still enjoys the trust of the population because of its similarity to the well-known cotton banknotes.
-Unquote
As per Louisenthal mill statement:-
Quote:-*
“Hybrid™ brings the advantages of paper banknotes and polymer banknotes together in an innovative combination of protective polyester film around a cotton fiber core. Already proven in circulation on three continents (Africa, America, Asia), Hybrid™ banknotes combine security with durability and ensure public acceptance.
Hybrid™ ’s core can be exclusively customized with embedded watermarks, security threads, and machine-readable elements to ensure the banknote substrate is secure against counterfeiting. Due to its polyester film, Hybrid™ banknotes are durable, remaining clean and stiff even in extreme circulation conditions. Printing on Hybrid™ enables exploitation of the full potential of security features and intaglio printing to provide the trusted touch and feel of banknotes”
– Unquote
G & D also manufacture 20 % synthetic fiber mixed paper substrate which of course is not polymer substrate. According to G & D ‘Synthec®’ is the enhanced durable banknote substrate for improved quality throughout the banknote’s lifetime. The synthetic fibers and ‘LongLife’ protective coating of Synthec delivers an optimized combination of outstanding mechanical stability, stiffness, and anti-soiling properties’. 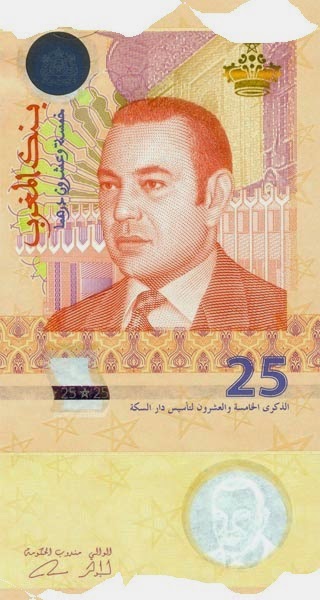 As per the latest news the new Swiss banknote series is set to be printed using substrate called Durasafe® manufactured by Fortress paper operated through Landqart mill, a Switzerland based paper mill as invented in collaboration with the Swiss Federal Institute of Technology (ETH) Zürich. The same substrate appears to have been already used on one of the Bank Notes issued by Morocco. Landqart produces banknote, passport, visa paper.
As per Landqart :-
Quote:- *
“The DURASAFE® is the innovative new composite paper-polymer-paper banknote substrate from Landqart AG. It is the platform for the world’s most secure banknotes. DURASAFE® is composed of two cotton paper outer layers with a fully transparent polymer core. The paper is high security cylinder mould made containing a watermark and security fibers and other traditional security features including easy to recognize Bank Note Paper tactility. The polymer core adds strength and security, while allowing windows to be formed virtually anywhere on the banknote. Windows are formed to look into the core of the substrate, or directly through the substrate”
-Unquote
De La Rue is the world’s largest commercial banknote printer and Printing machineries and equipments manufacturer whose products have been supplied to several Central bank print units in various countries. De La Rue has launched Safeguard®, a polymer substrate similar to Hybrid and Durasafe substrates, but has differently processed substrate. Safeguard® is the result of an intensive four year development  programme that started when some of their customers were eager to have polymer as a substrate instead of paper substrate and were looking for an alternative source of supply.
Quote:- *
According to a De La Rue press release dated 18 November 2014, the Central Bank of The Gambia will introduce a 20-dalasi banknote before the end of 2014 to commemorate 20 years in office for President Yahya Jammeh. This note was designed and printed by De La Rue on Safeguard®polymer substrate.
Polymer banknotes are banknotes made from a polymer such as biaxially….. issue a 20 Dalasis banknote printed on De La Rue’s Safeguard® polymer substrate.
The Banque du Liban has launched a new commemorative polymer banknote produced on De La Rue’s Safeguard® polymer substrate. 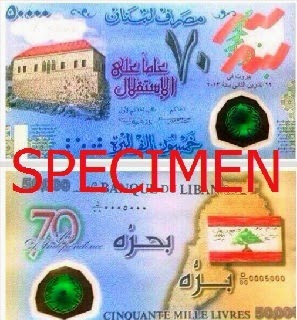 Effects of altering sequences of printing