What is digital Water marking?
‘Digital Watermarking’ is an extended technology of ‘Water marking on paper’ concept. By embedding various types of information in multimedia like video, audio and digitally printed images which are personal to the owner (Copyright), they can be protected. While some digital data is meant for only reading, some are meant for commercial use if any with due permission from the author. The Digital Water marking process is one of the best process deployed for protecting copyright multimedia data and images besides photographs on net held by private individuals because multimedia content and data can easily be copied, modified and redistributed again in illegal manner. 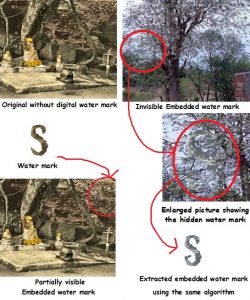 A digital Watermark can both be in invisible as well as in visible format. It is inserted in the form of binary bits to the image to hold secret information. While the visible watermark  is visible to naked eyes, the invisible watermark cannot be seen by the viewers and therefore invisible Digital water mark  is considered to be more protective to safeguard the copyright images on net. The added digital Water mark in the form of information can be more or less transparent to make it either easy or hard to notice. Few researchers suggest the origin for embedding and decoding the secret information to an interesting historical story which sounds logical.

Histiaeus, Greek by birth was tyrant of Miletus (name of a city in the then Greece) under the rule of Darius, the Persian King in Asia Minor and helped him win many battles. Histiaeus enjoyed the fullest confidence of King Darius who after triumph in a war decided to take Histiaeus to Susa along with him, a place ruled by him. Though internally disinterested to leave Miletus, the tyrant Histiaeus could not dare to disobey the orders of the King and therefore compelled to go with him. After he went to Susa, he planned to somehow return back to Miletus and therefore secretly organized a coup in the land of Ionia through some of his close aids so that the King Darius would send back to Miletus to contain the revolt. Since he cannot come out openly to organize the coup in 499 BC, he shaved off the head of one of his most trusted slave, tattooed secret message for revolting against the Persians, and then waited for his hair to grow back. Once the hair over the slave’s head had fully grown the slave was sent to Miletus to meet the trusted confident of Histiaeus with instruction to shave off the hair to read the message.   This was perhaps the first ever concealed message sent covertly over some one’s body and method  to decode the information. The art of concealing secret information covertly over ones’ own body which could be read only if the top layer is removed, triggered the invention of concealing secret information in images and then extracting the hidden ones from inside so opine some of the researchers. 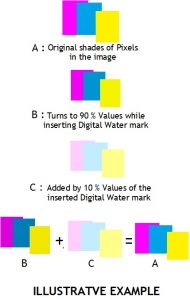 Any image on net or other multimedia is nothing but combination of Pixels and each Pixel is represented by few tiny binary bits. Similarly the Digital Watermark is also a pattern of bits inserted into a image, audio or video file in the form of invisible binary bits. The Digital Watermark is added to a picture or a photographic print by changing the image on the pixel level. It does not mean that the image is changed from its original appearance. Every image on net consists of several small square dots called pixels (something similar to the halftone dots on printed images) and each pixel forms one dot of the image reproduced in net by way of digital signal.

The invisible Digital Water mark which is also in binary bit in pixels is embedded in such a manner that the changes made to the Pixel values are perceptually not noticeable. Only certain specialized electronic devices could scan and extract the hidden information to identify the embedded content. The basic theory involved in the digital Water marking is insertion of pixels that merge with the pixels in the original image. 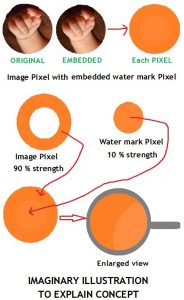 For example 100% RGB (Red, Green & Blue) values of the original Pixels would be reduced to 90 % values and 10% values of the same RGB (Red, Green & Blue) will be compensated by the pixels of the Watermark inserted. The resultant image will definitely be not that of 100 % in original shade, which may not glaringly appear to naked eyes, but could only be detected by gadgets as 10 % Water mark pixels that are inserted merge with original image pixels in transparent form without visually affecting the shades in the images reproduced. In short the Digital Water marking is modification of the original pixel values. In case of Videos and audio it is embedded in a noise-tolerant signal to uniquely identify its originator. 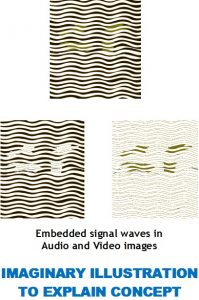 Spatial Domain mostly modifies the image pixels and both merge with each other i.e Watermark image merges with the pixel of the host images.

As compared to ‘Spatial Domain’ the most widely used technique is ‘Frequency Domain’ which transforms the images into different frequency bands. The ‘Frequency Domain Watermarking’ has three widely accepted techniques namely Discrete Wavelet Transform (DWT), Discrete Cosine Transform (DCT), and Discrete Fourier Transform (DFT). These three techniques are not explained in detail the subject being electronic in nature and difficult to understand by the printer. There is yet another technique under this category called Particle Swarm Optimization (PSO) for protecting digital media copyright.
Chetna Vide ‘A Monthly Journal of Computer Science and Information Technology’- IJCSMC, Vol. 3, Issue. 9, September 2014, pg.586 – 591 mentions:

Quote:-
………………. Digital watermarking is a technology for embedding various types of information in digital content. In general, information for protecting copyrights and proving the validity of data is embedded as a watermark. A digital watermark is a digital signal or pattern inserted into digital content. The digital content could be a still image, an audio clip, a video clip, a text document, or some form of digital data that the creator or owner would like to protect. The main purpose of the watermark is to identify who the owner of the digital data is, but it can also identify the intended recipient.

The DCT allows an image to be broken up into different frequency bands, making it much easier to embed watermarking information into the middle frequency bands of an image. It has become easy to connect to the Internet from home computers and obtain or provide various information using the World Wide Web (WWW). All the information handled on the Internet is provided as digital content. Such digital content can be easily copied in a way that makes the new file indistinguishable from the original. Then the content can be reproduced in large quantities. For example, if paper bank notes or stock certificates could be easily copied and used, trust in their authenticity would greatly be reduced, resulting in a big loss. To prevent this, currencies and stock certificates contain watermarks. These watermarks are one of the methods for preventing counterfeit and illegal use. Digital watermarks apply a similar method to digital content. Watermarked content can prove its origin, thereby protecting copyright. A watermark also discourages piracy by silently and psychologically deterring criminals from making illegal copies………….

Know everything about Paper -3