Every Supply order or Contract placed for the supply or import of Goods is covered by certain conditions vide the contracts. One of the conditions that govern the terms of supply is the delivery term. The mode of delivery, especially when goods are imported are governed by certain internationally accepted terms such as FOB, FAS, CIF and so on. What are the terms and why are they important ? That is spelled out in INCOTERM. How many of you know what is meant by INCOTERM ? INCOTERM is abbreviation of International Commercial terms. This term governs the Sales and Purchase practices, and form part of any standard Contract or Supply Orders. The INCOTERMS is revised every ten years and are internationally accepted terms which has been compiled in deference to the spirit of 1980 UN Convention on Contracts for International sale of goods. The latest has been published in the year 2010. The INCOTERMS are series of pre-defined commercial terms published by the International Chamber of Commerce (ICC) widely used in international commercial transactions. Remember one thing before you read further. The INCOTERM is not law, but set of standard commercial practices adhered to around the world and when form part of the supply order or a contract it becomes a binding for both the parties and become basis for arbitration in cases of disputes.
Each term in INCOTERM specifies:
So by understanding the INCOTERM and properly incorporating it into the Supply Orders or Contracts , both the Seller and the Buyer will be relieved of unnecessary disputes and litigation in the event of loss, damage or other mishap to the goods from the time of supply to the receipt of the goods.
The INCOTERM only interprets the terms of delivery and states the obligations of the Purchaser and the Supplier in respect of the goods procured. They apportion transportation costs and responsibilities associated with the delivery of goods between Buyers (importers) and Sellers (exporters) and reflect modern-day transportation practices. The INCOTERM rules are accepted by governments, legal authorities and practitioners worldwide for the interpretation of most commonly used terms in international trade. They are intended to reduce or remove altogether uncertainties arising from different interpretation of the rules in different countries.
The INCOTERM does not interfere with the specifications of the material in any manner. This term plays vital role when the goods are imported. One of the awkward position which can some time arise in the Contract relating to the importation of goods is the non-performance of the obligation of the Seller/Buyer due to export and import prohibition, unforeseen an unavoidable impediments beyond both of their control. The INCOTERM enable the parties to understand the meaning of key words like FCA, FOB and CIF terms which are commonly used in any contract. Once both the parties understand the terms and its implication, there would be no misunderstanding.
How does the INCOTERM help the purchaser and the Seller? In case of the loss of the Goods, theft , damage during transit , it will be easy to claim the insurance, Customs or excise duties levied etc.

The INCOTERM is divided into four groups such as : 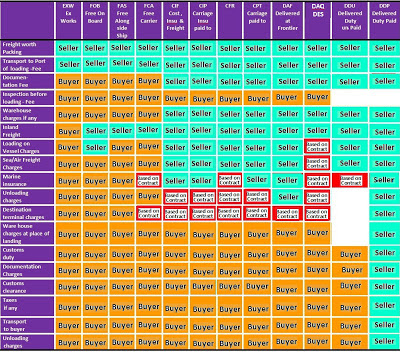