10. Graphic Arts Film : Some kind of plastic substrate base film on whose surface some kind of  photographic sensitive material remains coated. These films are meant  to make negatives or positives suitable for  printing press. The emulsion coated on these films yield high contrast images suitable to process the plates or blocks for printing. They are also called litho film.
Various types of Graphic arts films are available to suit for both black and white and colour separation work in the form of Panchromatic films. The films come as matt base or normal base. The matt base is suitable for Photo polymer plates making  for better contact with the plate as the rough finish on film ensure better plate-film contact.
The films are supplied by various photographic film manufacturers like Agfa-Gevaert, Ilford, Kodak, Fuji, Dupont, Indu (HPF), Konica etc. Besides those indicated, there are several other manufacturers  who offer photographic films world wide. The graphic arts film comes in different thicknesses suitable for halftone work, image setting and line work.Special films suitable for use for processing the photo polymer plates are also available as they produce high degree of density (black non image areas).
11. Graphic Design: A graphic image is one that convey visual message of the product in print form. The graphic design collages the (combines) illustrative designs and typography to convey the message. The designer produce attractive design element to communicate the messages to an audience. The message may be only an Logo or a simple message in print. Graphic design is a creative process that combines art and technology to communicate ideas. In order to make the graphic design more effective the designer and the client will discuss what kind of message is to be conveyed in the specific design format to effectively attract the targeted audience. 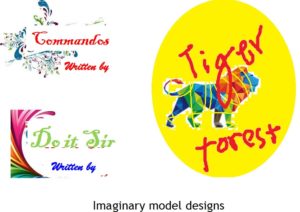 Type based designs are nothing but words assembled in an attractive way to convey a message instead of using pictures. A designer uses different styles of fonts, typescripts, type size, colors, borders, shadings, columns, margins, spacing etc to make the text appear unique and attractive. When he combines both text and images to convey the message, it should be eye catchy. A graphic designer is the real bridge between the client and the audience. His aim is to convey the message to the audience in an attractive way, which should have a good response as well.  A graphic designer should be able to tempt the audience to buy the product. The images used for the graphic design may include drawn, painted, photographed or computer-generated illustrations.  In short, graphic design is visual communication.
12. Gravure : One of the four major methods of printing . The printing by Gravure is done using metal cylinders etched with millions of tiny wells that hold thin ink. Gravure is a high quality process that is capable of producing printed images which have a continuous tone effect similar to the photographs. Unlike other processes for which some form of image carrying plate or metal block is required, the gravure process utilizes a the metal printing copper cylinder itself on which the image is etched. The printing impression is made by the transfer of ink from depressions (cells) of various sizes and depths that are etched onto the copper cylinder. The various sizes and depths of the depressions in lieu of the image create the different densities of the image to match the tonal shades  of the original. The areas of the cylinder that are not etched remain the non-image areas.
Gravure though a direct printing method has the images depressed (sunken), the reverse of the Letterpress printing technique where the image areas are raised . Though this process of printing is most ideal for weeklies and magazines which have large circulation, Gravure is used in many packaging applications, like cartons and pressure sensitive labels. 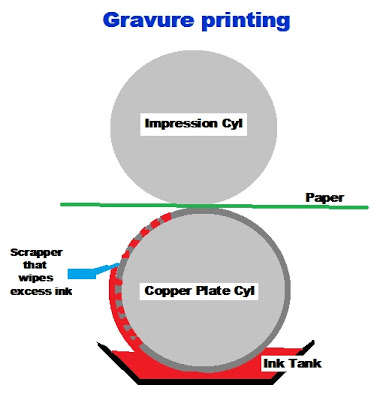 13. Gripper Edge : The front edge of the sheet which is held by grippers on a sheet fed press before impression takes place. The grippers hold the paper firmly to allow perfect register in the print station and release them only at the delivery station. Therefore the paper printed on the printing machines will have sufficient white margin or non print areas to enable the grippers hold the paper without affecting the print image. 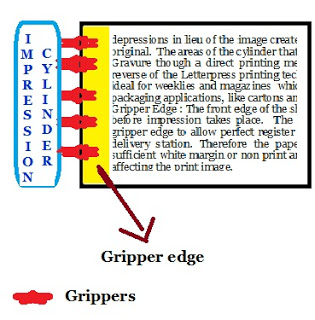 14. Gutter Margin : Every printed book will have white space in each page, which is non printed areas around all the four sides. The inner white areas of the pages which goes in to the stitching/ sewing edge for finishing the book is called the gutter margin.

15. Glass line paper: A wood free pulp paper which will be transparent, glazed and polished on both sides.

16.Guillotine : Cutting machines meant to trim the printed sheets and paper to sizes. Both manually operated and automatic programmable guillotine machines are available in the market.

…………Additions to alphabet G to be continued under G/3