1. X-height: X-height is the height of lower case letter X which is the base body size of the type font. The height does not include the ascender and the descender. Actually the font readability depends only on the X- height appearance. This factor can be seen if you see the two types of fonts set in the same point size. Though the point size will be same, the appearance will be different due to X-height.

2. Xerography : A method of reproducing the images by electrostatic process, i.e a photocopying process. The originals are copied either on plates or drums coated with Selenium which has the capacity to hold the Electrostatic charge fed through corona wires, and then discharge them on paper or other substance through the same process.
Due to the said electrostatic charge the selenium plate holding electrostatically charged images accepts the toners(ink) in those areas when applied. As they still hold the electrostatically charged image carrying toner, the paper when contacted with it absorbs the image on their surface due to the electrostatic positive charge given on the paper. The paper thus getting the image transferred on to its surface hold them till the toner gets fused by the mild heat process to display the image on them without getting rubbed off. This is the simple principle ox Xerographic process.

Originally the Xerography, then called as Xerox was used for producing black and white copies, but with advancement of technology, it has become possible to get color copies could also.
3. Xenon lamps/ lighting: In the Process work the Xenon light is considered to be one of the best light sources for reproducing colored originals since the spectrum colors of Xenon lamps match very close to spectrum colors found in the rays emitted by Sun. While in process photographic reproduction various light sources such as Arc Lamp, Incandescent lamp and Halogen lamps are used, still the best preferred light source is that of Xenon for reasons stated above. In addition to the best wavelengths emitted by Xenon lighting compared to other light sources, the added advantage is the life of the lamps which is few more times than that of the other best light sources.

1. YCMK : This is the abbreviation of Yellow, Cyan, Magenta and Black color in the primary color theory.
2. Yellowish paper: The paper which contains higher amount of wood in the pulp during paper manufacture turns yellowish in due course. Also, the unbleached paper is dull in color resembling yellow. Such paper stocks are all classified as Yellowish Paper

1. Zig Zag folding: This is one of the folding techniques adapted for the supply of continuous stationery for printing on Desktop printing, Electric and Electronic typewriters and other billing and statement printing equipment. Depending upon the size of stock supplied, there will be tearable strength perforation at the end of each page so that when printing of one page is completed, they can be simply torn and issued. The perforations can be made to A4 size, A5 or as per the demand sought by the customer. 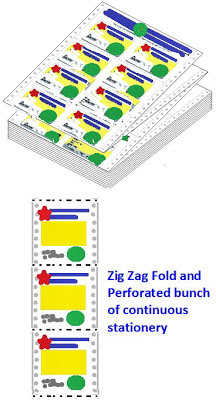 2. Zinc White: This is an organic compound and a pigment often added with Paints and Inks to make them appear whiter. This is substitute to another white pigment called Titanium Dioxide called Tio2. Zinc white is finer variety than Tio2.
3. Zip-a-tone:  Zip-a-tone was introduced several decades ago to help the artists put different tonal effects in the line drawings through variety of dots and screens. They were supplied as pre-printed films on thin transparent film and textures or several elements like dots, screen tints, wavy lines etc could be transferred on to another substance or surface by simply rubbing the back of the film after positioning them on the base where it needs to be transferred.
This is earlier generation of the Screen tone Pre-printed sheets which serves the same purpose and supplied on thin paper base coated with a layer of wax on which the textures and tints are laid by printing process with special ink and then an adhesive material is applied again which when rubbed against any surface will stick with it. The sheet is kept over the paper where the design is to be transferred and rubbed with a stylus on the back side. The backing is then peeled off, leaving the texture adhering to the paper against which the pressure was applied. 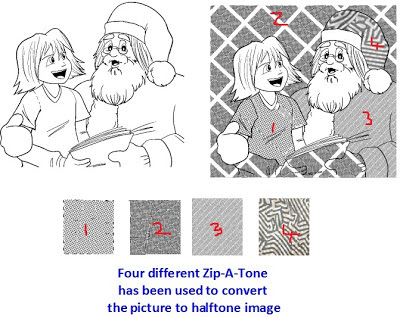 4. Zoom lenses:  A special type of lens which enables the distant objects to be viewed closer as the lens fitting contains a combination of different convex and concave lenses fitted inside to a particular design. This is an mechanical assembly that allows to alter the  focal length  to bring closer the subject viewed or to project an image bigger than the actual size. Such lenses are used on  Enlargers, Photographic cameras, projectors, process cameras etc.
5. Zig Zag Lens: Zig Zag lens is nothing but a prism used on the process camera to laterally reverse the images during negative making process. The Prism fitted Cameras are used for producing negatives for making blocks for letterpress printing.