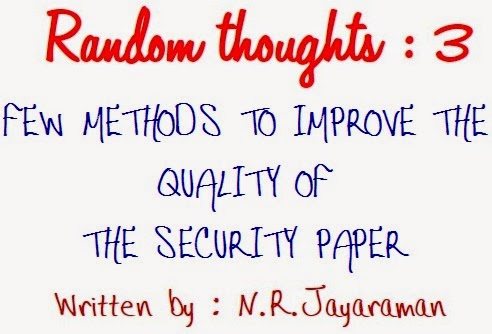 In order to reduce the waste percentage of the printed stocks it is necessary that simplified system is worked out to enable better feed backs between the presses and the paper mill to sort out the technical problems arising out of Paper during printing.

It was often noticed that in a press where continuous printing is going on round the year, especially like Currencies, Stamps and Bank Notes to which specially manufactured paper is supplied, the paper has been found to be the cause of higher rejection. The details of the paper that caused the technical problem could not be identified by the printers quickly so that the corrective action can be initiated in the Paper mills. This is a major problem faced by those establishments that print the said documents continuously round the clock with huge stocks of paper stacked in their stores.
Even though the practice of first cum first served policy in issuance of Paper to the first printing area is enforced, in the subsequent printing processes you cannot expect the printer to ensure the use of same sequence of paper lots due to several technical issues such as drying of ink, paper stretch etc. Besides the said issues, the Printed lots generally gets mixed up in print storage in each of the print departments however carefully one may have stored them as the storage area is often a limited one.
During printing when certain defects are observed, it is customary to conduct a ritual like seeking information from the issuing department on the details of the paper issued. They will then go through the records to find out details such as the dates of receipt of such lots at stores, the dispatch dates from the supplier etc, etc which consumes time and human energy. Since the printed lots gets mixed up the details so collected may also be messy.
And again the dispute between the supplier and the customer persists. The customer may say that the problems pertained to a particular lot of paper and the supplier may seek more and more details like date of receipt, temperature, seasoning time, arrival of the shipment, and other receipt details which cannot be easily identified and given. The dispute generally linger on, and by the time an agreement is reached with regard to the details of the defective lots, usual apologies follow with the assurance to supply better paper in future. One fails to take note of the fact that by the time an assurance is obtained few thousand more tons of paper would have been manufactured and kept. This is an endless process. Therefore in order to work out some simplified system to give quick and correct feedback on the paper lot that caused the problem an imprint can be printed in the paper making stage. Such an exercise can certainly reduce human energy in tracking and tracing and ensure faster communications with fool proof details to take corrective actions in few hours.
METHODOLOGY
1. Whenever the Paper is manufactured, an imprint can appear beyond the print edges but inside the cutting edges of the paper in the web in such a manner and position that the imprint will still appear after the Web paper is trimmed to size and meant for printing machines. The imprint can be done using a Ink Jet printer.

2. For example the imprint can begin with date something like 01.01.2014 etc which should be changed by the supervisor at the beginning of each day from a central command or it can be fitted with auto change date system.

3. Date to be followed by the shift prefix say “I” for the first shift, “II ” for the second shift and “III” for the third shift and so on.

4. If the sheet row in the web is first the code could be F, and for the second it could be S and so on. For the machine detail indicate A, B and so on (See the illustration to understand the sheet row).

5. The serial no of sheets can then begin say starting from 00000001 for the first row. Again 00000001 for second row also as the sheet position will come as prefix or anything like it.

7. I guess that the consumption of ink will be very minimal. In fact it will not be even 1/1000th of the cost of paper per MT.

9. For example the paper lots produced on 1st January 2014 in the first shifts will have the following imprints.

11. The fitment will also be simple and not complicated as the jets are to be connected to a rod over web in between the drying unit and the winding unit. 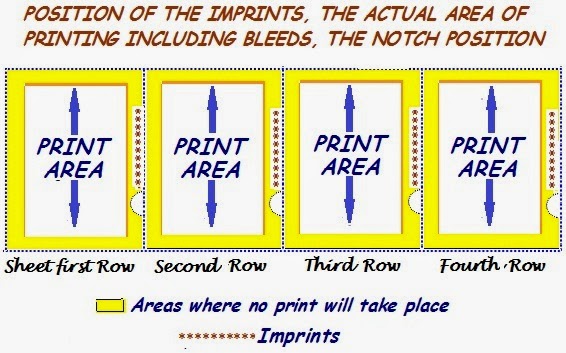 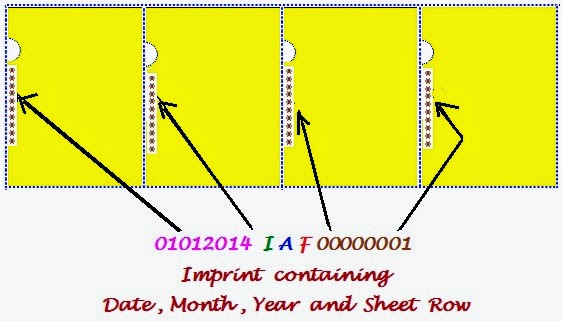 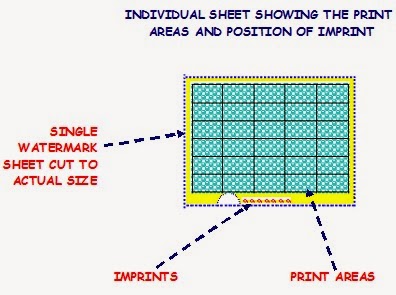 What are the advantages ?
1. While the paper is manufactured the paper edges are also watermarked as Front, Middle or the Back edge of the paper . This can be dispensed with.

2. The ream label contains the name of the operator, the date of printing, the shift, personnel who handled it etc. This can be discarded by pasting only the firm’s label .

3. In the event the presses face problem in a particular lot, they can easily identify the correct sheet details and communicate to the manufacturer for taking corrective action.

4. Once the details are received from the customer the manufacturer can immediately identify the problems or identify the erring crew for the lapses without wasting time.

5. It will be easier to track the faults in minutes with the details received. The complainant will also find it easier to send the correct information pertaining to the defective lots.