(Written by  N. R.  Jayaraman)
Remember one important aspect in Project Reports now being discussed. All the Project Reports may not be same. They differ on subjects. What we are discussing is Project Reports for Production oriented industries where machineries and equipments are involved. However for non productive Organizations which may be service oriented, the production norms, machine output and output analysis will not form part of the reports. They may merely discuss and narrate the manpower requirement, their duties and sundry equipments and tabletop machineries including several computers to perform various activities which can not be quantified. Those Project Reports will be totally different than the one which is now being discussed. How the Project reports normally highlight the norms and other factors in a particular fashion are given to understand the subject. 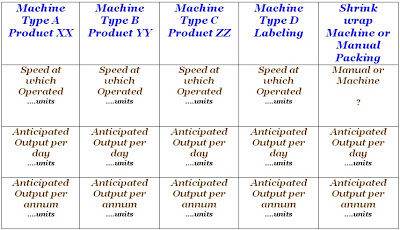 Anticipated
Output Analysis
How do the Capacity and Output prescribed for the machineries and equipments in a newly formed Organization? The Project report generally indicates the approximate x unit production initially by calculating in the following manner:
‘’Fixing up the initial capacity by approximation method based on the suppliers advice or as indicated in the quotations received for the product and then carry out the exercise based on actual production achieved over a period of six months. By alternative techniques wherever feasible the output norms are revised to fix new targets’’.
The Project reporters generally keep some such production data. How the approximation method is calculated? See the following illustrative example to understand approximation method for fixing minimum-maximum production range. Let us take the case of Printing machine production. Supposing a printing machines runs at a rated speed of say 6000 Impressions per hour and it works for 8 hours shift. For one year it will theoretically produce 6000 sheets per hour x 8 hours x 365 days = 17520000 i.e sheets.
Can this figure be taken as authentic production achievable figure? No, this is only theoretical calculation used as a base for calculation of actual. Out of 365 days in an year the effective available days for working will be only 261 days for Govt organizations after deducting around 104 days of Saturdays and Sundays per annum as holidays (365-104=261). Further deducting officially declared holidays of 14 to 15 days the available working day shrinks to 261-15= 246 days. This thus brings down to the theoretical achievable production to : 246 days x 8 hours x 6000 sheets per hour = 11808000 sheets.
However this figure too is not correct. Reason? Even if the machine works in 8 hours shift generally the machine make ready time before machine start up and closing break for lunch and machine cleaning time in the evening takes away roughly two hours in 8 hour shift. During machine running another one hour may be wasted everyday on account of machine mal function, production related problems etc and therefore effectively one can work effectively only 5 hours in a shift of 8 hours. This thus puts the effective production achievable to : 246 days x 5 hours per shift x 6000 sheets per hour = 7380000 sheets (42%)This thus indicates only 42 % achievable production against the theoretical working figure (7380000 ÷ 17520000 x 100 =42%) in a Govt set up while the same may be higher in the non Governmental Organization. In non Governmental Organization the production may go up to 57 % as they have only one weekly holiday (365-50=315-10 holidays per annum = 305 days) and daily downtime (8-2.5=5.5 hours) will be drastically reduced with certain stricter norms. We can therefore rate the output in such units to the following: 305 days x 5.5 hours per shift x 6000 sheets per hour = 10065000 sheets  (57%)
Now the question will be which one is the correct production achievable figure?
42% =7380000 sheets
57% = 10065000 sheets
Taking both scenario into consideration the minimum output per machine initially may be fixed at 8722500 sheets (7380000 sheets + 10065000 sheets ÷ 2 = 8722500) per annum consisting of 275 working days ( 246 + 305 = 551 ÷ 2 = 275 days) i.e 49.5% achievable production against the theoretical working figure at 8 hour shift working.
This figure will be reviewed after one year production related problems and scopes for improvement, worker efficiency, machine speed adjustments etc. It will be easier to calculate the norms in the above manner for machineries and equipments which produce the finished product in one go while the other processes like quality check, packing etc -which may be carried out in manual process- will follow later which may be manual operation with separate norms. In the above manner after fixing up the initial norms per machine and per person the actual norms to be established will be done by observing the production activities in the next few months.
However it will be difficult task to fix the norms for machineries and equipments while manufacturing a finished product with combination of few parts of different nature. It will not be possible to fix the norms like the above example of printing machines. It will be done in a different manner. The general formula to fix the targets in such cases may be given in the Project reports almost in the following manner:

Final out put per day with one machine in each variety as mentioned above it may be possible to produce maximum four products in 8 hour shift.

All about printing papers …..2