In  1960s, as an improvement in the conventional Plate making technique in which the plates used to be coated with a light sensitive solution on a whirler, dried and then exposed, a modified plate making technique called ‘wipe-on’ plate making system, wherein a ultra violet light sensitive liquid emulsion were hand coated with a sponge on to the plate and further processed instead of spreading and drying the sensitive emulsion on a whirler before final processing.

Besides Wipe on coating, Pre -sensitized coated plates were also made available by some of the firms, especially by a firm called Technova Imaging Systems (now the firm is offering Digital Pint solutions and plates for various processes like CtP) , that reduced several of the intermediately process. These two processes in nutshell eliminated the use of whirler with heater for coating the plate.  The wipe on plates and the Pres sensitized plates were inexpensive and easily processed but in the case of wipe on plates it usually suffered from inconsistencies of emulsion thickness, because they were hand coated. Some of the plate innovations like process free plates offer unprecedented benefits for printers since both equipment and steps have been removed from plate making, thus streamlining the path from computer to press.

Further developments took shape in the field of Plate making (for printing by Offset , Letterpress, Flexo or Intaglio) with the introduction of CtPs (Computer to plates system) that eliminated several intermediately steps thus saving time and cost though the one time initial investment was heavy. For the presses that print volumes and varieties through the year, with supplies to be made in short time span, the CtPs were a boon. However much smaller units could not afford the CtPs. The development in Plate making /Printing took further leap with the introduction of Digital technology  (Also read : Recent Developments) which totally eliminated plate making and direct print on any surface through either Letterpress or Flexo or by Offset machines was made possible. However the Digital printing too had its own limitations in the application of printing volumes and fine arts. Thus it became evident that the Plate making process in some manner or the other for making plates to print by Offset, Letterpress, Gravure, Intaglio or Flexo cannot be altogether eliminated.  However it was realized  that some alternate technology  could be devised to reduce the processing of the Plates meant for printing through  the machines.
In the recent years there has been emergence of several Plate making techniques/ systems developed by few firms. One interesting development that has emerged has been the reconverting of uncoated, blank grained anodized aluminum plate into reusable plate i.e converting the plate from hydrophobic to hydrophilic state, so that they don’t need any re coating of aluminum at all and direct imaging is made possible. This process is applicable on anodized aluminum plates only which can be reused several times without going in for fresh anodizing process. Earlier the Anodized Alluminium plates once used were discarded as further  unserviceable plates or re anodized to make them reusable.
As per the new invention, a carefully controlled femtosecond laser pulse coating modifies an aluminum oxide surface to create a highly hydrophilic imaged layer to accept images. According to the firm which has developed this technology named ‘Miracle technology’ claims that it does away with aluminum coatings and graining of plates processing entirely. (Read more information  in:  Miracle  Technology and  Verdigris project.com )

The benefits of this technology is the potential elimination of all chemicals in plate coating, organic solvents from the coating process, as well as all requirements for processing equipment and associated chemistry. It would also have major environmental benefits by drastically reducing the demand for aluminum within the printing industry. After use the plate is cleaned with a standard plate cleaner and reverts to its normal hydrophobic state. The Miracle technology has the potential to provide a re-writable surface which could in turn, provide a plate which could be reused several times.( http://miracle-plate.com/)
Another invention called CreoScitex “SP Plateless Technology” is a plate imaging system where a plate could be imaged, and re-imaged, by spraying an ink receptive coating (Agfa Lightspeed) on while the plate was still mounted on press. It would drastically cut down the quantum of manufacturing, cutting, and shipping new plates used for making printing plates. 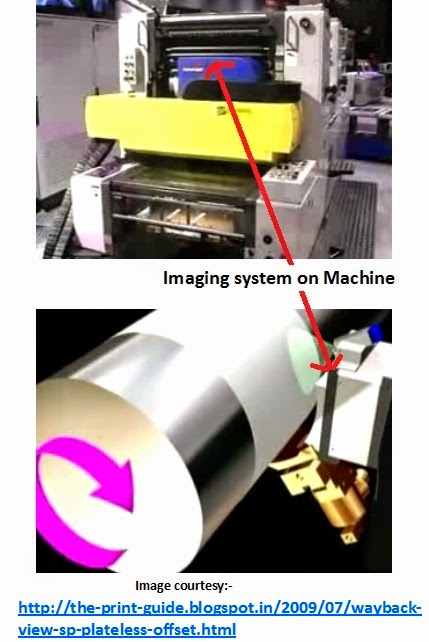 ‘ Plate less Digital Offset Printing called Agfa LiteSpeedis a patented lithographic coating liquid (US0603750,EP00849091,JP03122717) for application on-press and fully compatible with the CreoScitex SP ™ process. LiteSpeed offers new perspectives for high quality, short run length applications. ( Read more comments on the development in http://printplanet.com/forums/printing-industry-news/18670-miracle-plates )
On press, it is first sprayed onto a hydrophilic substrate, then imaged, and again cleaned after the print job is finished. LiteSpeed forms a thermally fusable coating :during imaging . Fine thermoplastic particles are fused together and sprayed onto the substrate to form the printing image. The technology is strongly related to the Agfa Thermolite processless plate. No processing device, and no development chemistry are needed. A wash-off step is required after imaging, which is carried out on press during roll-up.
The uniqueness of LiteSpeed technology is that the coating liquid is aqueous, it can be imaged with standard 830 nm thermal imaging technology; it is a non ablative technology, so no vacuum or other cleaning provisions are required for debris removal; and it offers the press latitude of a conventional printing plate, because it prints from a highly hydrophilic substrate. For more details read the publication in in the link in which it appeared : :-http://www.imaging.org/IST/store/epub.cfm?abstrid=4687  (The article is based on inputs from the abstract in the same site and more information is not available).
One more development that I read  was that of  KODAK SONORA XP Process FreePlates which according to the Manufacturers work without chemicals and water during processing of plates. This is simply processed in a box like processor which creates image on the ready sensitive plates that reduce costs, reduce environmental impact, offer better process control with  no conventional processing equipment or chemistry to deal with, etc.  SONORA Plates can be mounted on the machines and  printed like any other plate. This also free up space by eliminating processing equipment. Newspaper printers can get to press quickly by eliminating the processing step, along with its costs and variability, without sacrificing imaging speeds, automation, quality, and run lengths. 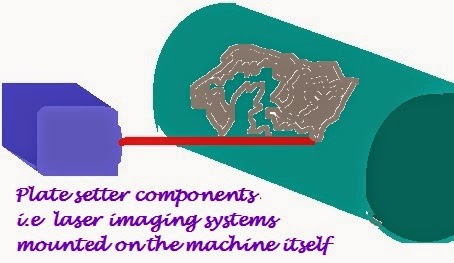 SONORA XP Plates can be imaged on KODAK TRENDSETTER, KODAK MAGNUS, or KODAK ACHIEVE  Platesetters, and are qualified for many other thermal platesetters as well. SONORA NEWS Plates can be imaged on KODAK GENERATION NEWS or KODAK TRENDSETTER NEWS Plate setters.
Kodak claims that the Sonara XP plates are capable of running on sheet fed, heat set web, and commercial cold set presses. They can run applications such as commercial print, newspapers, offset packaging, and even short-run UV. They work with integrated and non-integrated, continuous and conventional dampening systems, and they use your current inks and fountain solutions. ( Ref: Kodak.com)
Read more on this in the White paper published from Kodak by clicking the following.
Click