Inkless and erasable ink technologies
(Written by N.R. Jayaraman)
Printing technology has moved far away from the conventional system of inking the plates or blocks for printing the images on paper. The conventional method of printing has extended its wings to Digital printing, Inkless printing and reusable paper technology, slowly discarding conventional mediums such as use of printing plates, ink and other material. In several diversions  part of technology is opening  up the avenue for  the use of the once printed paper several times without  subjecting them for re pulping for re use immediately after one time print. Also the diversion was towards no ink or dry ink technology. At the same time it is also equally true that the normal use of ink or paper for conventional printing cannot be eliminated and they have their own importance or need for certain fields.

Once print was made on the paper the same paper could not be reused unless recycled and reprocessed making fresh paper. Though these days the electronic prints i.e prints on electronic media began to be used to reduce to load of Ink and Paper which indirectly impacted the environment, still in certain areas print on paper remained necessary.

A survey revealed that it was universally practiced phenomenon by majority of users in several industries that huge part of printed copies such as recorded minutes of meetings, seminars and other discussions in use in the business firms and companies were disposed off within 24 hours and not retained permanently as they were meant to be preliminary draft or notes for discussion or follow up note of briefs for next plan of action etc and once the use of contents in the copies were over, such printed papers were discarded by shredding or torn and thrown away.

The process of producing multiple prints using stencils and copies from Xerox helped in the cause of environment control by reducing the load of liquid, oily printing inks even though those processes did not fully eliminate the use of inks in some form or the other- liquid or dry. Similarly they could also not reduce the consumption of paper as well. In pursuit of achieving ink less printing and reusable paper technology without subjecting them to re pulping immediately after one time print, world over research continued to find alternate technologies to replace ink and one time only usable paper. It was realized in the industry that even partial reduction of use of ink and paper will help in the direction of pollution control and cleaner environment from the print industry. 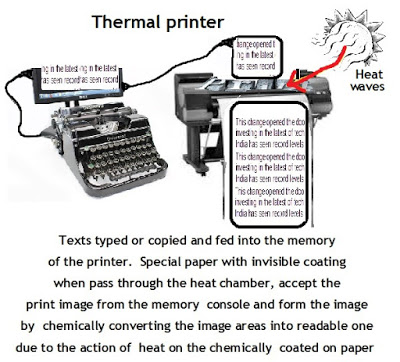 In the direction of reducing the paper and ink, first came the thermal printing machines, simpler to operate, durable and dependable for short run copies. Special pre coated chemically treated paper- perhaps embedded with some kind of dye crystals reacting to heat was used on Thermal printer. The heat beams from the machine fused the areas where the images had to appear resulting print to appear the way it was typed or fed from memory console, which in one sense was photographic based technology.

A different other thermal  machine used chemically treated ribbon which when targeted by the light beam melted the ribbon to stick to the paper surface to print the text. Mass quantity of prints could not be however produced on account of cost.  Different kinds of chemically treated  paper were also not fully Eco friendly. The recycling of the chemically treated paper for reuse posed certain other issues. Thus in this process, only use of ink was eliminated, but not the paper. The paper once used could not be reused again.

The research kept on continued for the invention of many time reusable paper with erasable ink the effort of which enabled the emergence of both ink less printing and several times reusable paper for use on Xerox and Fax machines without need to recycle the paper immediately after one time use.

Pioneers in the field of electronic products, Toshiba took lead in the innovation of reusable paper for printing (Copying) with erasable toner (ink) from its surface so that their invention would lend big helping hand towards the cause of environmental protection from print industry. The firm reportedly developed a machine that enabled the machine to erase the printed images from the surface of the paper so that the same paper can be used multiple times for printing (copying) after erasing the contents again and again. The firm claimed that the ink or toner worked like a normal ink but when subjected to certain amount of heat it became invisible print thus allowing the user to reprint some other text on the same surface of the paper. 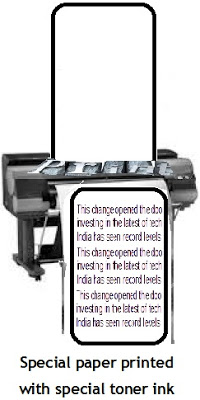 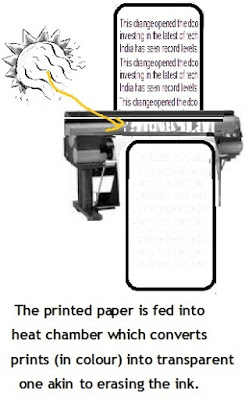 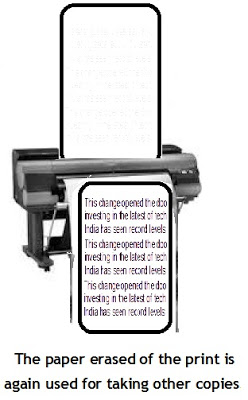 Technically the toner that had formed the image became colorless transparent one due to reaction from heat, but in effect, the toner still stayed over the paper invisible to human eyes. Once the purpose of the print taken was over, the print could be erased for reuse of the same paper again. According to the spokesman, the paper with erasable toner is reusable up to five times which may play big role in reducing paper cost. Also, in the machine which probably is still under exhaustive testing, there is an option to scan and save the printed texts and images subjected for erasing, so that as and when needed they can still be reprinted. For the present the reusable paper, toner and the unit is reportedly developed only by Toshiba.

Like Toshiba, the Xerox Corp too reportedly come out with a technology that enabled auto disappearance of the print from the surface of the paper. Though it is not known whether the machine has come into the market, the process in development reportedly is a machine whose intake was special paper for printing but the images printed lasted only for few hours i.e up to one full day on their surface. The firm claimed that the machine will not need toner or traditional methods of printing process. Instead a light beam with specific wavelength was used as writer and the image once formed as dark readable print can also be erased by heat instantly. However if left as it is the prints disappeared on its own in the next 24-48 hours period.

Thus three types of innovation under development may in future replace the ink and paper and and pave way for the introduction of many times usable paper and erasable ink. 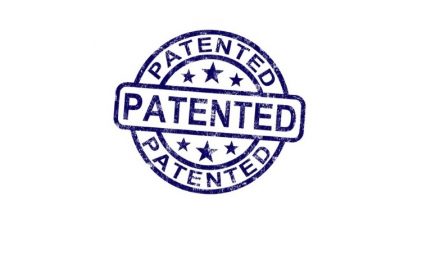 Patent For Device For Sequential Numbering Of Sheets