164)  How are the printing machines categorized?

The platen or flatbed press is one in which the impression on the paper is given by a flat surfaced platen instead of a cylinder. Both the image carrying bed and the impression bed surfaces come together and part with a jaw like motion when the impression takes place.  Only sheets format can be printed in this machine which has a flat printing surface.  Both manually operated and semi-automatic platen presses are available.

In the flat bed Rotary machines  the impression is given by a round impression cylinder against the image carrier bed which hold composed matter and blocks or plates locked in a metal frame or bed. On the cylindrical Rotary machines  a flexible plate or mold mounted on a curved image carrying cylinder gets impression against Impression cylinder when the sheets pass through both the cylinders. In both types of Rotary printing machines only sheets of paper can be printed.  The Rotary printing presses are available to print by Letterpress, Offset, Flexography, Intaglio and Gravure process.

On Web printing machines there are either one or series of print stations and the impression is given by a curved round cylinder against another curved cylinder which hold the mounted flexible plate having texts and images on its surface. Only paper reels can be fed and printed by this system after which they are cut and folded to required size and shape in converter machines which is generally attached with the machine at the delivery end. Web press is meant  for high-volume publications such as mass-market books, magazines, newspapers, catalogues and brochures. The Web printing presses are available to print by Letterpress, Offset, Flexography and Gravure process.

165) What is perfecting process of printing? 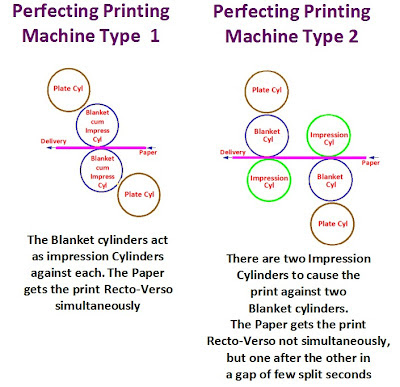 A web press (roll-fed press) is always a perfecting press because the roll of paper printed on both sides in one pass travels through the press once. The printed reel is not again fed into the press to print more colours due to difficulties in registering the already printed images on one side.

The perfecting machine saves production time because one is able to print both sides in one pass without wasting time to reload the once printed paper again for printing subsequent colours. The time wasted in waiting until one side of the sheet is completely printed,the time wasted in reloading the paper after turning the  paper registering the back side image with the front side etc are avoided or minimized by more than 75% when both sides are registered and  printed in one pass. Besides saving valuable manual labor and time, the cost of the print  too comes down.

166) What is known as Satellite Printing machine ? How does it print? 167) What are the important components of the typefaces considered in Design and Typography? 168) What is the fundamental difference in the inks used on Letterpress, Offset and High speed web presses?

The Letterpress inks will not work on Offset while the Offset Inks will certainly work on Letterpress. However when Offset ink is used on Letterpress machines while printing multi color work, the true rendition of colors will not be achieved because of different body, tack and pigment concentration in the Offset inks.

170) What is the difference between Dye based and Pigment based Inks?

Dye-based inks are used on all the Standard printers like Xerox, Laser jet and inkjet besides Digital printers. They are also used on stamping and Flexo process of printing. The ink consist of colorants that is fully dissolved and suspended in the liquid, cost lesser but the disadvantage is that they are not water proof inks. The dampness on paper or water drops will wash away or fade away the colour on print and they are also susceptible to smudging.  However certain Photo printers are also supplied by the Photo printers like HP, Canon and Epson which work on both Dye based and special Pigment based inks filled in the cartridges.

Pigment based ink consists of a very fine powder of solid colorant particles suspended in a liquid carrier and oil or solvent. They are used on printing machines, and on silk screen process of printing.

Both the Dye based and Pigment based inks cannot be interchanged and used in other processes for which they are unsuitable.

171) What is Linoleum Printing?

Linoleum printing is a print process in which sheet of Linoleum mounted on a wooden block is used as block for printing by relief process similar to that of Letterpress process. A design in reverse is cut into the Linoleum surface with a sharp knife and the cut areas pulled out from the backing on which the Linoleum is coated. Thus the Linoleum acts as the printing block to print on the paper.

The Linoleum sheet   mounted on wooden block is inked with a roller and then impressed onto paper or fabric. The actual printing can be done by hand or on  a platen or cylinder press. Generally though only water based ink is used in this process, some specially made oil based inks are also used for printing on some materials. Natural fabrics such as cotton, silk are best suited for printing with Linoleum blocks. Wool is not an ideal fabric for printing as it does not produce  crisp outline of the images due to its rough surface showing fibers slightly projecting.

The advantage of linoleum blocks is the softness of the material which allows easy cut, but the same Linoleum is not suitable for printing finer lines. This process is cheaper than other print process, but the disadvantage is that only limited copies can be printed by this process. 172) What is called Solid Ink and where is it used?

Solid ink technology has been developed sometime in 1986 by Oregon based company Tektronix which has since been taken over by Xerox Ltd which has the rights to the solid ink technology. It is claimed that the print quality allows brilliant colour definition since the melted wax creates a glossy surface across the top of the paper. Xerox claims that the solid ink printing produces more vibrant colours than other methods, is easier to use and enable to print on a wide range of media, and finally more environmentally friendly due to reduced waste output. 173) What is the difference between Laser printer toner and Inkjet ink toner?

The Laser ink is colored dry ink powder that gets transferred on to the paper and gets fused by slight heat generated by a melting roller.

The Ink Jet ink is colored pigments or dyes dissolved in the solvent or liquid and sprays them on to the paper which absorbs them into their body.