18. Reflection Copy: A design with elements of text, images and other artistic work has to be photographed to make printing plates. Some of those meant for reproduction will be opaque objects and some may be transparent. While processing the opaque objects, when the light is focused on the opaque originals they reflect back the rays from the images on to the film for recording them. Such opaque originals that are capable of reflecting back the light or emit back the light thrown on them are called Reflection copy. A negative can be made only if the light is reflected back from the original that needs to be printed.

19. Reglet: This refers to the wooden furniture in the form of sticks that are used for filling the space in the metal frame that holds the composed matter for printing on the letterpress machine. They are also called wooden spacing material or wooden sticks and comes in various thicknesses, all indicating the thickness of Riglets in point size. 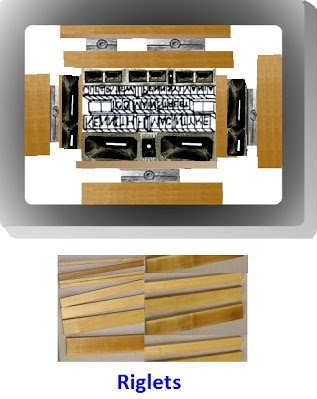 20. Reprint: To print the already printed book either by photo mechanically copying the book or re composing the matter and then print it as second, third fourth and so on editions. The year of editions will be printed on the back side of the title page or opposite to the contents page. The reprint will also indicate how many copies each edition have been printed. It may be so that the original book may have been released as hard cover or deluxe edition and the reprints may be paperback edition. That will depend upon the audience response which the first edition may have received. When the hard cover or deluxe edition is printed again such books will be called reprints.
The second form of Reprint is that the originally printed book may have been found having several mistakes and to correct them the pages that contain the mistakes may be re printed and inserted before the books are bound. Such printed stocks are also called reprints.

21. Re-etching: Re etching means performing the process of etching once again. Etching means removing certain portions of the metal using acids which bite the metal and dissolve them. The re etching is done on the plates processed in the plate making department while preparing plates for printing .

For printing the illustrations by  Letterpress process  blocks are required. The relief plates or blocks are made using negatives, and after exposure the non printing areas are etched out. When the depth of the relief image are found to be not deeper, the Re- etching of the plates (Zinc or Aluminium or Copper plates) using certain acids are done. The Re-etching with milder acid is done till satisfactory relief is obtained. The re-etching is mostly done mostly on halftone blocks to get clearer images. The use of acids to eat away further metal is known as Re-etching in letterpress printing.

Similarly when the plates for Offset printing is prepared, one of the plate making processes employed is called deep etch process.  This process involve use of certain acid based chemicals/ solution to strengthen the image area or to clear the non image areas.

In the Deep etch process, after the plates are exposed with the positive, the image area is slightly etched to create s small level of pit (less than half micron) and then high ink receptive lacquer will be filled to level the surface on par with non printing areas. The liquor in the pit will fill up the pit to from the image area. If the etching has not given the desired result, the plate is again Re-etched with milder acid solution to ensure that the lacquer sits well in the etched area to give clean image. Therefore the use of acids to create pit in the metal is known as etching process, and when the etching is repeated to strengthen the pit it is called Re-etching process in Offset Plate making.

This process is different from surface plate making process called albumin process where no etching process is involved in any step after exposure.

The plate making process for  Gravure printing process also involve  etching process. The image areas are etched to carry the ink. When the initial etching has not given satisfactory level of depth, then the plate or cylinder is again etched to make them deeper. Further etching to strengthen the depth is known as Re-etching in Gravure process of printing.

22. Royalty : A percentage of a book’s listed price paid to the author of the said book. Royalty will not be paid on the no of books printed, but only on the net sales of the book after the book is released in the market. Royalty agreement between the publisher and the author is always entered into before the books are printed and released. The Royalty has several clauses including for the reprint order.

23. Rosette design : The cluster of dot pattern created by the halftone dots in the multi colour printing is called the Rosette. The Rosette pattern will not be uniform in either the three or four color halftone printing. It will keep varying from reproduction to reproduction as different screen angle and screen lines are used. Because the dots sit at an angle and overlap each other,the design pattern formed in different angles or patterns are known  as Rosette . 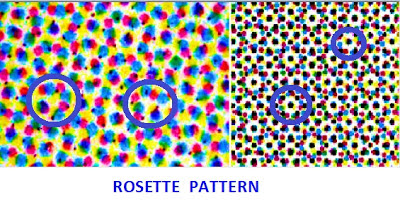 24. Run on: Every job will have minimum quantity of prints to be made against the accepted work. There may arise occasions when the running jobs may be revised and increased (not decreased) before completion of the job. Both the printer and the specific client may be aware of such work. Therefore as a measure beneficial to both the parties, the parties may agree to have run on prices, i.e. rate for minimum order, and run on price per each additional copies in thousands. For example, the rate of printing 5,000 copies may be X price. For each additional thousand copies up to 10,000 copies the price could be X-1 and for each additional thousand copies beyond 10,000 could be X-1.5 and so on.

However one important point in this agreement could be that the order will be enhanced before the job gets completed. Such jobs will be called Run on jobs.

25. Run in : Run in is a proof readers mark. Proof readers mark that indicate that the running  text matter should not be broken to start a new paragraph is called Run in.

26. Ragged: Text with irregular line lengths set to a maximum width or the texts aligned to the left side and continued without justifying the line is called Ragged text composing. 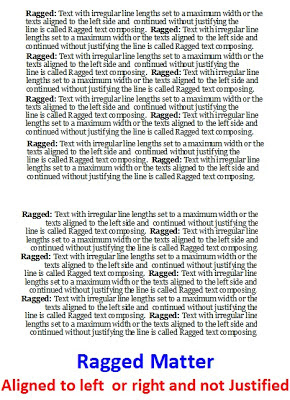 27. Reducing glass: As the smaller negatives or positives are put on the enlarger and enlarged images seen, to facilitate the Designers and Artists to visualize the reduced format of the layout and other images, a hand held magnifier type of reducing glass is used. It can show the illustrations in the reduced form. The equipment has a lens or curved mirror that produces an image smaller than the object observed. 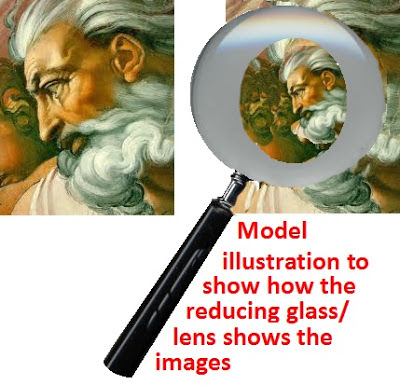 ………..Additions to alphabet R to be continued under R/5