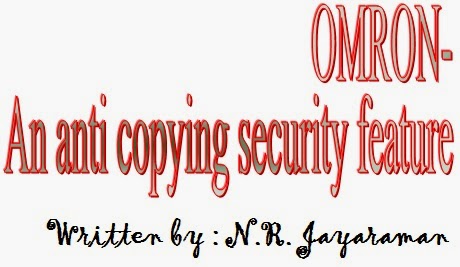 Thanks to the intervention of one of the software companies originally established for electronics, namely Omron from Japan, who came out with a effective solution to counter the menace expected out of Colour photo copiers. The firm created a unique design in the form of some circles with outlines for use as design element and when they were merged with the the main design element and printed in Dry Offset base printing, photocopying on the colour copier could be checkmated as the resultant colour print will leave a void in that area. Since the feature will be same in appearance in any of the Currencies that incorporated this mark the colour copying of those currencies would remain difficult.

The name OMRON feature could have been given as the pattern resembled that of group of stars akin to its design which were known as Omron rings or called EURion constellation. Also the possibilities of the name Omron deriving from  the name of Omron Corporation cannot be ruled out as it was Omron who invented it. Omron originated in an area of Kyoto called Omuro as  established by Kazuma Tateisi in the year 1933, and incorporated as registered company in the year 1948. However the firm itself who invented this mark as anti copying feature did not give the feature any official name. 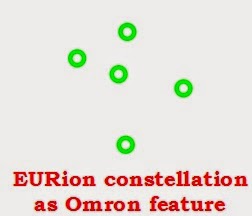 The marks in Omron pattern will be of specific size,thickness and will have specific no of circles, and placement prefixed  in the marked area besides having specific colour density range. Beyond this, the technical details on the pattern and detection algorithm  which have been carefully designed  by Omron Corporation have not been revealed and held back as closely guarded secret. The design and size of the Omron mark shall be as per the master film provided by the SSG-2, the film supplied by the firm itself and should not be altered in any manner,lest the anti copying feature will fail to work.

Effects of altering sequences of printing